Sitting on a restaurant patio in Montolieu, we overheard some locals complaining that their fellow villagers weren't doing enough to prettify their houses and businesses - that it was embarrassing when compared to all the flowers and bright shutters of, say, Saissac. This was odd to us because we had spent the day wandering around Montolieu gobsmacked at how gorgeous everything was.

I guess I could see their point: some of the streets just had rows of house-fronts right, without extravagant decorations. But 'drab' in Montolieu was prettier than most streets in North America: 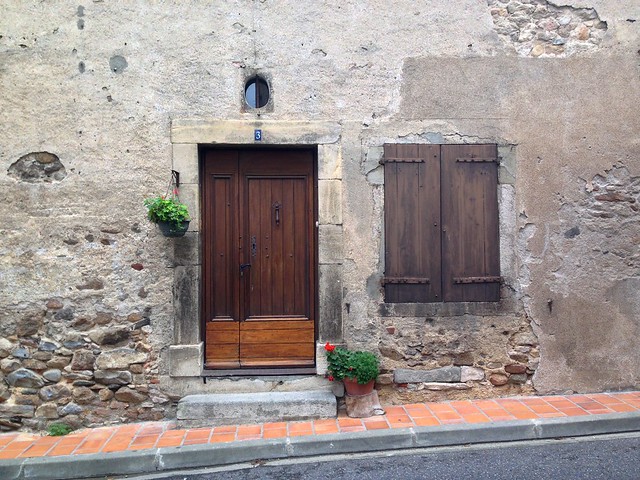 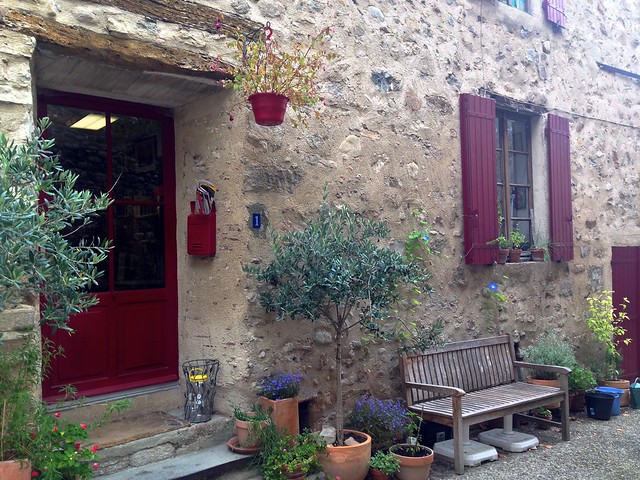 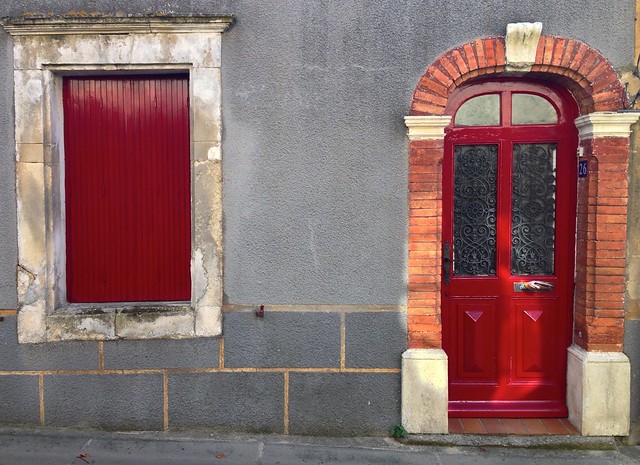 North of town, the main road runs along the edge of a rocky ravine. Looking back, you can see that some of the houses that look 'bland' out front have gorgeous balconies out back. 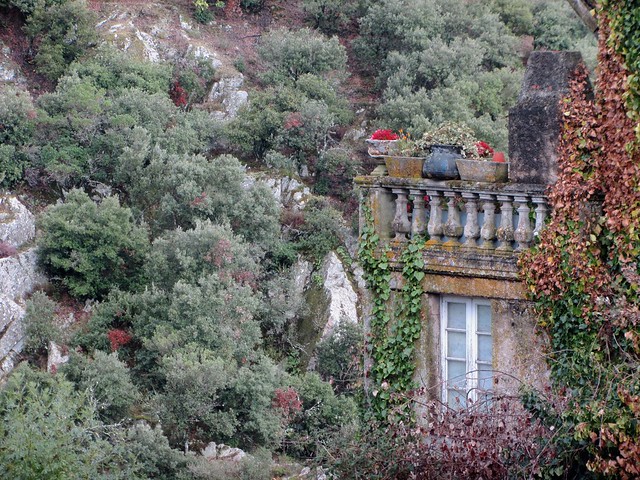 I guess some locals prefer to decorate for themselves than for the public? Here, that balcony is so gorgeous, it deserves a close-up: 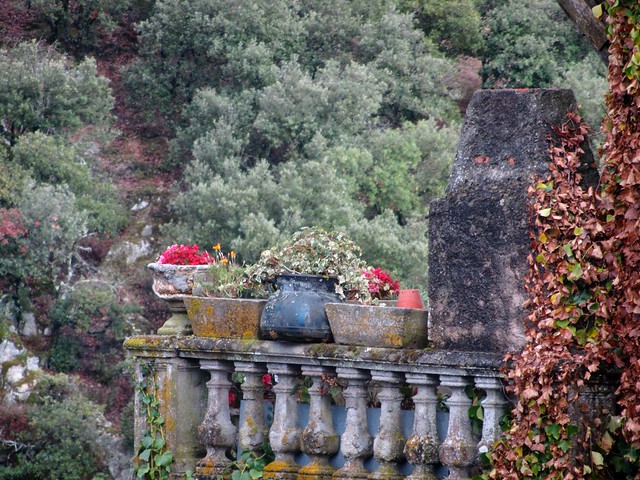 This is a perfect example of what I discovered in southern Europe on this trip: moss and overgrowth aren't a nuisance here as much as an enhancement to decoration. A similar balcony in, say, California (which has a similar climate) would be new and clean and, to be honest, a lot less charming and more boring.

I sort of fell in love with this balcony (I seemed to fall in love a lot in Montolieu), and I even went back the next day when it was sunnier to get some more pictures of it: 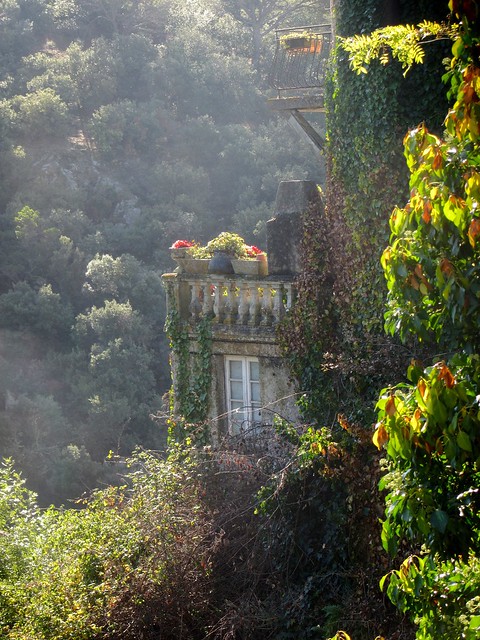 The road northward turns a bit and gives a view all the way back down the valley. This is, I guess, considered a 'wasteland' in town, but it's still ridiculously scenic by my standards (the dramatic clouds probably helped): 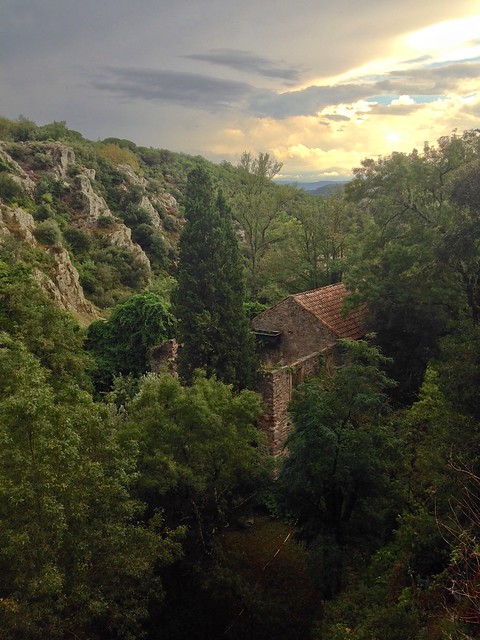 And yes, the sharp-eyed of you might have noticed something weird in the above photo: "weird, it looks like a bathtub hanging on that wall". Well, that's exactly what it is: 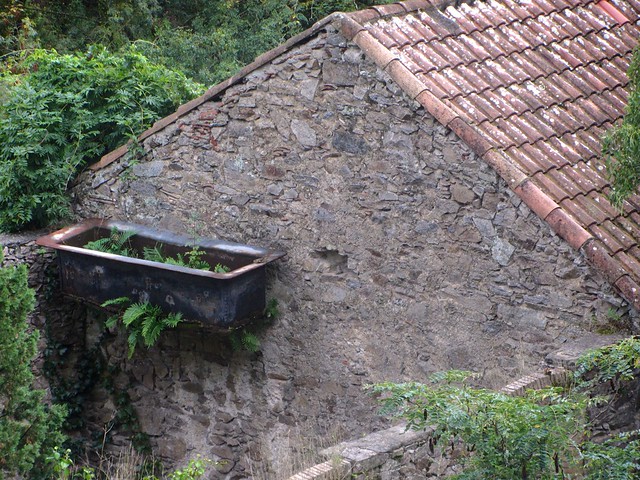 I'm not sure whether it was added on purpose as some kind of planter, or whether the rest of the bathroom fell away and it was left suspended there. Anyhow, I'm pretty sure Martha Stewart never thought of this. But even this is beautifully rugged.

The baseline for pretty or scenic here is just different. Even casual little planters have a perfect mix of charming and rugged:

The south end of town is a bit newer and perhaps a bit less ruggedly charming. However, it's the location for what might be the most stereotypically French picture I took on the whole trip: 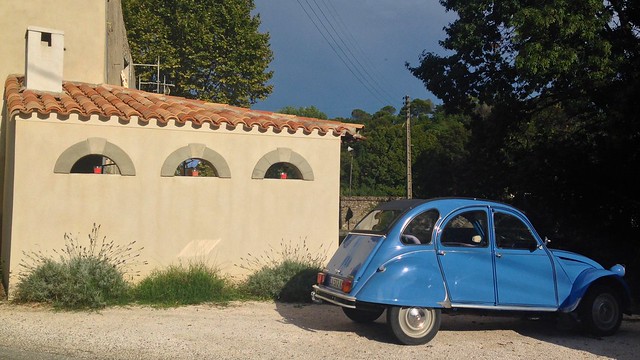 Nothing says France more than a pristine brightly-coloured Citroën 2CV!