We gave ourselves two nights in Montolieu and a whole day in between for exploring the town. Besides the bookshops and book museum, Montolieu is an interesting little town for wandering around. It's built on an outcrop on a hillside, so it's long and narrow, and still has its medieval street layout. This makes for a series of longer roads crossed by smaller streets, sort of like a much tighter version of Manhattan. 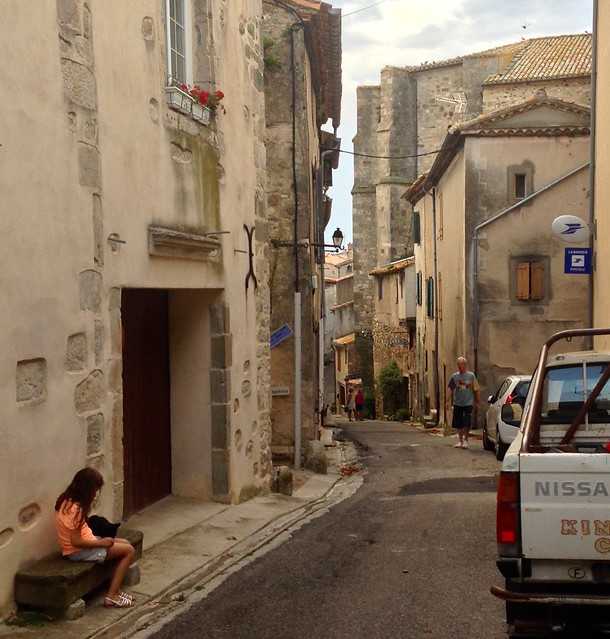 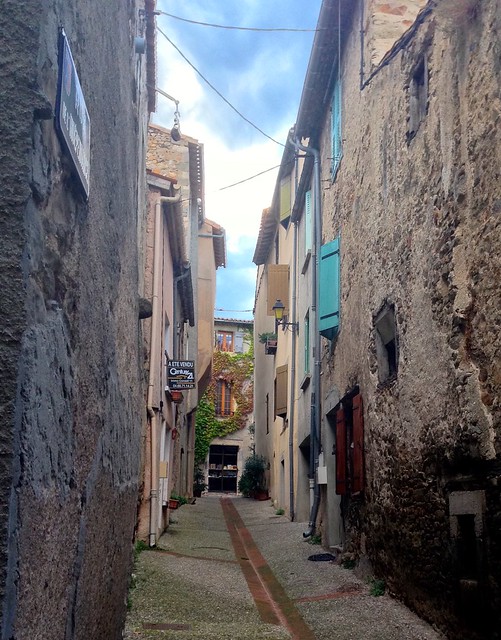 The south end of town has a little bar/restaurant with a lively patio, popular with locals. We spent a lot of time there, people-watching and chatting with other tourists. We found that knowing English and French was enough to be able to converse with Dutch, German, and Swiss people without too much difficulty, even though we didn't know their languages directly. 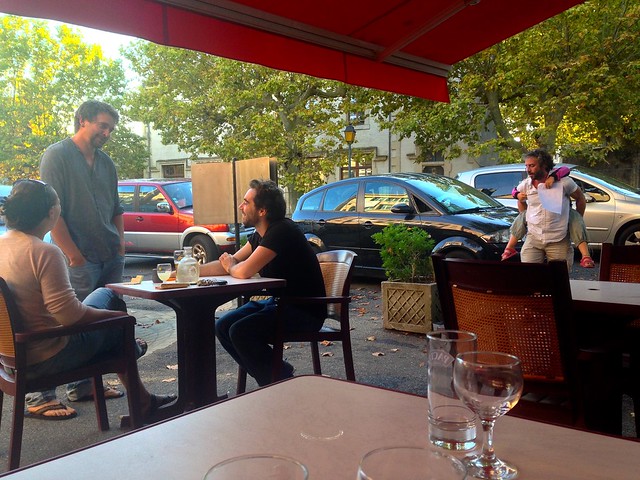 There are few things more pleasant than a small-town French patio in the late summer.

Near the patio was one of the coolest things we had seen on our trip so far: 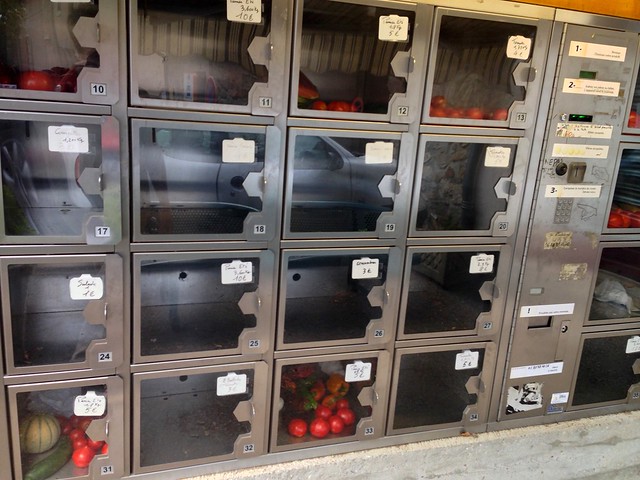 It was a local organic produce automat! Instead of a market (although I'm sure Montolieu has one of those as well) local growers simply stock up this machine with collections of tomatoes, onions, peppers, watermelon, etc. and people can come by any time and put money into the machine to buy it. Here's a close-up of one of the windows: 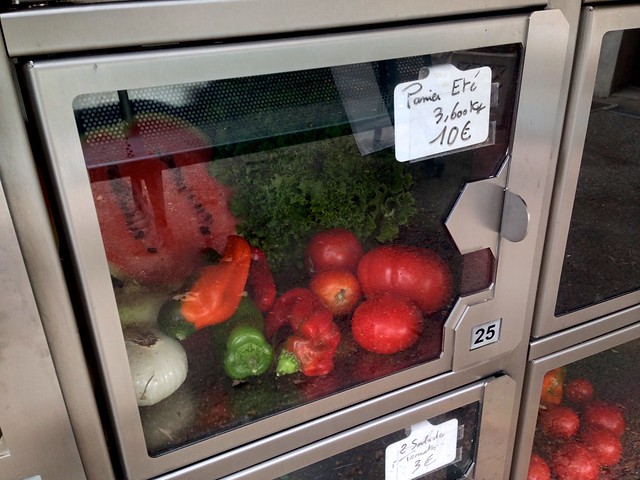 The north end of town has a complicated intersection with narrow roads, and RVs and shipping trucks often just barely scrape by: 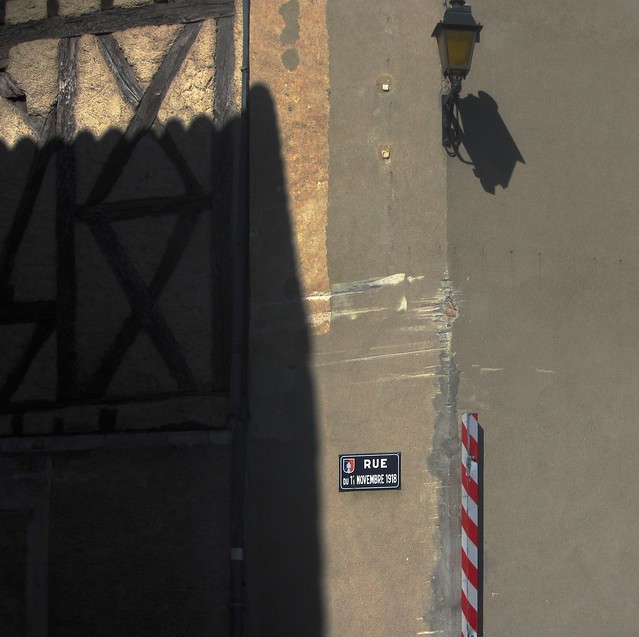 A lot of the decorations in town play with the book theme: 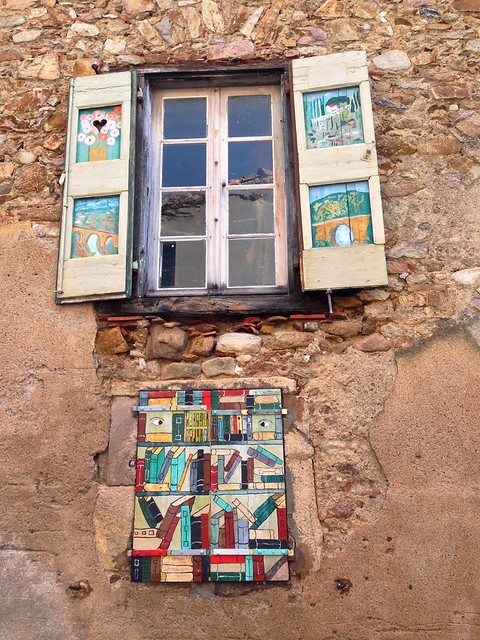 There's a lovely sculpture in a pretty square: 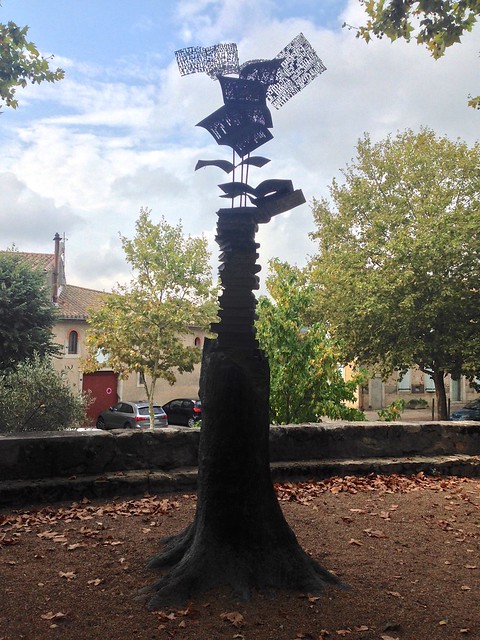 Looking at the decorations and signs around town, we were surprised to find vintage signs for Canadian-made farm machinery: 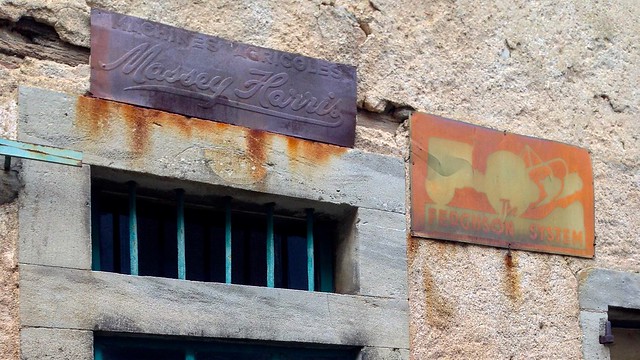 That's Massey as in Massey Hall and Harris as in the family of Lawren Harris and that's Ferguson as in the still-making-tractors Massey-Ferguson.

The church in town is a bit larger than the tiny village churches we had seen so far on our trip. The bright southern sunlight makes stained glass windows cast dramatic patterns on the floor. 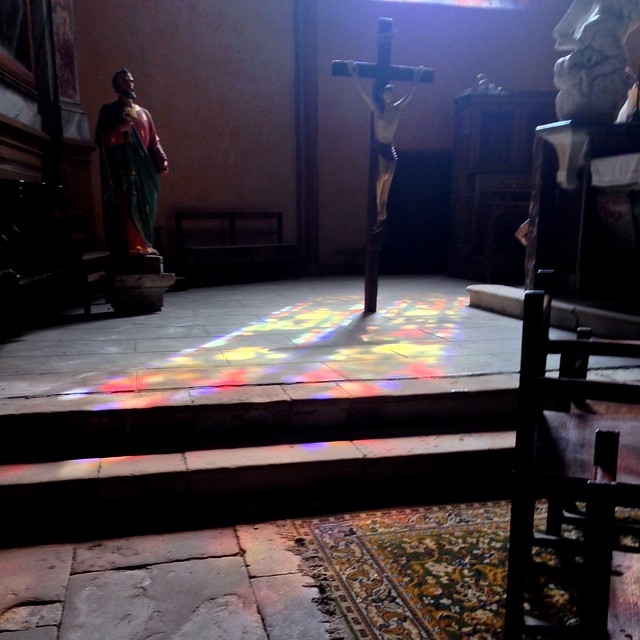 In the back was a memorial shrine to locals who had lost their lives in WWI, with an additional plaque above for someone who was killed in 1951 in Indochina - France fought and lost in Vietnam decades before the US got into it. Of course different countries have different memorials for those lost in different wars, but seeing it directly here brings what can be abstract history home. 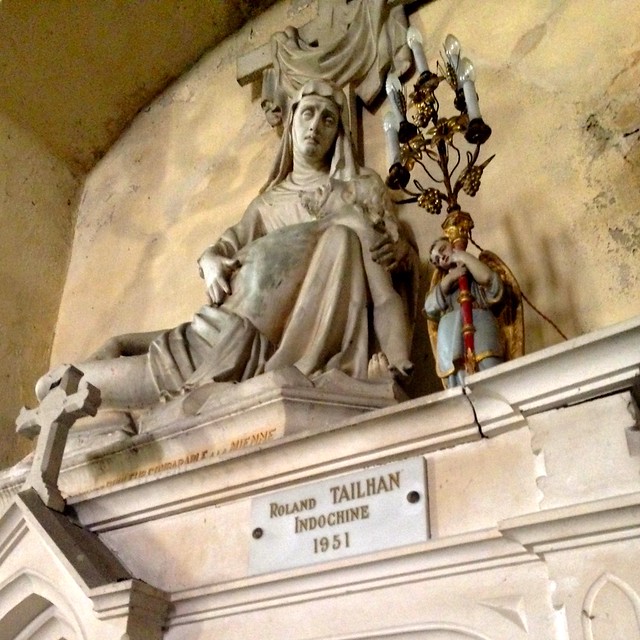 We saw our old friend Saint Anthony of Padua: 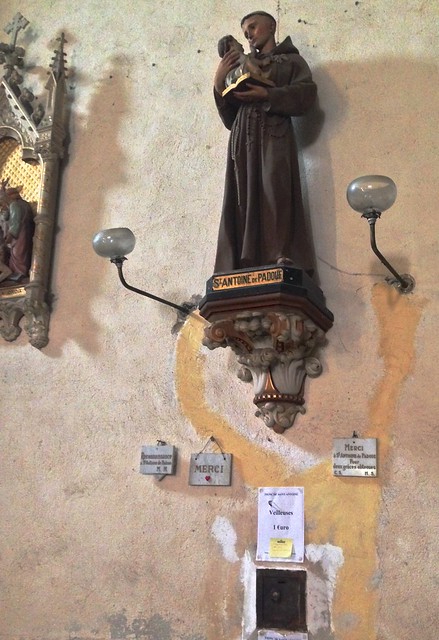 Our favourite thing about Montolieu, though, is that the place is owned by cats: 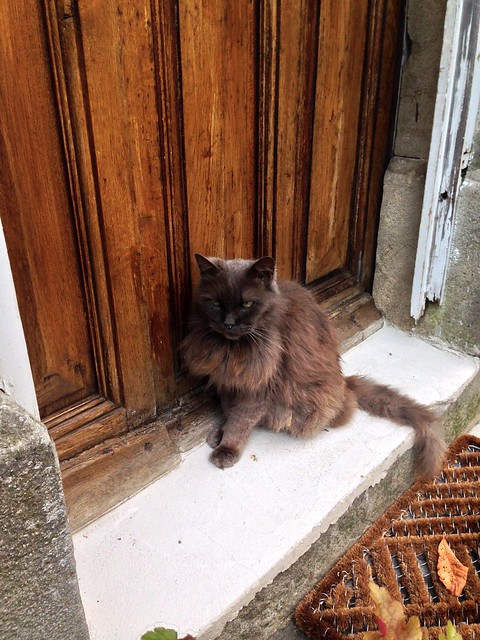 Sometimes they seemed pretty happy to see us: 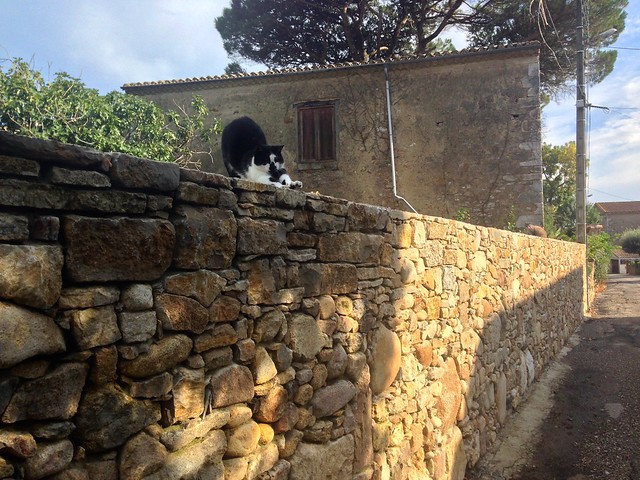 Sometimes I felt like I was interrupting Important Cat Business: 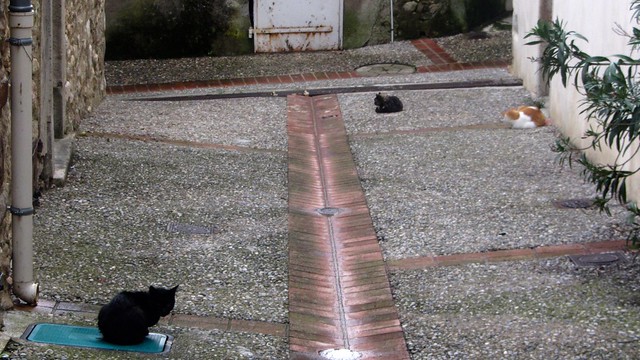 Or that I was just generally in the way of where they were planning to go: 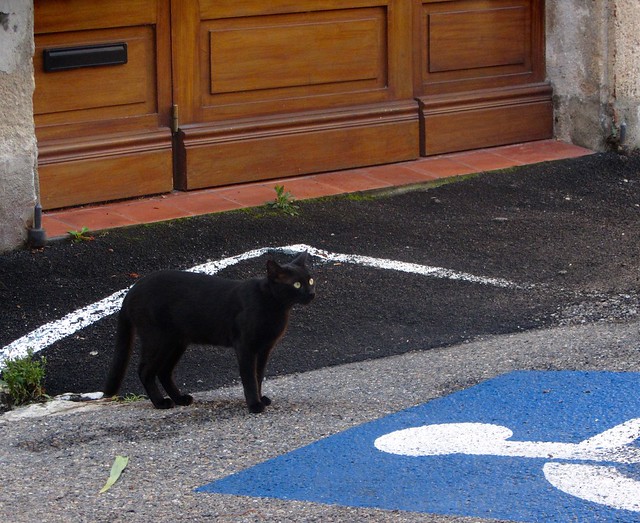 Even in our B&B, the resident large grey cat managed to force his way into our room in the morning and said hello. French cats seem to be even more socially forceful than North American cats. 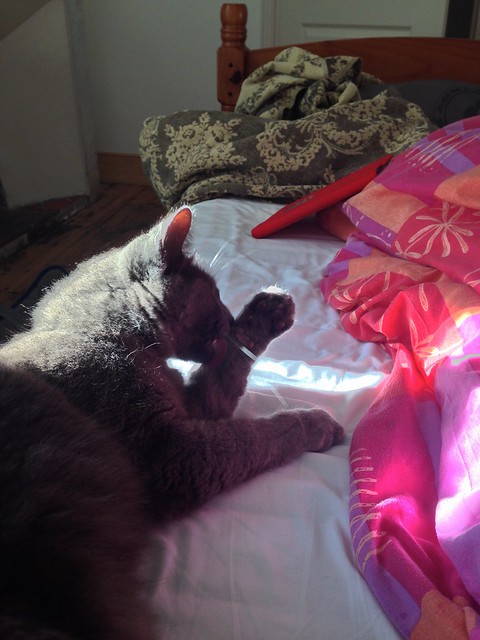 The owners apologized, but we were missing our own cats back in Halifax, so it was actually kind of nice.