I'm a big fan of comfortable beds, but my first night in a tent in a while was less troublesome than expected. We got started relatively early, breaking our fast with cold sausage, bread, and Nutella, as well as some surprisingly good instant coffee. I had forgotten that European instant coffee is actually quite good. While "Nescafe" is popular, I think it is mostly considered a different kind of coffee-like beverage.

We packed up the tent, noticing a cool-looking bug with antennae on its long snout. 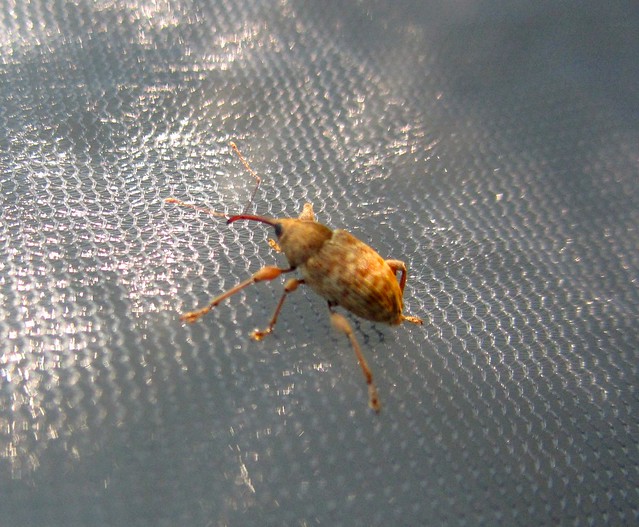 The host asked us if we were really hiking all day, and we said indeed we were. He shook our hands generously, but I think he considered us a little bit insane.

The first part of our walk took us past a tile factory and across farm fields. We were walking on main paved roads for this stretch, and cars kept zipping past us, feeling uncomfortably close.

Out here in the country among the trees I kept hearing a bird-song that reminded me of the main theme from the last movement of Beethoven's "Pastoral" symphony. I'm guessing this same species of bird, or at least something like it, sings in the hills around Vienna.

Speaking of music, I decided to not listen to music or podcasts on headphones while I was on this trip - the whole point of hiking is to experience the landscape that I'm passing through, and that includes the sounds. This meant that I rediscovered how long walks make my mind fixate on music - and often strange hybrids of music that then stay in my brain for days. For various reasons, I had Bend Sinister's Queen-like economic justice piano anthem Don't Let Us Bring You Down on my mind. Fair enough - but then I matched the piano coda at the end of the chorus to the lead-in to the vocal acrobatics of Pink Floyd's The Great Gig In The Sky, which then led to the similar chords and piano stylings of Sloan's The N.S.

So as I hiked the sun-drenched hillsides of the Aude region, everything was accompanied in my head by Clare Torry's epic wordless singing, and the tight harmonies of Halifax's favourite rock sons. 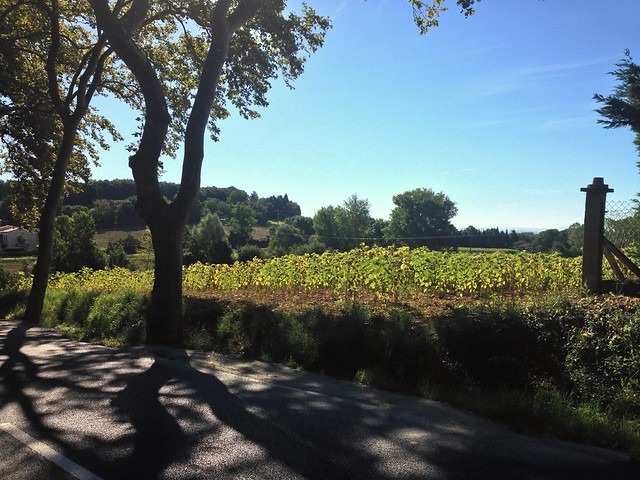 We soon made it to Saint-Papoul, a small town with a significant abbey. We took turns going in and looking around. The square outside has recently been redone, complete with angular futuristic-looking benches and lights.

Before entering the church itself, I explored the beautiful sunny cloister outside. 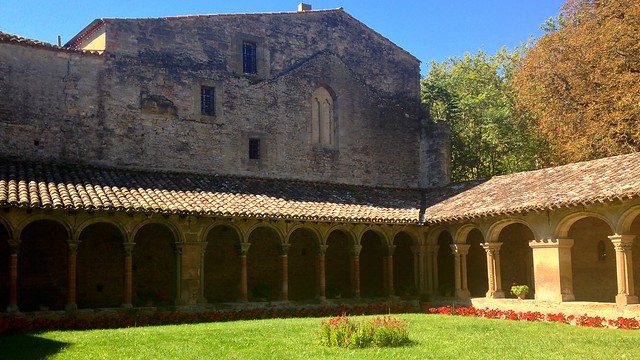 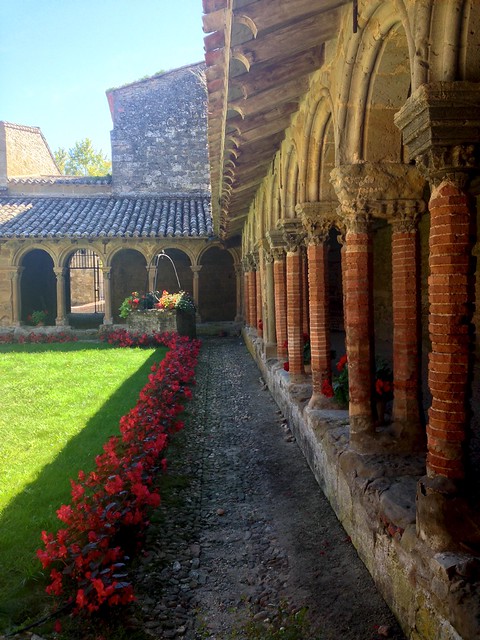 From our time in Venice, investigating the capitals of the columns of the Doge's Palace, we had learned to look more closely at the stories being told by column capitals. Unfortunately, here they were so worn out it was hard to tell what they were depicting. 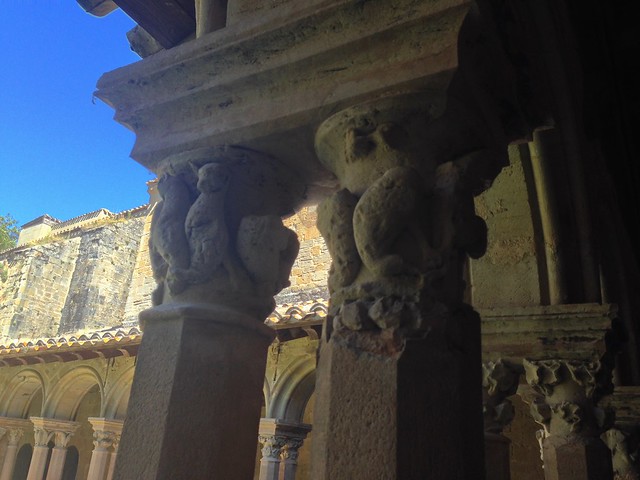 Going into the chapel proper, I discovered in a back corner, near the requisite Joan of Arc, our old friend from a few days ago, Saint Anthony of Padua. Like Joan of Arc, he seems to be extremely popular in this part of France, so it was nice to have actually been to his resting place before we came here. 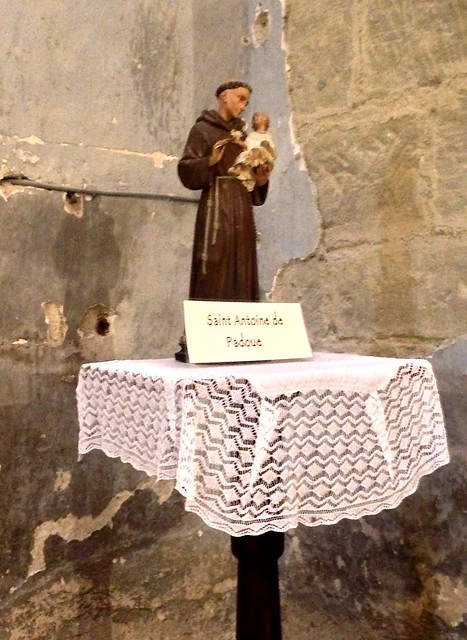 I then took a walk around the church / cloisters complex. I love how old buildings in this part of the world all have vegetation growing out of their walls and roof tiles. These were especially notable in the vivid bright sunlight. 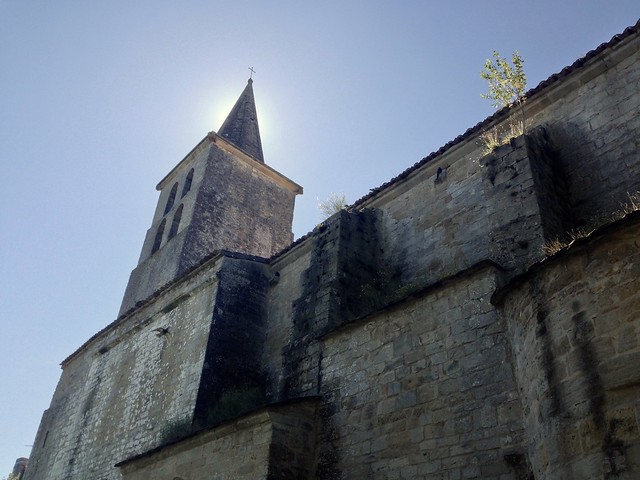 There were birds nesting in various nooks as well, making the old stone building feel more like a rocky hillside than a man-made structure. 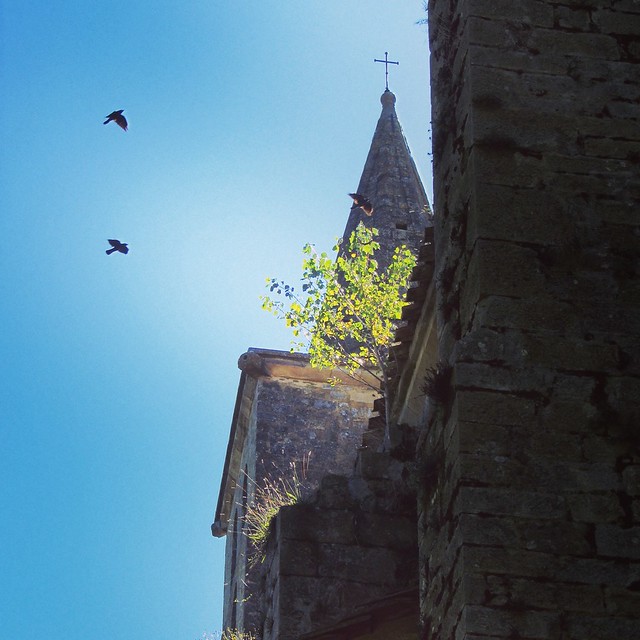 Then we walked through the town of Saint-Papoul proper. Like the other towns we had seen so far, it was also pristine and perfect. 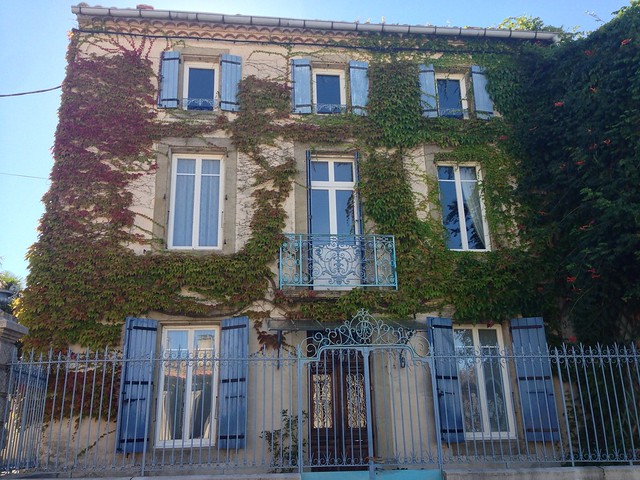 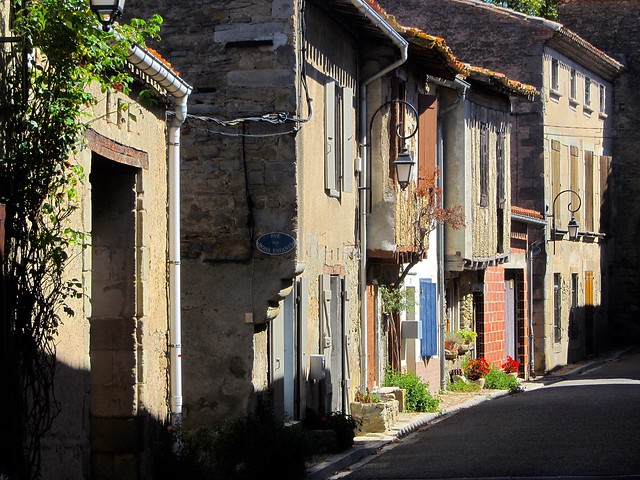 You can see the little plaque on the left side of this picture - it reads "Rue des Bons Enfants" i.e. "Street of Good Children". Perhaps unsurprisingly, it's quite short: 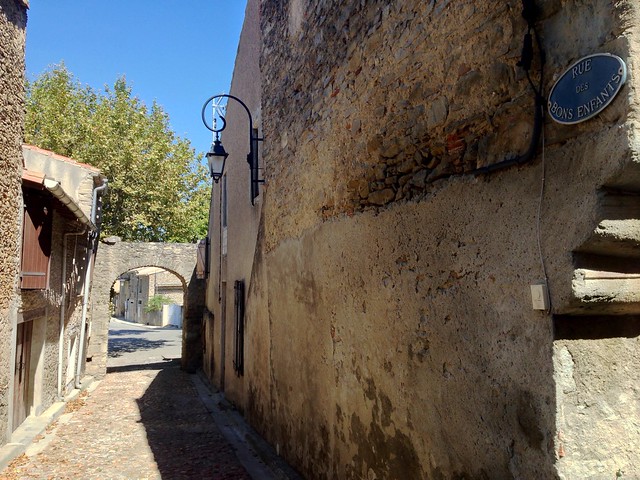 Many of the houses have square utility doors in them, often painted with lovely sun-bleached colours. I rather fell in love with this particular shade of blue, like a old favourite faded shirt: 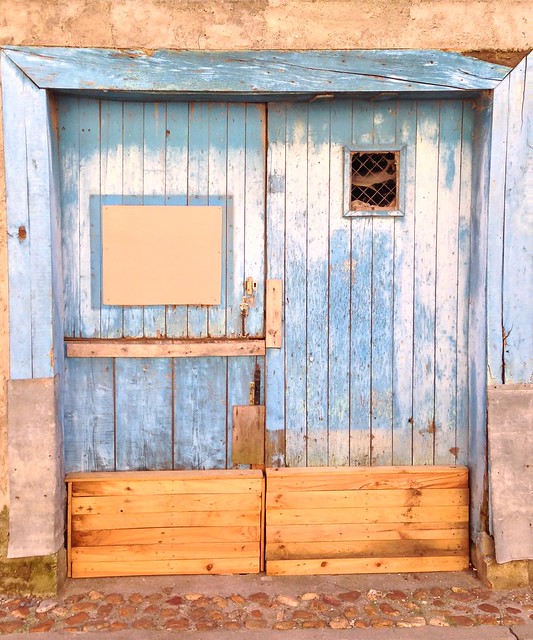 At the edge of town, we saw a rarity in these parts, a new house, still under construction or heavy renovation, in the same stucco-and-tile style as many other buildings we had seen on this trip, but all new and unweathered. It's interesting to see what construction techniques and materials are eternal here, and what has changed over time. 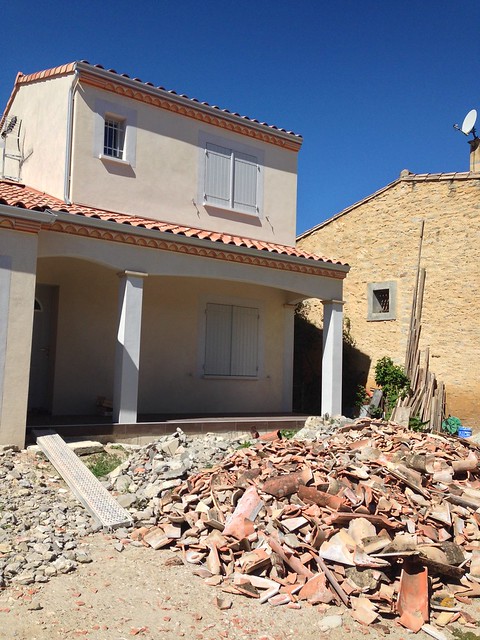 After Saint Papoul, we finally got off the road and onto hiking trails. This was part of the vast Grand Randonné network. We could continue on these paths to Mont Saint Michel or even Santiago de Compostela if we wanted. But our current destination was a bit closer. We climbed higher, and got better views of beautiful farm fields and the distant mountains. 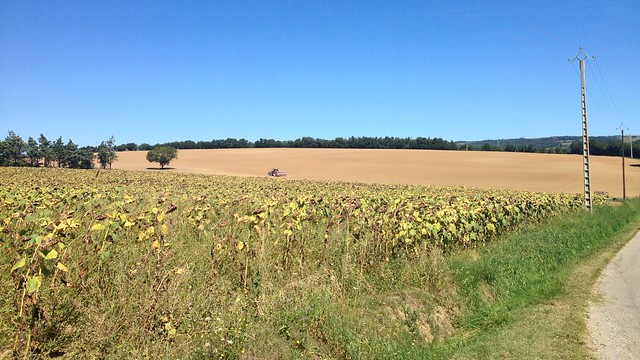 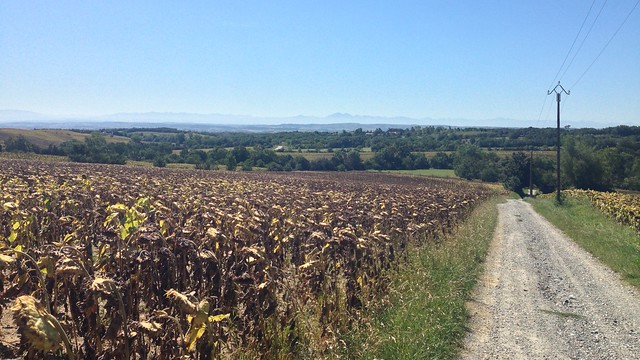 Even the roadside weeds and scrub were beautiful, dotted with brightly coloured wildflowers. 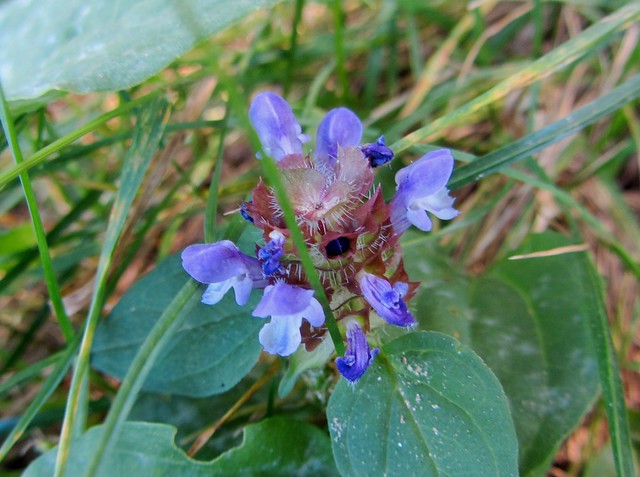 Occasionally we came across an abandoned and ruined farm building - and even these were picturesquely tumbled and overgrown. 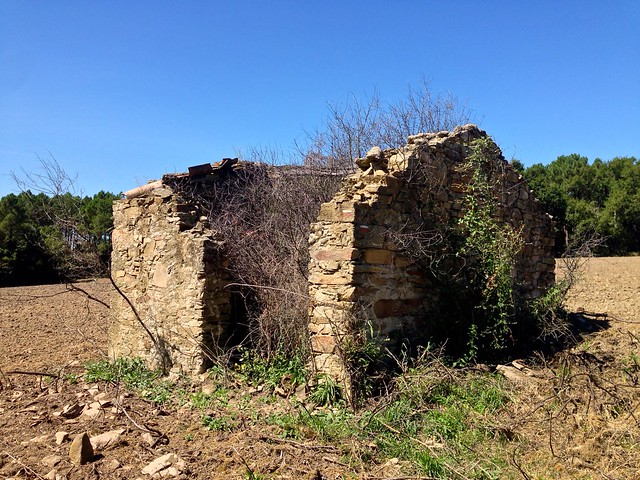 A bit more climbing and we saw the rooftops and steeple of our next destination: Verdun-en-Lauragais, another gorgeous and perfect little town perched on a steep hillside. 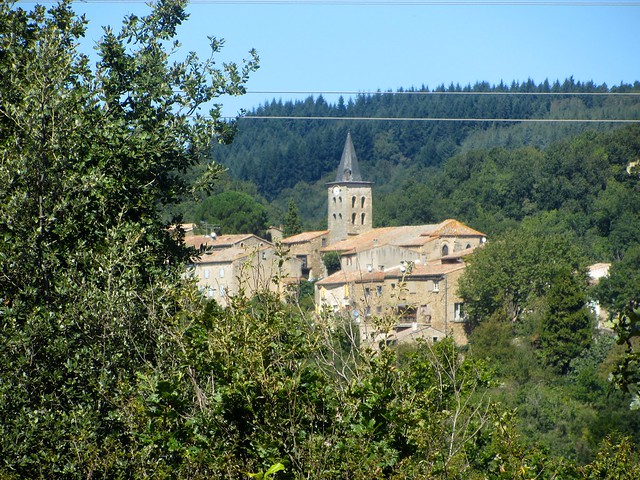 This is not the Verdun of the giant battles of WWI, but the name seems to have come from Latin for fortress, and perched like it is on such a strategic point it's easy to see why this town got the name.

We rested in a small square near the town church. 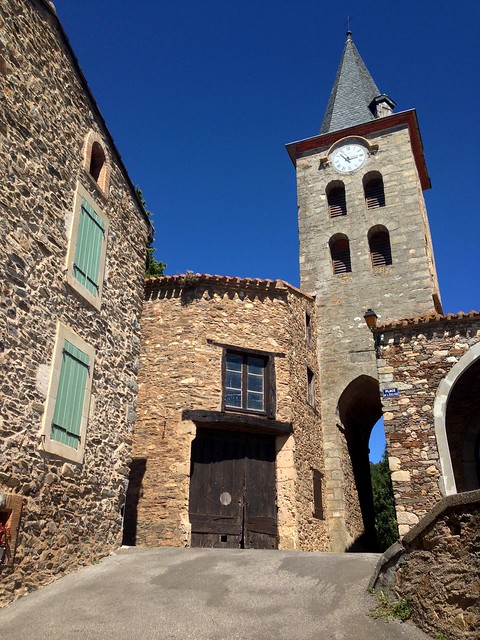 Since it was mid-afternoon, everything felt empty and abandoned, but clearly great care had been taken in keeping things well trimmed and planted with flowers. 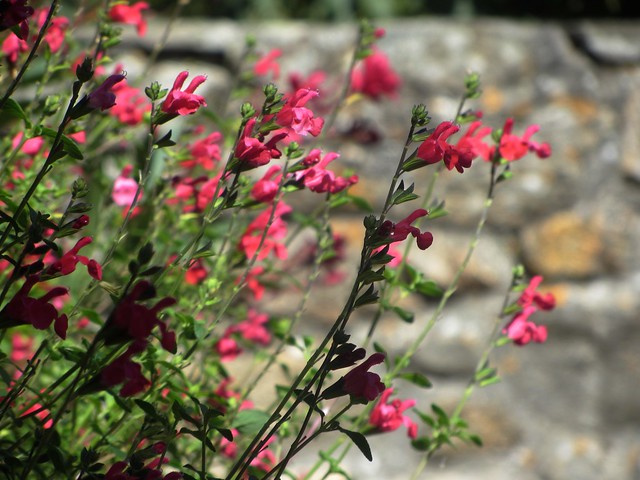 This was another church with small trees growing out of its old walls. 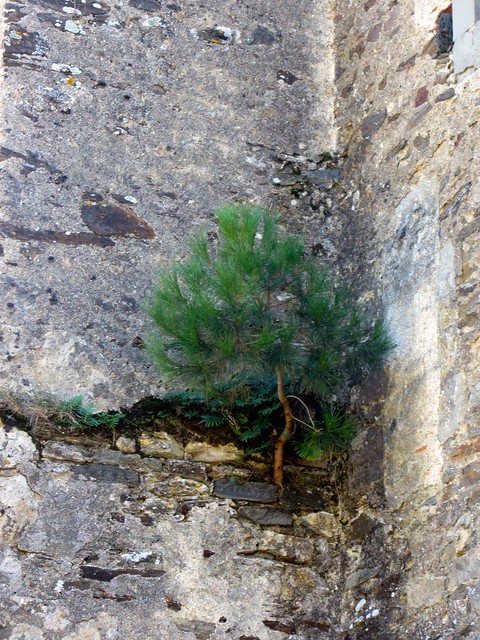 We continued through and out of town, passing lovely little homes. I guess I was overly fascinated by the the domestic architecture here, but I come from a city of little square houses with vinyl siding, sealed up against the winter - so a sprawling, organically textured house with vines and decorative plants and ancient-looking tiles seems almost magical. 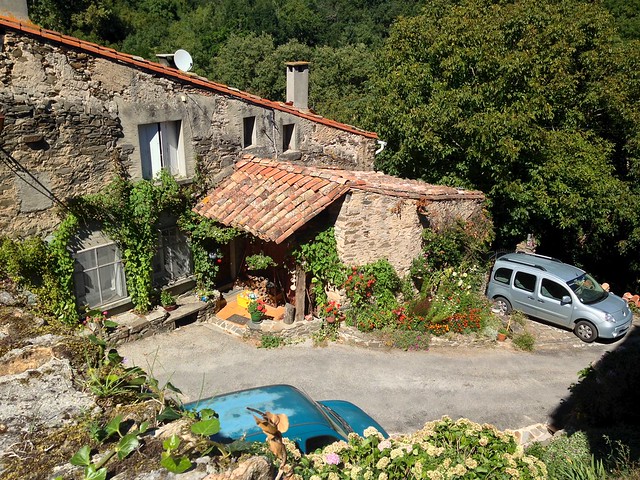 We continued up the hill, finally reaching a plateau and seeing signs for our destination: "Le Bout du Monde" - the World's End. 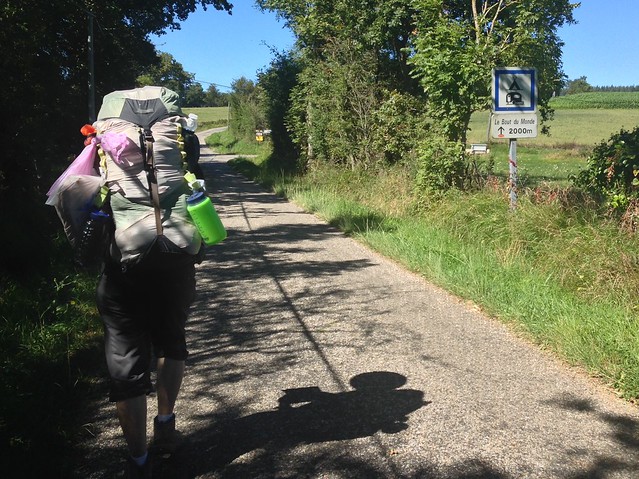 The sign saying it was only 2000 metres away was probably meant to reassure drivers that they were close, but on foot it meant another half hour or so of walking. It was a pretty walk, though, with lovely roadside flowers and butterflies. 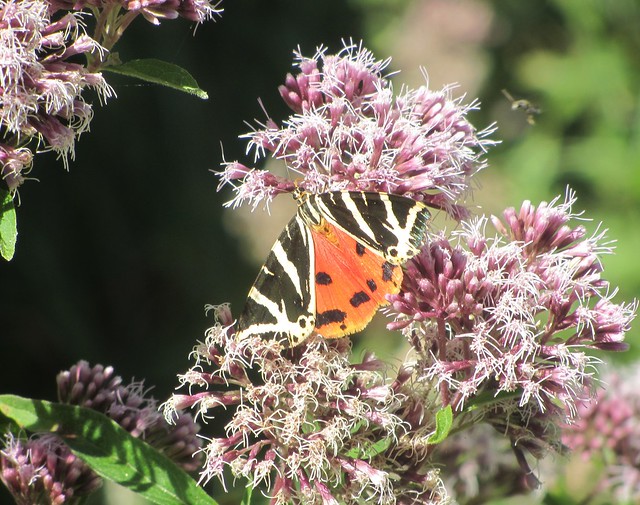 We finally made it to Le Bout du Monde, a farm-themed campground which gets its name from being right at the edge of a steep hilltop, with (yet again) a great view of the valley. 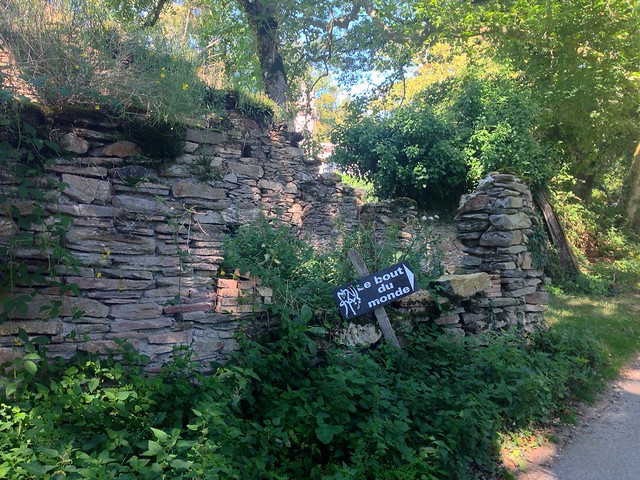 We set up our tent and had a few hours to kill before dinnertime. I sat down and read a little - and realized that I was feeling utterly relaxed in a way I'd very rarely ever felt. After all the planning, after all the catching up on work and making arrangements for while I'm away, after figuring out everything to pack for our first hiking trip, after ensuring that we made it to flights on time, after the stress of flying, after struggling to communicate in Venice when I don't speak Italian, after worrying that my French wouldn't be good enough in France, that we wouldn't catch the train, that we wouldn't be able to handle the hikes, that we would be accosted by wild boars or brigands, that we'd run out of water or twist an ankle, that this long day of climbing would defeat us - we had finally made it to this place, achieved our goals, and all the little worries and concerns slipped away.

Part of the problem with being a freelancer with lots of ideas is that I always have the feeling I should be doing more, that I'm behind on things, and that important things are being dropped. These work-related feelings often spread out into my day-to-day life. But at this one point, I was on vacation, everything was being taken care of, I had achieved everything I needed to achieve for now. It was all okay. All I had to do was sit in this dappled shade in this perfect dry summer warmth and relax.

Eventually we went down to the hillside patio, where we were able to recharge our devices and (eventually) get on the internet and catch up on email and such for the first time in several days. Some small problems had come up with work, but follow-up emails showed that they had been resolved. So I could relax, have some local wine, eat a fresh-from-the-oven pizza, and enjoy the spectacular sunset scenery below. 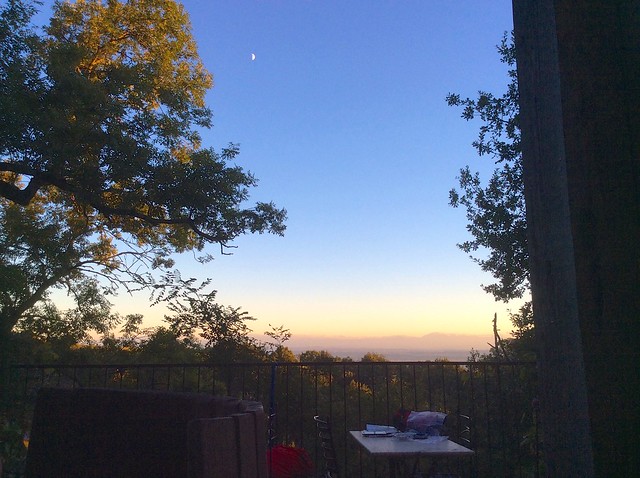