It was our second morning of camping in France, and I was still getting the hang of things. I didn't put enough fuel in the camp stove and so spent 30 minutes gently warming some water. I finally figured things out, added enough fuel, and had hot coffee in about five minutes.

While waiting for things to boil, I saw a whole troop of camouflaged infantrymen hike by, with futuristic-looking rifles - the first and last in the unit with bright orange wraps on their backpacks, presumably to keep the rest from getting lost on their training mission. I guess we're not the only people who like to hike in these hills.

As we were about to head out, Shannon laughed and said I should take a picture of myself. Turns out I had a leaf stuck on my forehead. 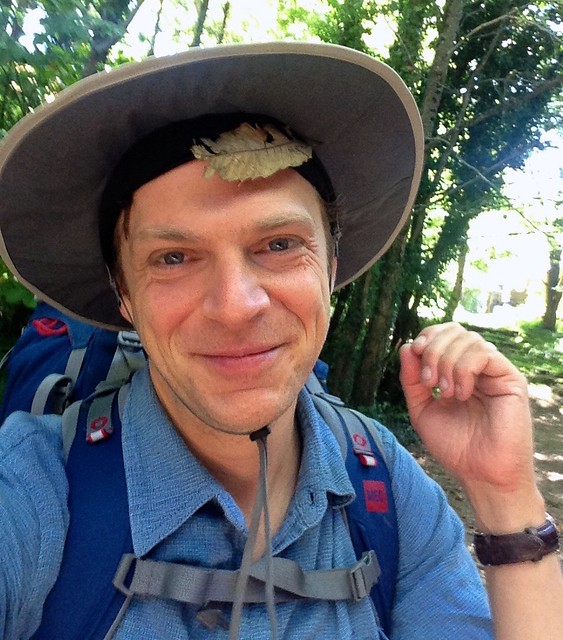 We hiked back downhill towards Verdun, catching a grand morning view of the valley below. 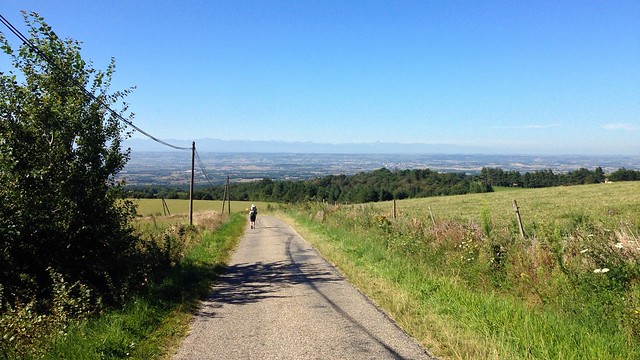 With my camera's zoom lens, I was able to make out towns and villages in the valley below - I think I recognized Castelnaudary, where we had started our hike several days ago. 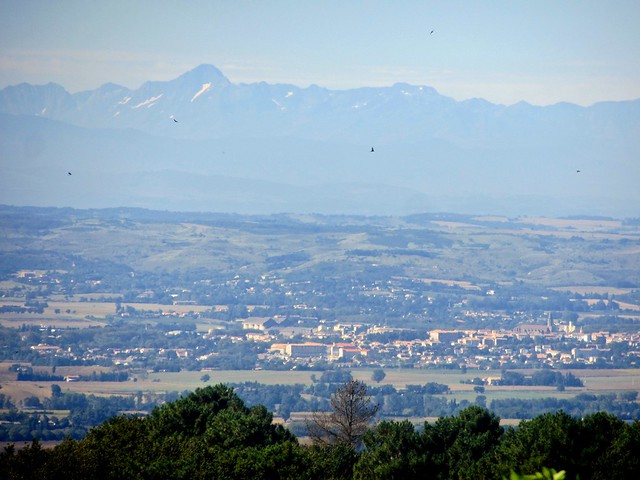 When we got into Verdun-en-Lauragais, we discovered a little grocery shop at the crossroads that was open. 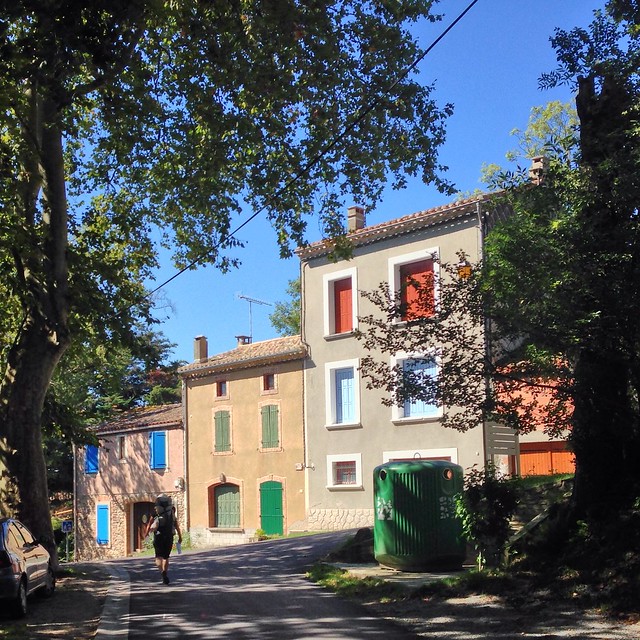 Every little town in this area had the same arrangement right 'downtown': there's always a Mairie, or City Hall, usually the grandest building in the town, and somewhere nearby a post office box and, in a green box with emergency instructions, the town defibrillator. 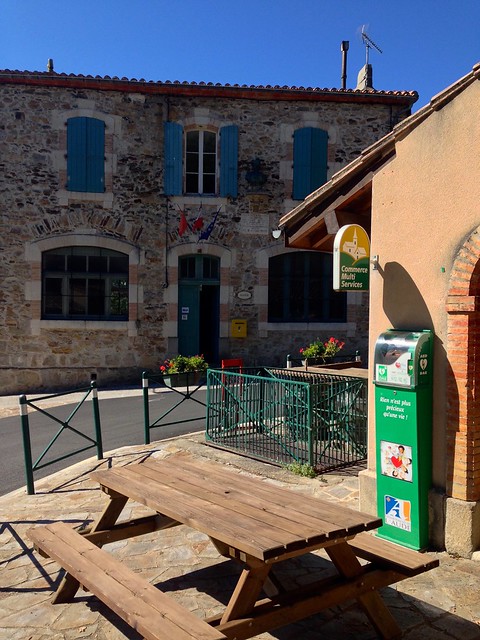 Presumably the nearest hospital is several towns away, and even a few minutes can mean the difference between life and death during a heart attack, so it makes some sense to have one of these readily available as yet another piece of the civic infrastructure.

We bought some water and snacks for the road. I've become a big fan of dried sausage for my hiking days. I can just cut a few pieces off with my knife without breaking my stride.

We turned onto a different road climbing out of Verdun. This area is clearly a popular vacation spot for French locals and even some Spaniards: the hillside above town was scattered with vacation homes and rentals, most with sweeping views of the valley.

Most of today's hike was along narrow paved country roads, with traffic zipping by. A woman in an old Renault kindly asked if we wanted a lift - which we declined, since of course the hike is the whole point of the trip. Between this and the occasional strange looks we got from passing drivers, I guess backpack hiking isn't all that common in this part of the country.

As we passed a hillside field, we found ourselves beneath hundreds of swallows, singing and swopping in a cloudless sky. 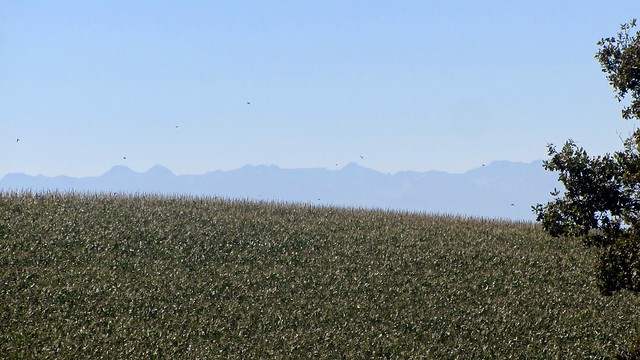 (Tiny fast birds don't photograph very well, I discovered - this is the best I could do. Click to see it in full size on Flickr.)

In the early afternoon - in the hottest time of the day, of course - we finally reached the 'peak' of this hill, with a rest area and a round legend table explaining the surrounding scenery. 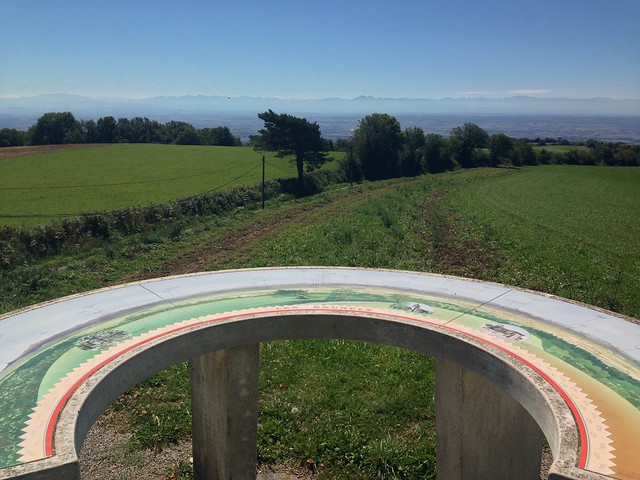 Using this, we were able to find the various towns we had passed through in our last few days of hiking. Just over a week ago, we had crossed continents and oceans at nearly the speed of sound, and now we could see several days of travel in one view. It was fascinating but also a little bit disheartening. 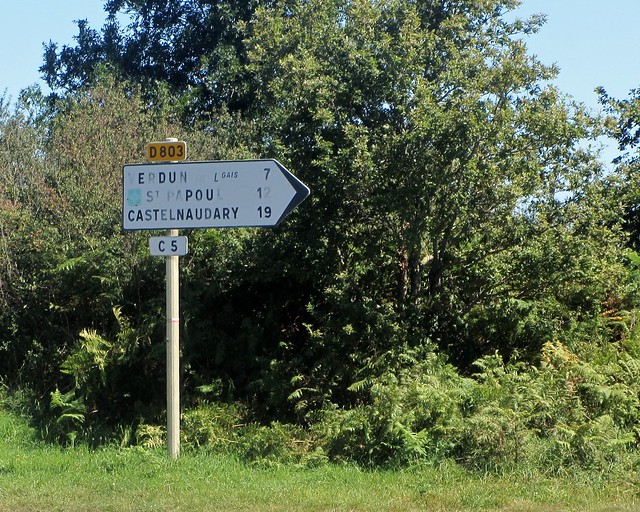 On the other hand, one of the great things about hiking in this area is that there is a village every few kilometres, since that's how far farmers and peasants would be able to travel for work or market day. Most of the history of this area involved human-speed travel, and so going through it on foot feels more authentic to the spirit of the villages and farms.

We passed through La Garde, another ridiculously picturesque small town. The main square had a giant wine press. 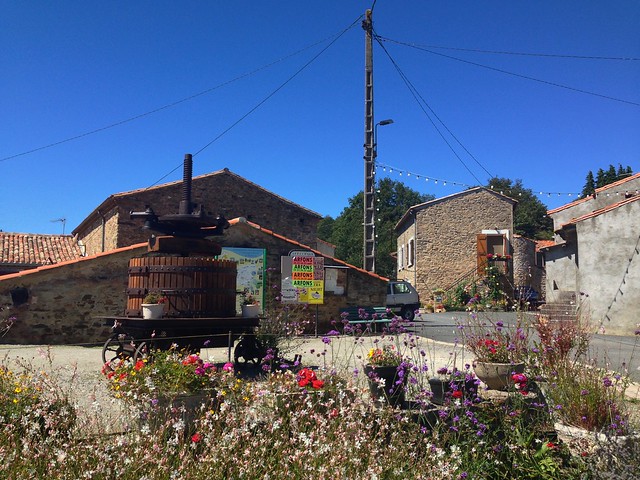 Just like other nearby towns, the message board featured ads for live shows. There's clearly a performer's circuit that goes through all these little towns, folksy types playing the church, DJs and rock cover bands playing the community hall. I wonder how much this circuit parallels the one used by the troubadours back in the middle ages?

Then we climbed even higher, into a different biome than the valley and hillsides below. We were now surrounded by pine forests, feeling a bit more North American. 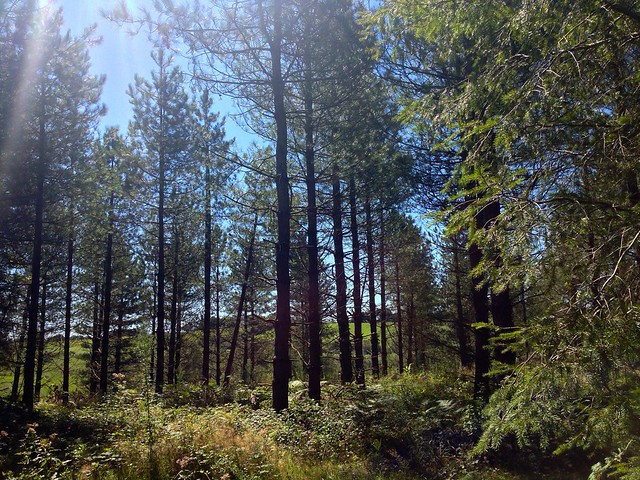 In fact, the general climate and the hills in Languedoc reminded me a lot of California. I wonder if California will seem as charming and 'lived in' after several centuries? Of course, the next 500 years will probably be very different for built form and landscape than the previous 500 years.

We had crossed over the peak of this part of the hill country, and were now descending the other side. The far horizon was flat and clear - I was already missing the grand shadows of the Pyrenees that had dominated our vistas over the last few days. 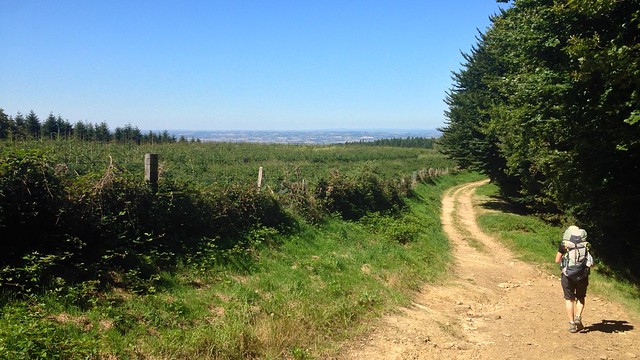 Then we started descending, back out of the pine forests and then down into Saint-Ferreol. We crossed a small bridge into a park with a small dam and a waterfall - we had reconnected with the water system for the Canal du Midi. 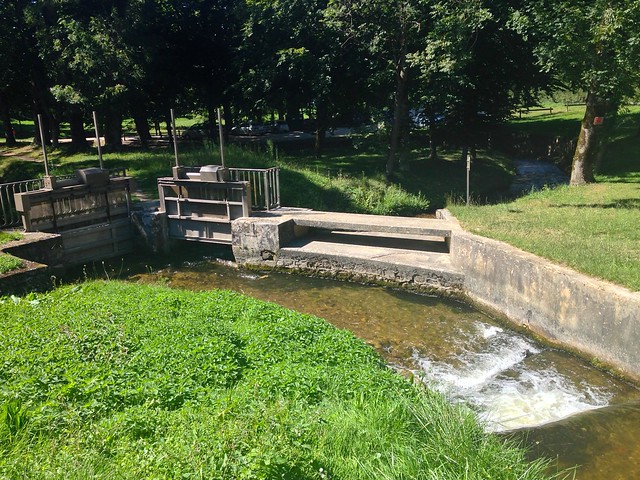 We rested in the park for a bit, seeing a lot of locals parking their cars and walking out along a nearby path. It seems a bit mean, but after our 12+km of hill-climbing with 20-pound bags on our backs, we found them so cute with their little backpacks, just in case they needed anything while going on their 'hike'. Some of them even had ski-pole-like walking sticks, to ensure they could handle a kilometre of flat paved path. So adorable!

Rested up, we joined the crowds, once again getting funny looks with our floppy hiking hats and big boots and giant backpacks. I think the French sensibility would rather be a bit uncomfortable rather than risk looking ridiculous, and we were clearly in the opposite camp.

The path wound along between a small waterway and a large reservoir, which has clearly become a popular vacation spot. We saw paddle-boaters, sunbathers, and families with excitable dogs. 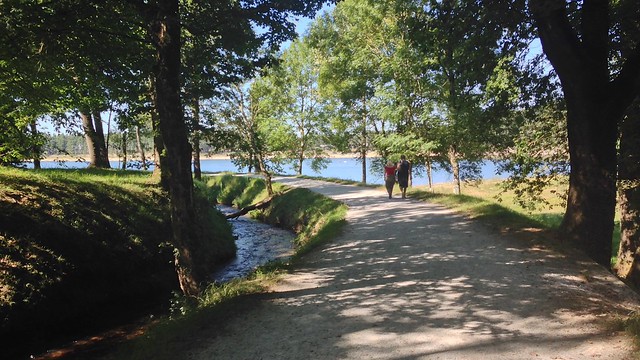 The waterway on our left turned out to be part of the "rigole" network, engineered streams that collect water from this hilltop area and send it down to service the locks in the valley below. It was a shallow stream, occasionally sealed in with bricks, tile, or flagstones, and punctuated by various gates and sluices. 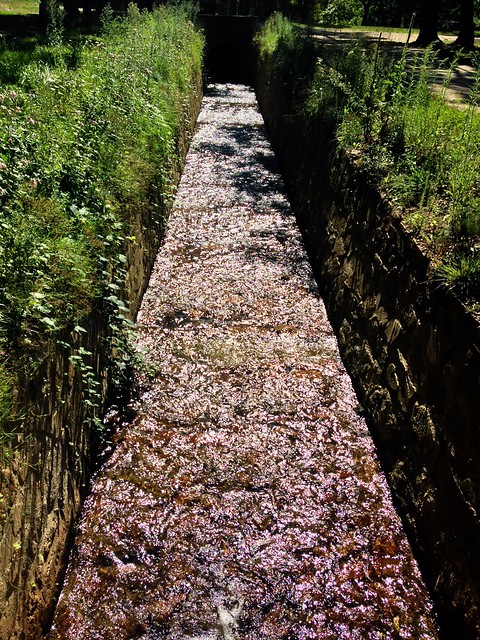 We passed the large dam at the far end of the reservoir and turned inland to our campground, which was full of RVs but mostly empty, since it was out of the main season and a Wednesday evening as well. We drank a light rosé with holiday sandals on the label from the amusing-sounding appellation of "Côtes de Thongue", accompanied by bread and cheese and sausage and had an early night.