The first few kilometres of our hike had been on the easy, flat, shaded road alongside the Canal du Midi. But now we were heading up into the hills.

This part of the country seemed to be devoted almost entirely to growing sunflowers - the fields stretched into the distance on both sides of the road. Earlier in the season the endless bright yellow flowers must have been a spectacular sight, but we had clearly arrived after the harvest, and all of the sunflowers were dried and wilted. Still, the colours and shapes were quite striking, if a little depressing. 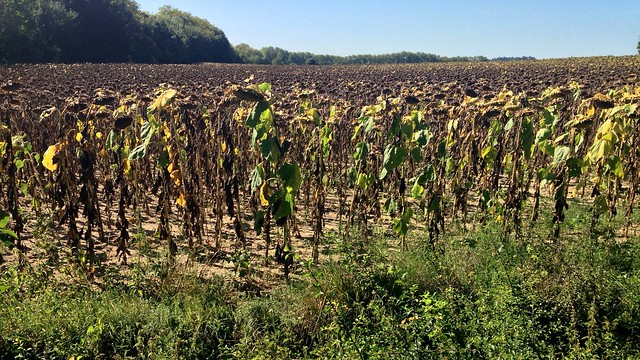 Wikipedia notes that there was a battle in September 1211 during the Albigensian crusade that took place on the very fields we were walking through.

Soon we found ourselves in the village of Saint-Martin Lalande. This was the first of many hill villages we would see on this trip, and, especially after several days in Venice, the word that I kept wanting to use to describe them was "pristine". The buildings might be centuries old and crammed together, but they somehow also seem perfectly prim and proper, especially in the clear bright sunlight. 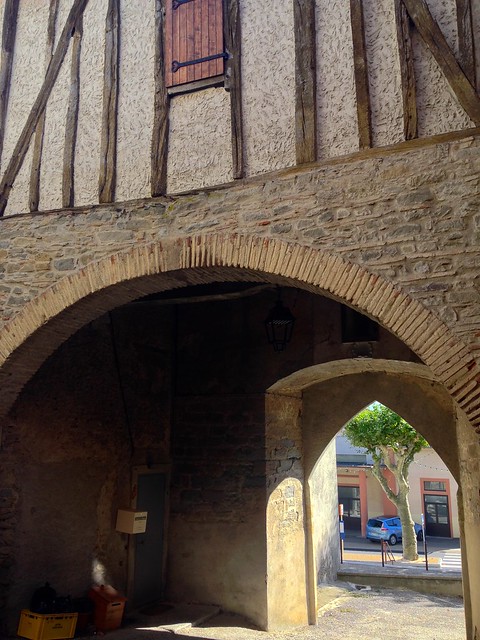 In the heart of the village was a small and rugged-looking 14th-century church. 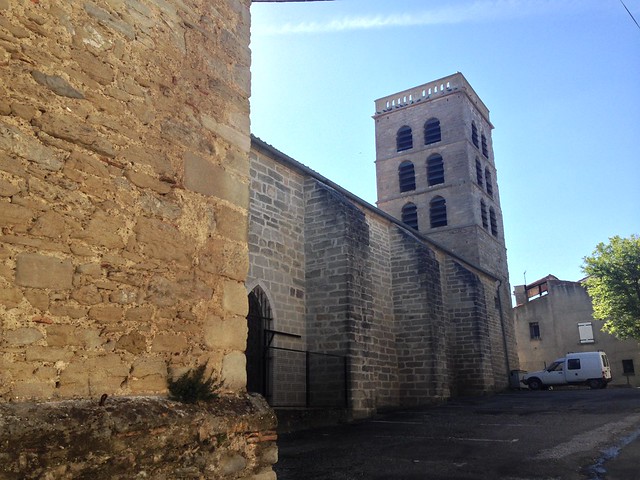 We rested in a nearby courtyard and took turns going inside the church. Having seen so many grand and famous cathedrals in 19th century Gothic Revival style, it was interesting to see a genuine small-town medieval Gothic church. 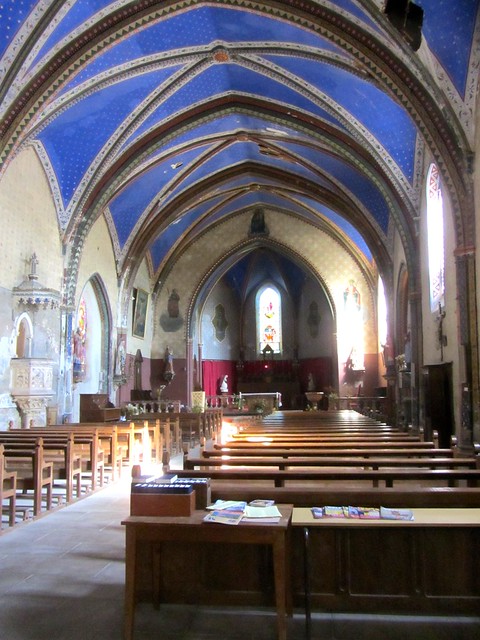 What was most notable was the use of colour inside: the arched ceiling was painted a vivid blue, and wallpaper-style patterned frescoes were on every wall. I gather that most medieval churches were not, as commonly thought, cold grey stone, but instead were brightly painted and finely detailed.

Not being a grand central cathedral, this church clearly doesn't have enough budget for proper upkeep. The plaster on the walls is starting to wear out, the murals are fading, and a closer look past the blue paint showed the ceiling was in particularly rough shape in spots. 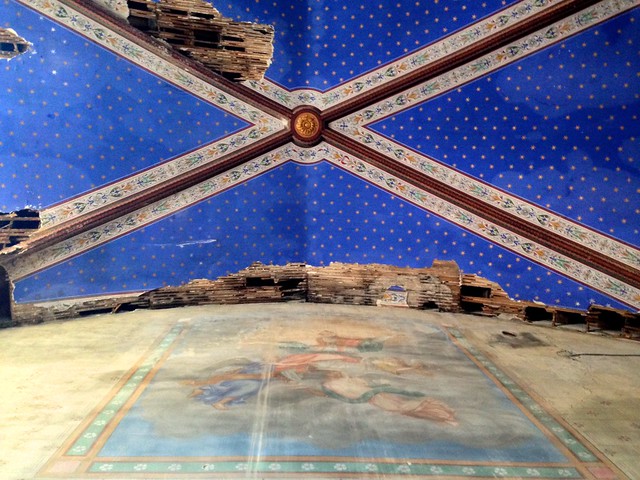 We also saw our first statue of Saint Joan of Arc - it isn't exactly a surprise to see that she is very popular in France. Most of the statues we saw in other churches and cathedrals looked quite a bit like this, with her in full battle armour, carrying a banner, and with her helmet at her feet - ready to thoroughly smite the English. 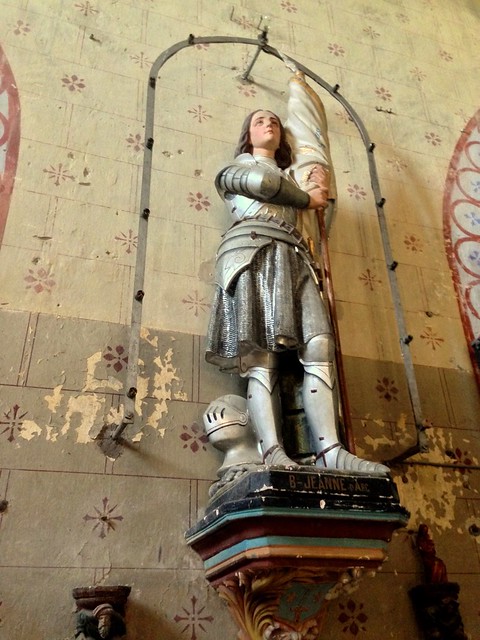 We loaded up again and continued our hike out of town and uphill. Looking back, we had already gained enough altitude to get a better view of the Pyrenees in the distance, including some dramatically rocky cliffs. 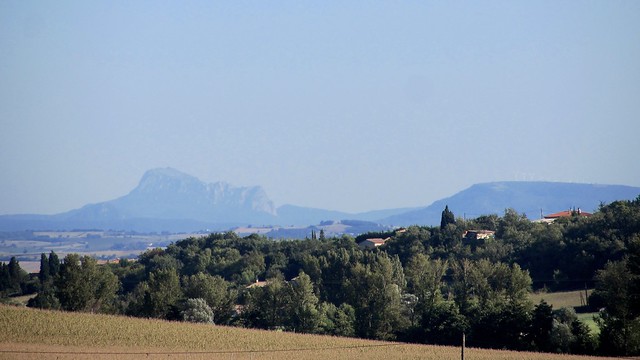 Just a bit further out of town and we made it to our first campground: Domaine de la Capelle. We had cleverly timed our trip for very early September, when all of the campgrounds and hotels and tourist spots were still open but all the children had gone back to school. This meant that we usually had plenty of choice for camping spots, and the neighbours, mostly retirees in RVs and the occasional cranky German on a mountain bike, were quiet and respectful. 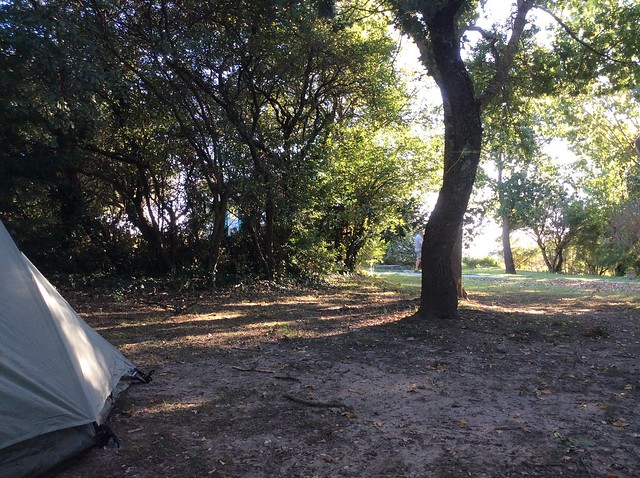 This turned out to be pretty typical of most campgrounds we encountered in France: the bathrooms were immaculate and shiny, but for some reason didn't have toilet seats. You had to perch in your best horse stance or brave the cold cold ceramic. The owner/manager was straight out of Gallic Central Casting, Languedoc Division: long face, darkly tanned, and making up for occasional absent-mindedness with overflowing good-humoured enthusiasm. He spent most of his time in a little "Acceuil" booth, but when we asked about buying a bottle of wine, he rushed out onto a nearby electric golf cart and rolled off to the nearby farm buildings to get some from the cellars.

Yes, every campground we went to in France sold wine at the main office. Usually local, mostly very reasonably priced - and very drinkable. They also asked us what we wanted in terms of bread and/or croissants for breakfast the next morning, since they wanted to ensure they got the right things fresh from the bakery. We always got a regular croissant and a pain au chocolat to split, and then two baguettes, which we broke up and put into ziplock bags for occasional snacking during our day's hike.

So: no toilet seats, but good wine and still-warm-from-the-bakery bread and croissants in the morning. That's a trade-off I can probably learn to live with.

But breakfast was still in the future. We had set up our tent, we had our camping seats set up, we had wine and some food we had picked up at the grocery store in Castelnaudary, and we had some time before the sun went down. We sat and rested and read some (e)books for a while.

Our campsite was near yet another field of dead sunflowers, but this one had a grand view down into the valley below and the mountains beyond. As the sun descended, everything turned golden. 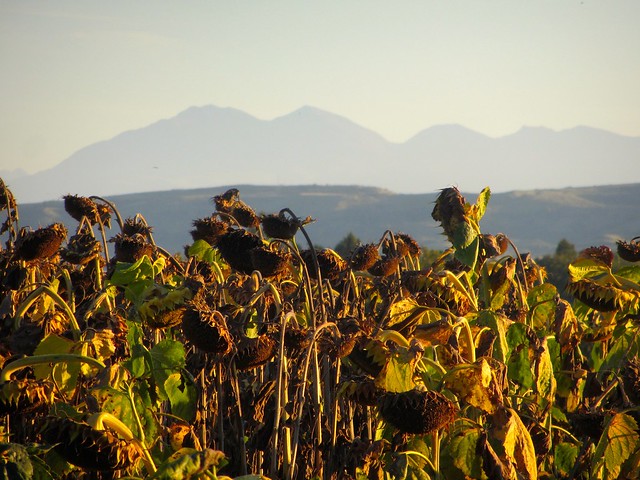 Soon the moon came out, perfecting the dusk view. 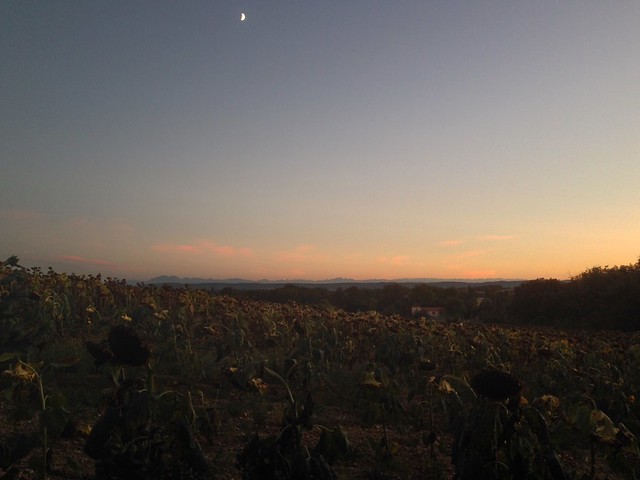