We had had several amazing days in Venice, but it was time to move on to the second part of our trip: hiking in south-western France's Languedoc region. We packed up our stuff and we were soon ready to go. I had to leave my jaunty straw hat behind - the dorkier-looking hiking hat would have to do while we're in France. 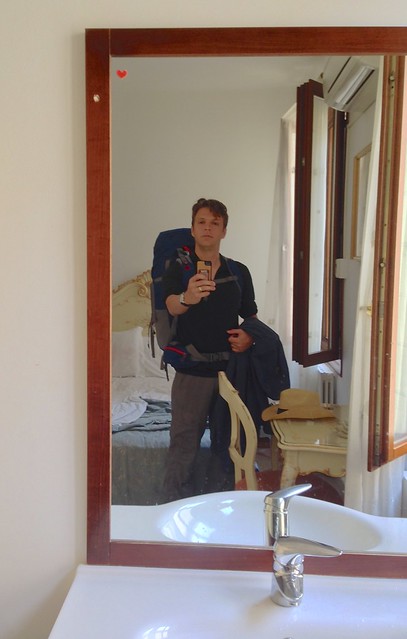 The flight wasn't until the late afternoon, so we still had a few hours to do some last things in Venice. We checked our bags at the hotel's front desk and went for coffee in a nearby square. On the way out, we noticed that the little wine bar down the street which we had passed many times but had never actually been to was already open - so even though it was only a bit after eleven in the morning, we decided to go in for a 'second breakfast' and a drink. Yes, a drink - Venetians seem to have no trouble drinking before noon, especially since it was a Sunday, so we figured we'd do it too, and settled in with some Campari. 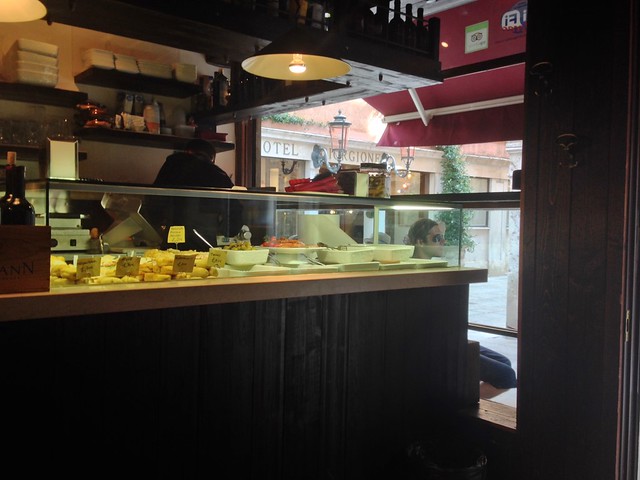 If you're ever in Venice and want to try a nice place popular with locals, you could do a lot worse than El Sbarlefo. It has posters and books about jazz, a nice selection of sandwiches, cheeses, and charcuterie, and plenty of drinks. It's clearly geared towards locals more than tourists (although I'm sure it doesn't hurt business that it's surrounded by hotels). I got a chance to really watch the local Venetian guys - even the young toughs in track suits wear perfectly sized and immaculate track suits in the latest fashions with effortless casual grace.

We then decided to wander around a bit. We headed northwest into a more residential area, where we had lunch on a loud quayside patio. 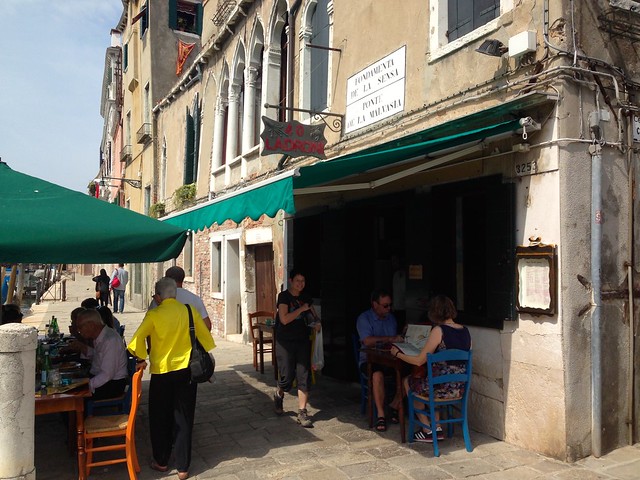 We went to the old Jewish Ghetto (as I described in an earlier post), and then headed back downtown along the Strada Nuova, crowded with tourists and buskers. 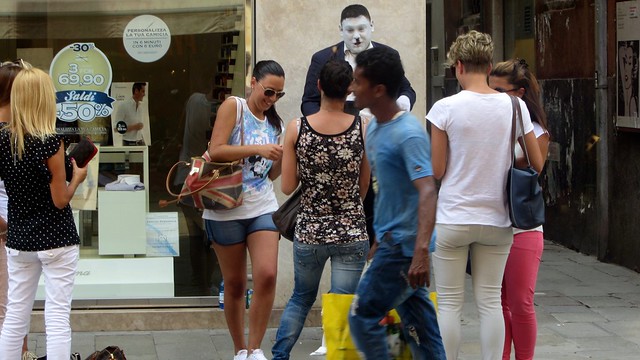 We got our bags, took one last look down the pretty street we had spent so much time on, and headed towards the vaporetto and then the airport. 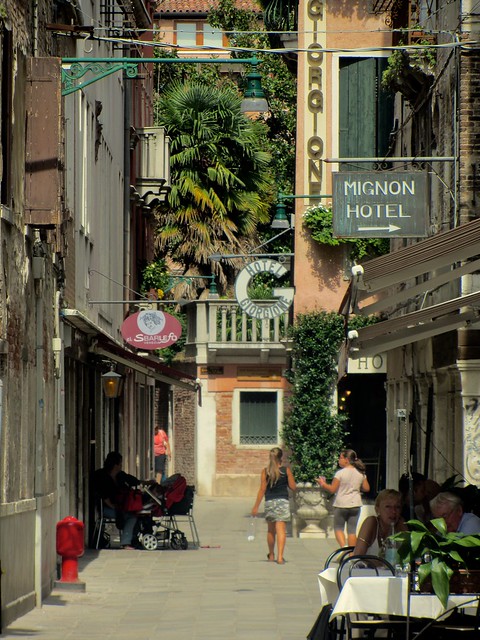 On our way northwards to the docks, we saw a bride and groom walking along the piazzas, presumably looking for romantic photo opportunities. 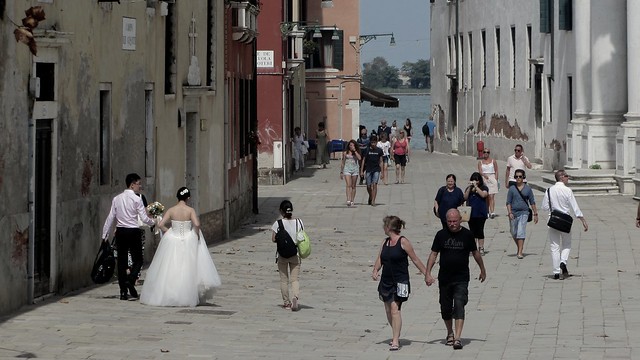 We piled onto a vaporetto and headed to the airport. We said goodbye to old Venice. I could see dockyards and refineries in the distance, reminding me a bit of Halifax and Dartmouth. 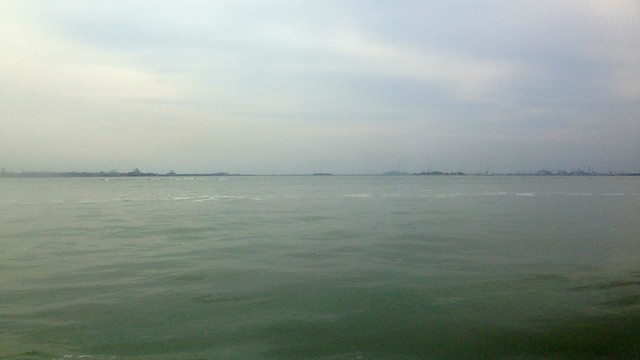 We got to the airport and, since it was the last Sunday of the summer, the place was jam-packed. Venice's Marco Polo airport services one of the most popular tourist destinations in the world, yet it seems to be about the same size as Halifax's Stanfield airport. The lineups were huge and (since this was Italy, after all) chaotic.

We eventually got through to our standing-room-only gate. Hanging above it was a vintage WWI biplane: 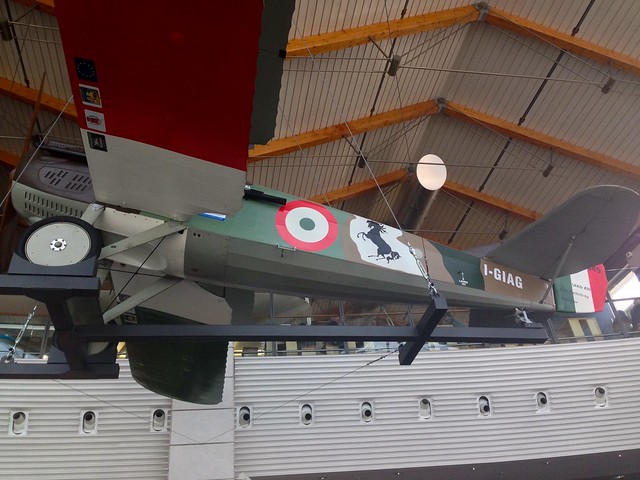 This belonged to Italian ace Francesco Baracca. Baracca had originally been in a cavalry regiment so he had a horse emblem painted on the side of his plane. This emblem was later adopted by the Ferrari motor company. So this was the original of the iconic cavallino rampante which has featured on so many elite sports cars.

We finally got the call to board our flight. We all piled onto a bus which took us to a back corner of the tarmac to our Air France Airbus 320. It's always fun to board a plane the old fashioned way via stairs - you get a real sense of the size of the thing. Our seats were near the back so we got to climb up the back stairs, which had a great view of the gigantic tail of the plane. 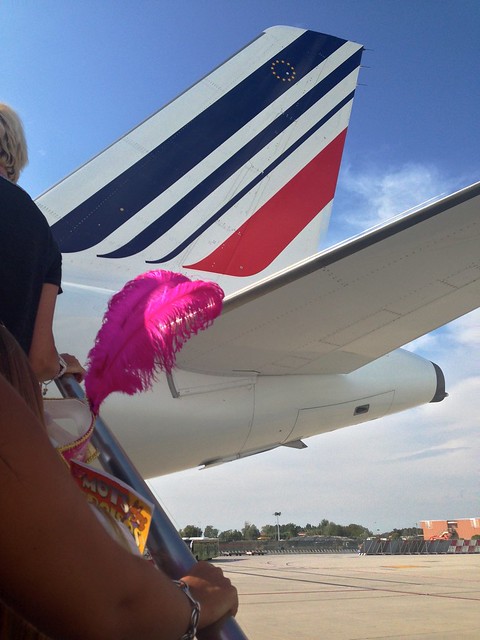 This was a short-haul European flight, lasting only about two hours. There was only one class of seats in the entire plane, and they were small and rather closely packed - it really put the 'bus' in Airbus. But since it wasn't that long a flight, I couldn't really complain. I didn't get a window seat, unfortunately, but I was able to watch a bit of the French cop movie my neighbour had playing on his Sony tablet. I couldn't tell, though, if it was a comedy or a thriller.

We were on our way to Toulouse and to the second, more adventurous part of our trip.