We had seen the Scrovegni Chapel, bought some fashionable clothes, eaten a patio lunch of prosciutto and white wine, and had experienced the Palace of Reason. We had several hours left in Padua before our train and had no firm plans. So we decided to walk around town a bit and maybe find a place to consider for dinner.

We had entered the Palace of Reason by a side door, but we took the front door out. It led to a nice terrace area and a set of stairs: 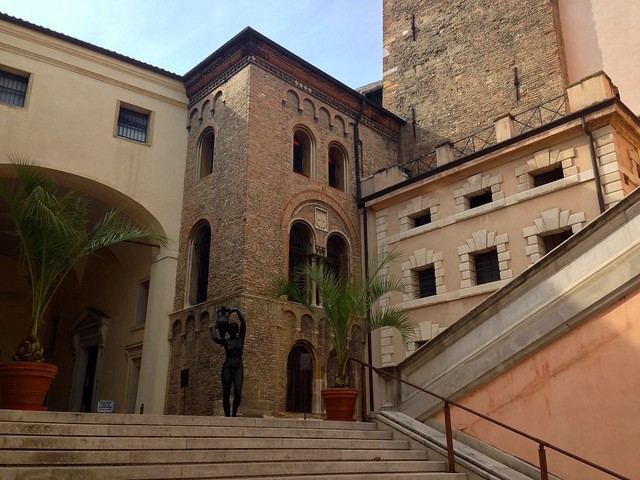 The stairs led to a courtyard which led to a busy square full of students. Padua has been a University town for eight centuries and is currently home to about 65,000 students. We had found ourselves in the university district.

A nearby building caught my eye, with its mixture of architectural styles: 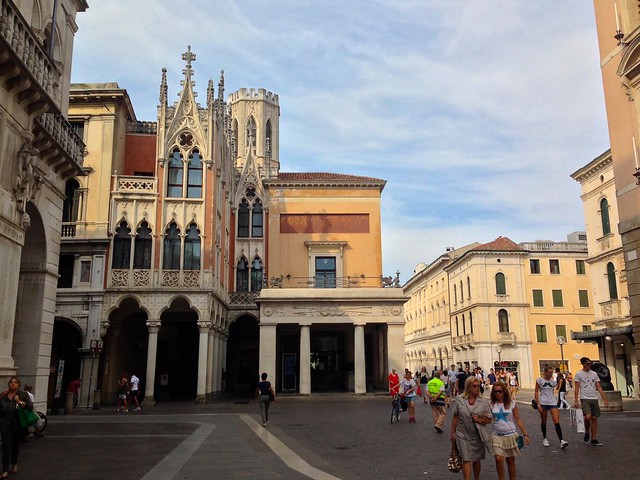 I discovered later on that this was quite a famous place: Cafe Pedrocchi, founded in the 18th century, frequented by Stendhal and Lord Byron, and one of the centres of Europe's year of revolutions, 1848. If I had known, I would have gone in and had a coffee. Instead I took a picture and then crossed to the school building across the square.

This was an old academic building, and the walls and ceilings were covered with plaques representing classes and towns of origin, like a stone yearbook: 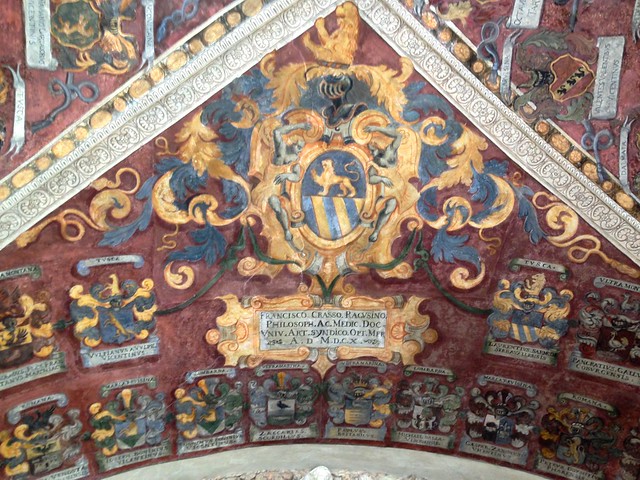 We then passed into a small square with a set of tombs in it, supposedly of the ancient Trojan Antenor, who is said to have founded Padua after the Trojan War, and of a more recent poet. I particularly liked the small bushes growing out of the roof tiles. 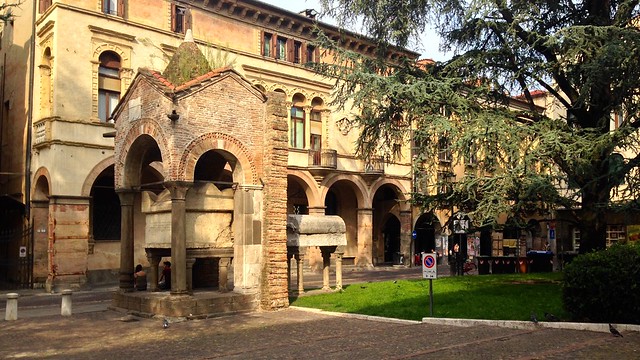 Across from it was a lovely building with Venetian-gothic detailing and two plaques, one stating that Dante hid out there from a vendetta for a while, and the other noting that this building was an early victim of aerial bombardment (by Austrians in 1916). 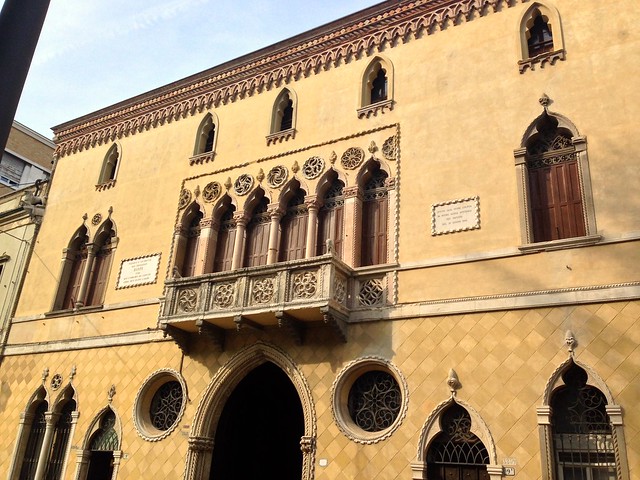 We then wandered through the narrow streets of old Padua. Almost all of the sidewalks in this part of town are covered with colonnades, protecting pedestrians from the sun but also making the whole area feel like one large cloister. 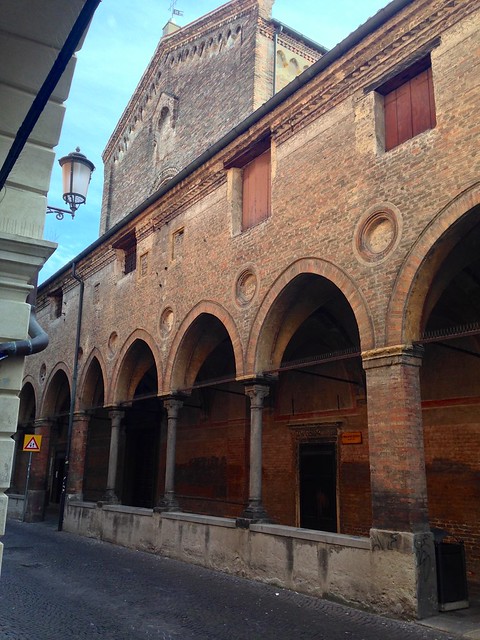 We passed many cafes and antique bookshops, but our attention was grabbed by a lovely little neoclassical church across the street. 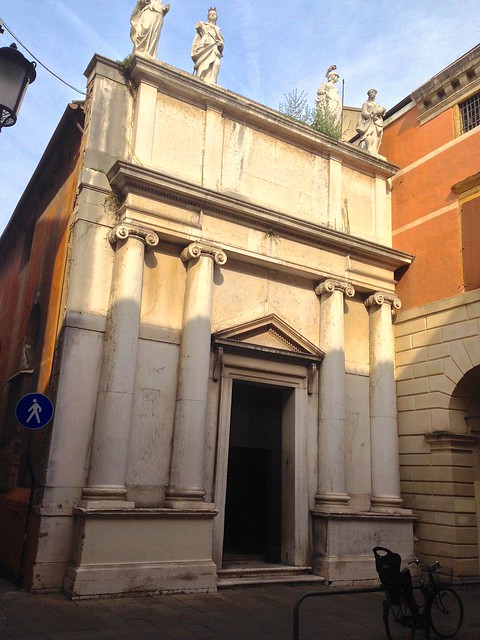 The church turned out to be open to visitors, and it was equally lovely inside. It was the Church of Santa Margherita (Italian Wikipedia, but it's pretty legible if you run it through Google Translate). The interior was cozy but lush with marble and columns and included statues of the four apostles and a painting of the Flight Into Egypt which, unlike so many of the allegorical figures we'd been seeing on this trip, felt like an intimate view of a real family.

We were pleased to have seen inside a church on our ramble through Padua, even if it was a small one. Then we turned a corner and discovered a much different kind of church: 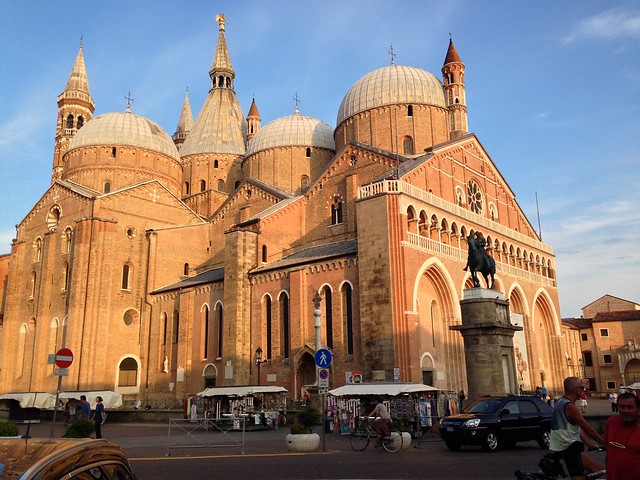 The Pontifical Basilica of Saint Anthony in Padua is the final resting place of the famous Franciscan friar and patron saint of seekers for lost items, and is thus a major pilgrimage destination. It is a vast complex done in a variety of architectural styles. As we neared the entrance, we saw many groups of excited visitors, including a number of Franciscan monks - I haven't seen many real live monks before. It was odd to see them in their medieval-style robes but with Birkenstocks and wearing modern backpacks. 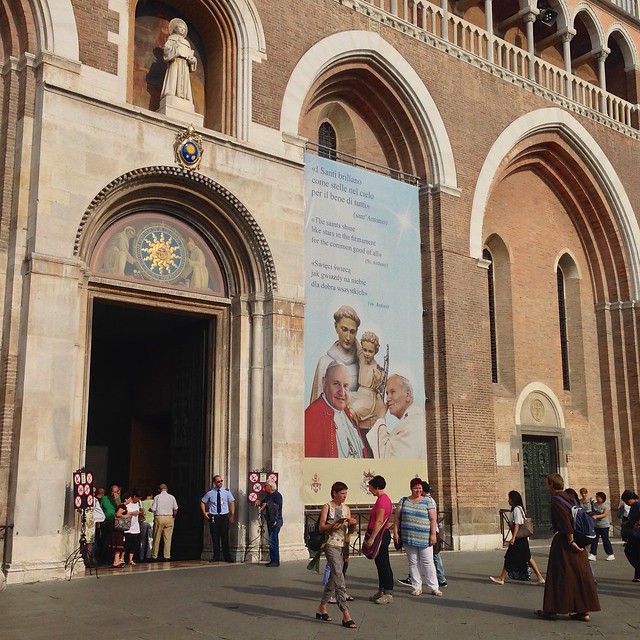 Photography was forbidden inside the basilica, so I have no pictures to share of the vast interior. There are numerous side chapels, memorials, and statues, all under a ceiling painted to seem like an enveloping sky. A lot of the art was from an aesthetic tradition that really liked skeletons - not just fearsome "memento mori"s, but whimsically macabre ones wearing toothache headwraps or flying through the air.

The highlight of the basilica's interior would have to be the chapel in which rests Saint Anthony himself. Unlike the relative darkness of the rest of the building, this chapel is made out of beautiful white marble. There was a long lineup of pilgrims waiting to pay their respects, so I didn't get too close a look.

After a full circuit of the inside, we decided it was time to recuperate on a patio, and we found a nice one nearby with a great view of the basilica shining in the late afternoon sun. We drank rosé and appreciated the eclectic architecture. The basilica has Gothic-style rose windows, but Romanesque heavy brickwork and rounded arches: 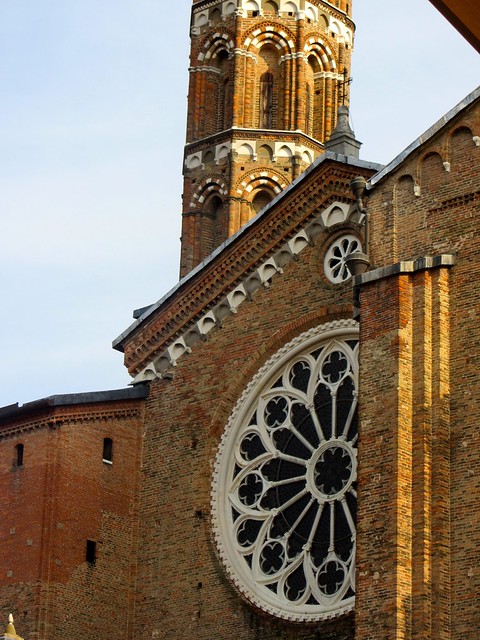 The domes and towers reminded me a bit of Hagia Sophia, especially with the Ottoman-retrofitted minarets. The popular style here in Northern Italy puts the domes on top of cylinders, which gives more height inside but also makes their cathedrals look a bit like grain silos. 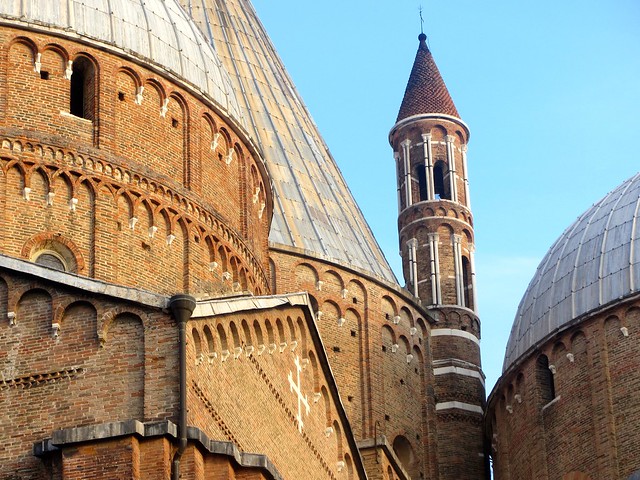 The top windows on one of the towers looks particularly Arabian: 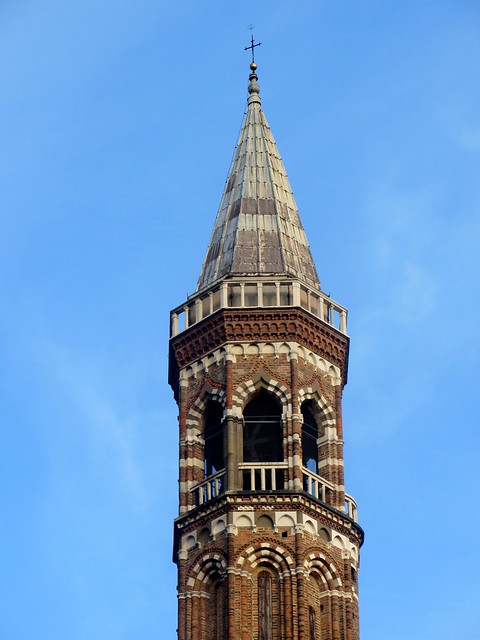 As we contemplated the architecture, a group of young men came by, one of whom was inside a portable booth with a blow-up novelty doll. They all had matching red shirts saying Vodafone, but the booth had a big sign on top saying "VODKAPHONE" instead. It was a stag party. They stopped and chatted with a table full of Swiss tourists, and poured out vodka shots for everyone to a round of congratulatory applause. 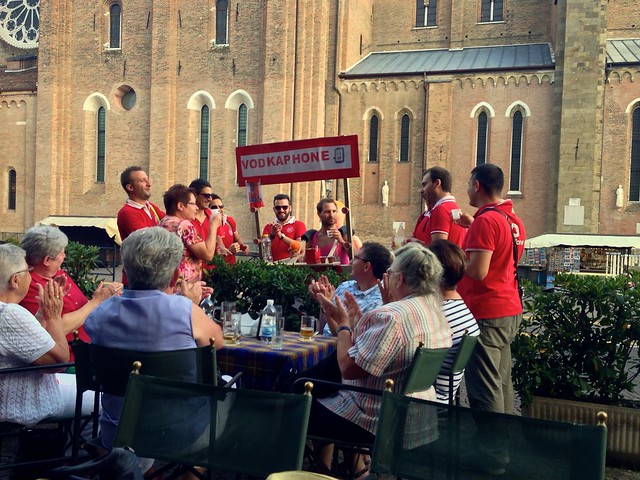 As they wandered off, a police car drove by and the officer chatted with the guys a bit. I didn't hear the conversation, but presumably they explained that they were just wandering the streets with a sex doll and handing out free vodka shots to random people on patios - since with a nod and a shrug the police car drove off. I tried imagining how many laws these guys would be breaking if they tried the same thing on Argyle street in Halifax.

We decided to look for a place for supper. As we headed southwards, we passed a grand equestrian statue. 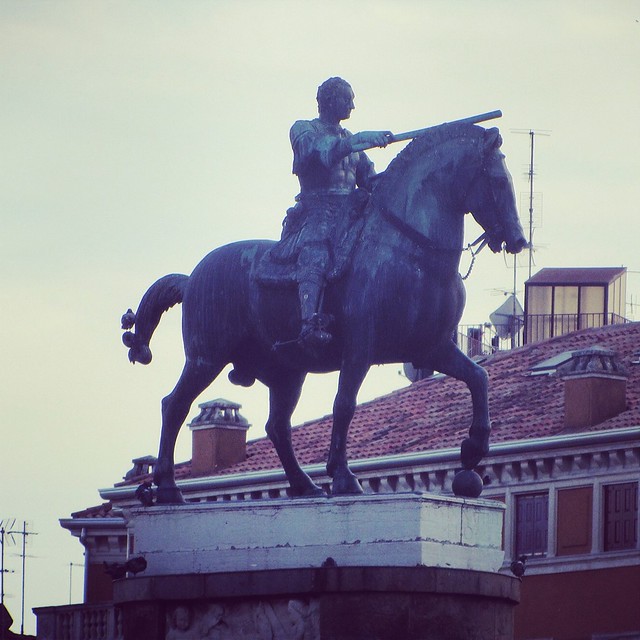 Turns out it's by Donatello! More Wikipedia research reveals that Donatello also did a number of works inside the basilica as well.

We headed southwards as the sun set, towards a large circular park we couldn't help noticing on our maps. This was the Prato della Valle. Market day was wrapping up and it was full of trucks loading up unsold merchandise. We walked a circuit around the outside of the park, looking for nice restaurants. The buildings were interesting - I especially liked the new apartment building that had a fun postmodern take on the much older buildings so common in this part of the world: 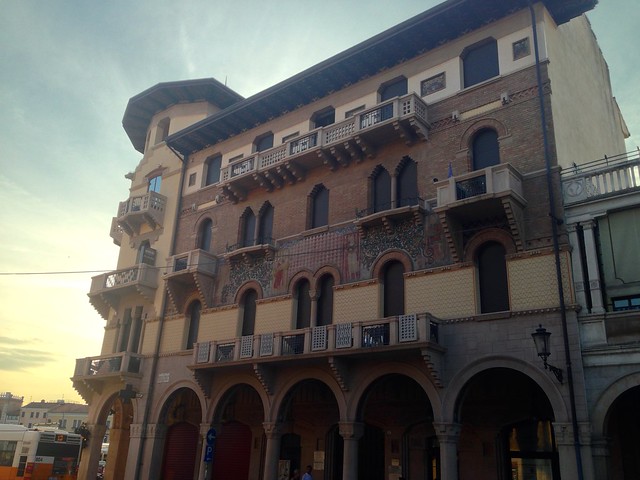 We also passed by the massive Basilica of Saint Justina, the front of which, even under construction scaffolding, somehow scared me. The sheer scale of the giant front wall of weathered brick was overwhelming. 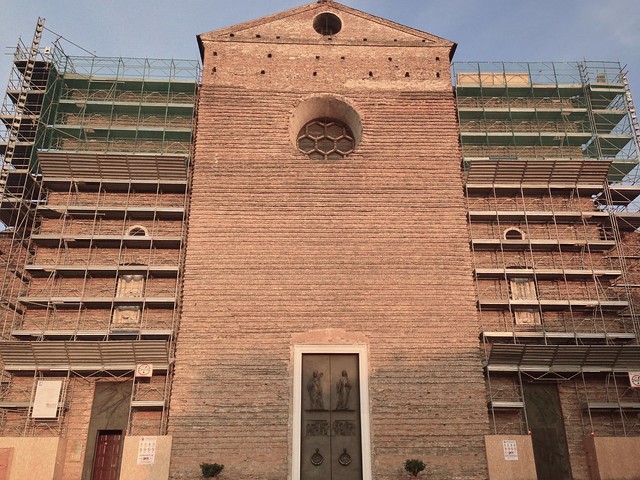 (It's very hard to give a sense of scale in a photo - but note that the figures on the huge main door are slightly larger than life, while the door on the left is closer to more normal size.)

As we finished our circuit, we saw Saint Anthony's shining at the end of the street in the sunset: 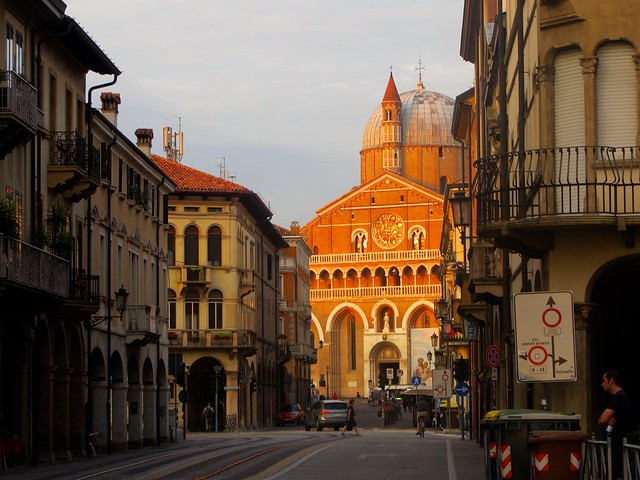 It was a Saturday night, and in Italy that meant that most restaurants weren't even open until after 7 or 7:30. Our favourite option wasn't open when we first passed by, but after we had done our circuit it was already serving a handful of early-bird tourists like ourselves.

The restaurant was Ristorante Al Bersagliere, a cozy family-run place with a nice covered patio, a half-block away from the bustle of the main streets. I had more prosciutto and a very tasty rustic pork dish. And wine, of course. 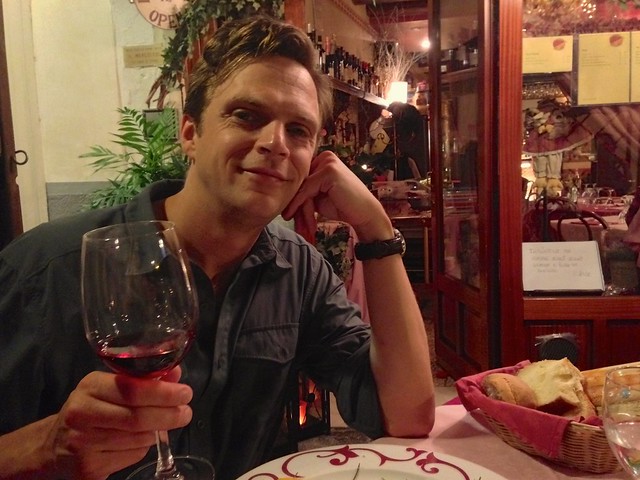 We headed back through the evening streets, full of Saturday night student revellers, towards the train station. We passed Saint Anthony's again, this time shining in the night: 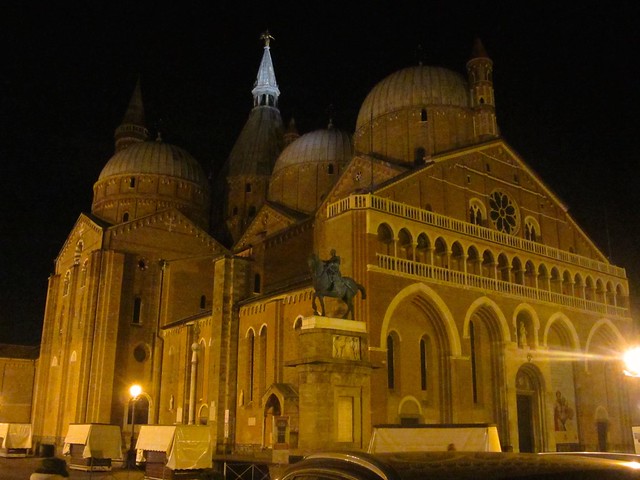 We passed a grand entrance with heads on the capitals - the one on the left looking surprisingly like Rob Ford: 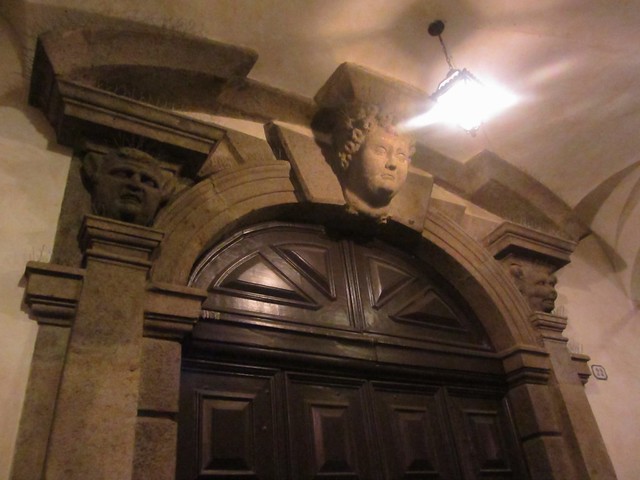 We got to the train station with a few minutes to spare, which I spent admiring the very futuristic-looking, Chris Foss-style trains: 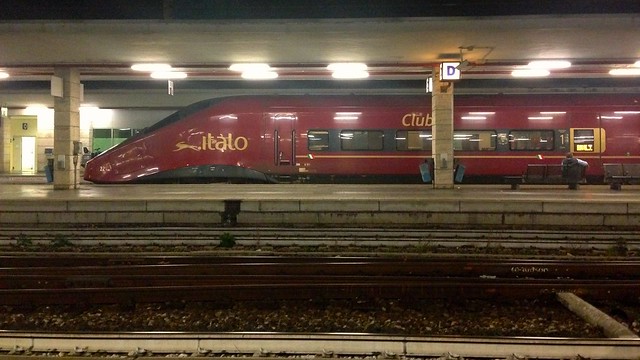 We got back to Venice and went to bed. Tomorrow was going to be a big day - we were flying to Toulouse to start the next chapter in our trip.