When I started going through my pictures of the flight to Flaxman Island, I became a little obsessed with figuring out exactly where they were taken. I wanted to geotag the images properly so I could have a better record of the trip. 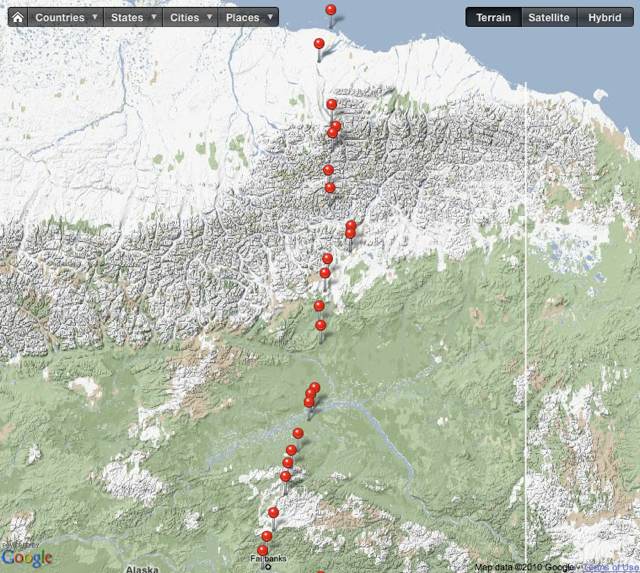 My great-grandfather had spent years mapping out this part of the world with late-Victorian brass instruments - the least I could do was spend a few hours sitting at a computer with Google Maps/Google Earth to figure out some of the same locations. I'm sure my great-grandfather would have loved Google Earth if it had existed in his lifetime.

Alaska becomes pure wilderness just a few miles north of Fairbanks - and it's much harder to figure out where you are without man-made landmarks like roads and buildings. I managed to eventually note when we had crossed rivers and figured out from the photo timestamps how long we had travelled between the crossings to get an estimate of how fast we were going. This was easy enough to do with a normal overhead map, like the ones in Flickr or iPhoto. Once we got into the mountains, though, it was a different story.

The problem with the mountains is that there seem to be several passes through the Brooks Range, and it took me a while to work out which one we actually took. To figure this out, I zoomed to altitudes of only a few hundred feet and tried to recreate the shapes of the mountains from my photographs. The satellite images and topographic information in Google Earth for this part of the world aren't very detailed, so a lot of the time I wasn't able to find a very good match (or I found multiple matches). I was still able to anchor the position in a few key places and then extrapolated from those.

The similarity between the real images and the Google Earth versions was sometimes quite striking:

Further north, as we got to the delta of the Canning River, it was almost impossible to figure out our location from matching shapes, since the shallow mud islands change shape all the time, depending on the weather, the water level, and a hundred other details. I eventually took to measuring out a known distance (assuming a steady flight speed) on a piece of paper and holding it up against my computer screen.

I was very heartened to hear back from Kirk, our pilot, who kindly marked out where we landed on Flaxman, as well as the location for his small landing strip by the river.

I was also proud to update the Wikipedia entry for Flaxman Island and provide the correct location for my great grandfather's camp.

This Google Earth Places List has all of the picture coordinates that I tracked through the Brooks Range and northwards to Flaxman Island. You can also track many of these locations in the map for the Flickr set.