This is part 6 of a series of blog posts describing my trip from Fairbanks Alaska to my great-grandfather's research cabin on Flaxman Island.

We passed through the last of the Brooks Range and stopped off again in Arctic Village to refuel - and had another great sharp-angled landing.

Crossing back over the Yukon Flats we saw another herd of caribou, and Kirk even flew lower so we could get a closer look. The sun was out at this point and the neon yellow of the ground cover was even more evident. All I could think of all along this part was "great desktop image!" As we flew through patches of rain, I even saw a double rainbow. I wanted to shout out "Double Rainbow All The Way!" but I figured nobody else in the plane would have understood what I was talking about. We passed by a forest fire. Supposedly out here they don't usually bother trying to put them out if they're not endangering anybody's property - they're just part of the natural process. We even saw a solitary caribou (it might have been a moose - it's hard to tell) in one of the lakes. We eventually returned to the Fairbanks area. Just north of town we passed over the Alaska pipeline - with a good view of how it crosses the rivers, by going under them, with lots of space to spare, reducing the risk of getting oil in the rivers. 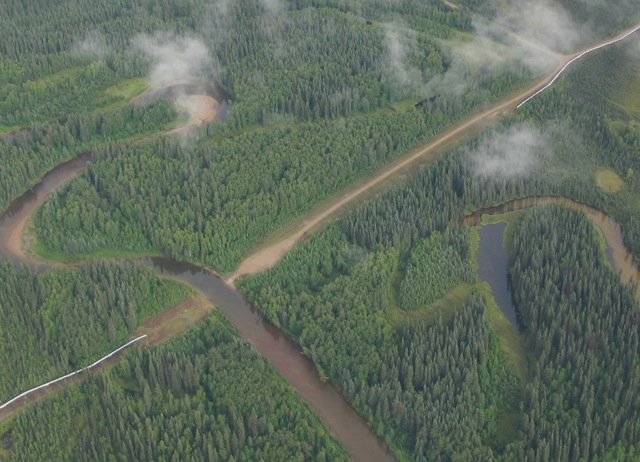 Soon we saw roads and buildings, and then the Fairbanks airport in the distance - and then we were on the ground. In the same amount of time as a regular business day, I had seen a lifetime worth of spectacular scenery and stood on the same island as my great-grandfather had a century ago.

I had one last treat, though: just over from our Cessna's parking spot was a classic vintage T-28 Trojan. We went back to the hotel and I went straight to bed. What a day this had been, a spectacular finish to a month of extraordinary sights.