I first really heard of Donairs when I saw a bus shelter poster in Toronto from Nova Scotia tourism that simply had an arrow pointing east and the single world: "Donair"

When I moved to Nova Scotia, one of the first things I did (after going to Peggys Cove, of course) was find a place that served these donair things and see what they were like. Halifax donairs are similar to shawarma or falafel, part of that universal 'put meat into a starchy container' food idea: strips of heavily marinated beef shaved off of a large basting cylinder and put on a small thick pita along with diced tomato and onion and a sweet garlic sauce, usually wrapped up in aluminum foil. They're messy to eat, but quite tasty in that "I'm happy now but I'll probably feel queasy for the next few hours" way, and I get the feeling (although I can't really speak from experience) that they're best at 3am after six or so beers. The marinated meat and sweet sauce are often used in other dishes around Halifax, such as Donair Pizza or the fearsome-sounding "Donairzerotti". 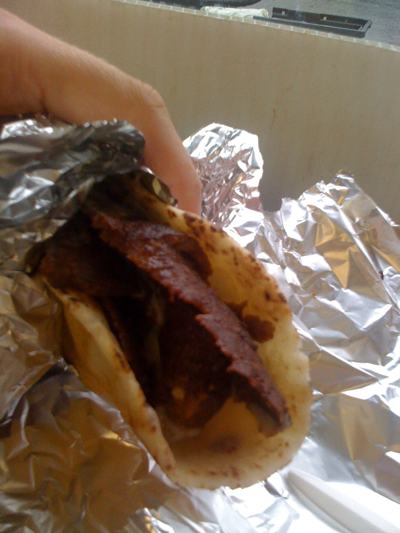 This donair came from King of Donair, in Halifax's famous Pizza Corner downtown. King of Donair makes a big deal about being the place that first introduced donair to Halifax back in 1973 or so. I've always wondered how this variant of a Mediterranean dish ended up in a mostly British/Celtic/Acadian town, so I looked it up one day on Wikipedia. Turns out donair is descended from the Greek Gyro and the Turkish Döner Kebap, is a close relative to the Shawarma, and has a major variant in Berlin - so when I found out I was going to these two places one after the other, I just had to trace the lineage.

Some people travel to experience each culture's fine cuisine, and then write about it (warning: that link might blow your mind) - I like to trace the migrations and cross-culture influences of short-order snack food.

In Turkey, we played it safe and didn't have any of the tempting food from the street vendors, so I didn't try the street version of döner, but it was on the menu at some of the restaurants we went to: You can see all of the same elements are there, but just rearranged. Also, every single ingredient here was far superior to what you can get on Quinpool at 3am: the meat was of much higher quality, the sauce was more subtly-flavoured, and we had watched the flatbread being made minutes before by a serene-looking woman on a raised platform near our table.

By the way, if you're going to eat in the touristy area just down from Topkapi and Hagia Sophia, our favourite was a place called 'Home Made' - it seems to be a family business, they don't harangue tourists on the street as much as some of their neighbours, and the food is quite tasty. (The restaurant options are better on the other side of the Golden Horn in Galata, though).

In Berlin, fairly late at night after a long day, I managed to grab this at a stand near the Leopoldplatz: This was a bit more like the Halifax donair - especially in that "wow, I don't believe I ate the whole thing" feeling afterwards. There was a wider variety of stuff in it, including chopped cabbage. There were various sauce options and I had the garlic sauce, to get the most similar experience. Instead of a pita, it's in a sort of split bread with a bit more texture and thickness. I had asked for a separate order of fries, but there was a bit of a misunderstanding and the guy put the fries directly into the donair. I thought I had accidentally discovered a new meal sensation - but it turns out that this is actually a fairly common option in Berlin. They should try this out in Halifax too.

In fact, imagine the possibilities for Canadian national unity (not to mention all the extra angioplasty) of mixing the two great Canadian snacks: donair and poutine! Supposedly some places already serve poutine with donair meat and sauce on top - but I think putting the poutine inside the donair could be a whole new thing.