The Berliner Ensemble was founded in East Berlin after World War II by revolutionary playwright and dramaturge Bertolt Brecht, and their tours in the 1950s and 1960s had a profound effect on theatre worldwide. They are now one of the top theatre troupes in the world.

When we were first planning to go to Berlin, seeing one of their shows was the top of our list of things to do - but it looked like they were taking the summer off. When we got there, we discovered that we were very wrong: they had a full slate of repertory performances, different ones almost every night. So we went a bit crazy: I saw three of their shows, and my partner saw four.

It was some of the best theatre I've ever seen in my life. The actors are top-notch and the productions are very smart and visually spectacular. Often when I see a show I catch myself thinking things like "Well, they did fairly well, considering their limitations" - there was none of that with the Berliner Ensemble: this was excellence without compromise on all fronts. I don't know much German - I was able to recognize on average about two words per scene - but I was entirely riveted by the performances, the directing choices, and the production design.

The Berliner Ensemble work out of the Theater am Schiffbauerdamm, right downtown in the Mitte district on the Spree river. For a company with a socialist, modernist history that tends towards minimalist stage design, the theatre seems jarringly baroque - why have a mere column, when it can be a Caryatid or Atlantid? Before the first show started, I felt like I had gone back in time to the 18th century: the theatre isn't air conditioned, so it felt appropriately stuffy. There was also a large school group attending on that first night, and even though they're modern smartphone-generation kids, the effect was just like what I imagine many baroque theatres must have been like: overdressed cleavage-heavy 20-year-olds ignoring the show in favour of gossip and who-is-sitting-with-who and what-are-they-wearing, grandstanding young bucks scoffing at everything to get attention, and a constant low murmur occasionally erupting into ill-timed and inappropriate laughter.

I quickly forgot most of this once the show started.

The first show we saw was "Frühlings Erwachen" or "Spring Awakening: A Children's Tragedy". This is not the what-the-hell-were-they-thinking rock musical, but the original Frank Wedekind play from 1890 or so. It's about a group of teenagers in 19th century small-town Germany wrestling with sexuality in a conservative bourgeois culture that refuses to discuss sex at all. As my partner said, "this is the reason why Sigmund Freud got so much work."

The production design is minimal but highly effective: the only pieces of 'set' for most of the show are four large rotating panels at the back, but with creative lighting and blocking, these manage to evoke houses, doors, trees, and schoolrooms. As the play progresses, the stark white floor is gradually littered with ashes, papers, and bits of wood - a symbol of the accumulating debris of the main characters' lives.

The school group was of course a nuisance during this show - but it was entirely appropriate as well. The play is a searingly honest look at adolescence, and it's good to have it being reacted to by a room of adolescents. The disturbing confused rape scene was greeted by a wall of laughter - very upsetting, but a genuine nervous reaction and entirely appropriate for a play about teenagers who have no idea about what's going on and what they're doing.

The show started as fairly naturalistic, but bits of surreality started sneaking in. The actors who played the parents were much shorter than those who played the young men, and the adult authorities were grotesque clowns, clomping around the stage on concrete blocks. At the end, after childhood innocence was destroyed by rape, abortion, and suicide, the back panels dramatically collapsed backward, creating a nightmare graveyard for the surreal Maybe-God-versus-maybe-the-devil end sequence. 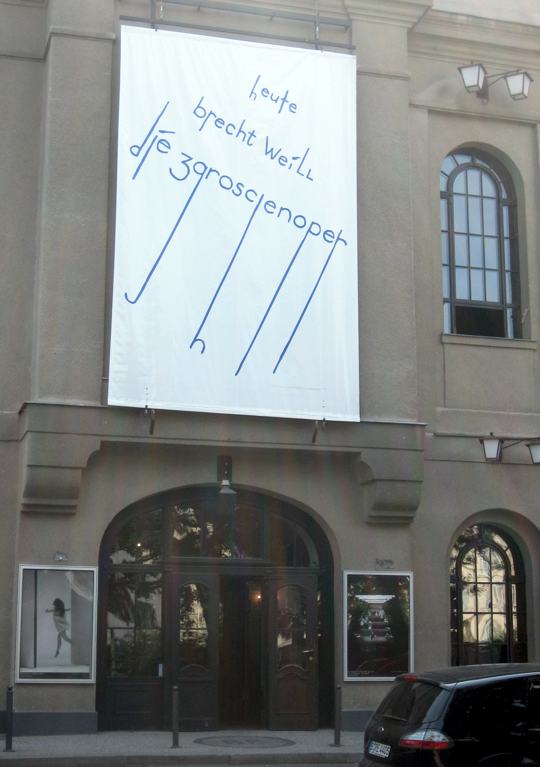 The original 1929 production of Brecht's The Threepenny Opera was in fact at this same theatre. We really wanted to see this show - we almost didn't get tickets, but a few came available at the last minute (it's worth regularly checking the website!)

This isn't a re-enactment of the original production - it's a new version directed by Robert Wilson (not the psychedelic novelist - the other one).

The only other production of the Threepenny Opera I had seen was at the Stratford Festival a few years ago, and it was done in a fairly realistic manner - this production was completely different. Everybody was in white face paint and were various levels of grotesque. The costumes were all camp, drag, bondage, and leather. Every actor had their own particular look and movement vocabulary. The set was fairly abstract, but the context was filled out with a huge number of precisely timed sound cues of opening gates, pouring drinks, etc.

The white faces and the dark-but-flamboyant androgynous outfits reminded me a lot of Cabaret, which is of course based on Berlin's theatre world around the time of the original 1929 production. Also, Robert Wilson's style has been strongly influenced by Brecht. It's hard to tell which aspects of the production design are 'traditional' and which parts are new, and which way the influences have gone - was Cabaret's M.C inspired by Mack the Knife, or vice-versa, or did this production enhance the aspects of the original that had already been picked out in shows like Cabaret and in various alternative cultures? I wasn't able to find enough details online to come to any conclusions - but this article provides some clues.

Because the Berliner Ensemble is a true ensemble, many of the same actors who had performed in Spring Awakening were also in The Threepenny Opera - it was strange to see the young woman who played the sweet victim Wendla in Spring Awakening, wearing her little girl outfit throughout the play, become the shrewish Lucy in Threepenny Opera, in sexy black garters - all the more strange since the actress is a dead ringer for a young Helena Bonham-Carter.

Interesting sign of the times: when MacHeath said "Who is the bigger criminal, a man who robs a bank, or a man who founds a bank?" the room of fairly well-off, paid-for-an-expensive-theatre-ticket Germans erupted into applause.

TL;DR: The Berliner Ensemble's Threepenny Opera is one of the best stage shows I've ever seen, even though I didn't understand a word they said.

This mouthful is: "The Parasite, or The Art of Making Your Fortune" - an 18th century play by the great German playwright Friedrich Schiller, in the style of a French satire. I'm glad we had already seen the Berliner Ensemble in their more 'naturalist' mode, and had been eased into their surreality, because this production was Off The Hook. It's hard to describe, but here's a shot of the poster, giving some idea of what the show looked like: The stage was set up as a pyramid of open-top boxes. Actors would pop up in these boxes, wearing costumes with fake floppy legs dangling just below their chests - making them look like midget marionettes, but with real faces and arms. If the actors leaned forward, it would look like the characters were floating in mid air (you can see this clearly in the poster). About half of the cast consisted of a chorus of nerdy lookalikes who would come on frequently and annoy the other characters. The entire thing felt like a super-sized puppet show, complete with Punch-and-Judy cartoon violence and musical numbers.

In front of the stage was a box with a multi-instrumentalist, accompanying the action with electric piano and wacky sound effects.

The nutso visuals and the strong production design meant that not understanding the language wasn't any kind of barrier to getting a lot out of the show. I can safely say that I've never seen anything like this on stage before.

I didn't see this, but my partner did. It sounded like a great idea on paper: The Berliner Ensemble doing vignettes based on Shakespeare's Sonnets, directed by Robert Wilson, and with songs and incidental music by Rufus Wainwright. While it was supposedly visually interesting, she said that it wasn't quite up to the high level of the other productions we saw, and not quite as good as the sum of the talents going into it.

Several times we walked home from the theatre, just over 3 km up on Chaussestraße. On the first night, we looked for a nice place to have a beer, and accidentally discovered that The Brecht-Haus Museum has a nice back patio with good food and beer. There is no more appropriate place to have a drink before or after a Berliner Ensemble show.