An extra treat while we were in Berlin was the chance to be in a major city while its country's football team was winning in the World Cup.

In Toronto, you feel like you're living in the winning city every time they have the World Cup, because the odds are that the winning country has a neighbourhood of ex-pats somewhere in the GTA. It is more intense, though, to be in the actual country that is winning.

Berlin was really into the celebrations. Part of the Tiergarten was set aside as a "Fan Park" with carnival rides, beer gardens, giant TVs, and a lot of flying the black, red and gold. Every patio in the city had jury-rigged outdoor TV sets, attracting huge crowds for every game, and flag-draped cars honked through the streets after every victory. Football inspires operatic passion in Europe, and the German team was one of the best in the competition: they completely dominated traditionally strong teams such as England (4-1) and Argentina (4-0), and Thomas Müller was the top scorer of the tournament, even though he had to sit out an entire game (and they might have taken gold if he hadn't). Some Germans told me that, because of the past bad connotations of ethnic nationalism, they were often wary of celebrating their achievements. But the mixed background of the modern country is reflected in the team itself: 11 of the 23 players were also eligible to play for other countries: among others, their players included a Bosnian Serb, a Turk, a Ghanaian, a Pole, a Brazilian, and a Tunisian. The fans in Berlin are just as mixed - and the guilt-free enthusiasm of cosmopolitan Berlin has upset the far left almost as much as the multi-ethnic makeup of the team has upset the far right. But with a world-class team like that, why shouldn't they be happy like, say, Canada was last February? Our first in-Berlin game was the July 3 game against Argentina - it was a sunny summer Saturday, so the whole town seemed to be out celebrating in their colours. We walked up from Mitte to Leopoldplatz during the first part of the game, peeking in windows to keep track of the score. We watched the end of the game in an open-air Turkish (and alcohol-free) bakery and cafe. Every time Germany scored, the streets echoed with firecrackers and vuvuzelas. July 6th was the semi-final game between Uruguay and the Netherlands, determining the team Germany might have to play against if they won their semi-final. We were seeing a great show at the Berliner Ensemble and got out just as the game was wrapping up - our fellow audience members gathered around the windows of bars along the riverside quay near the theatre, watching the Netherlands win. July 7th was the semi-final game against Spain. Through the magic of Twitter and the worldwide Rubyfringe confraternity, I was invited to join some of the friendly CouchDB people on a canal-side patio in the hip Kreuzberg district. I had a great time watching the game, drinking beer, and discussing NoSQL. Unfortunately, Germany lost to Spain with a sad 1-0. 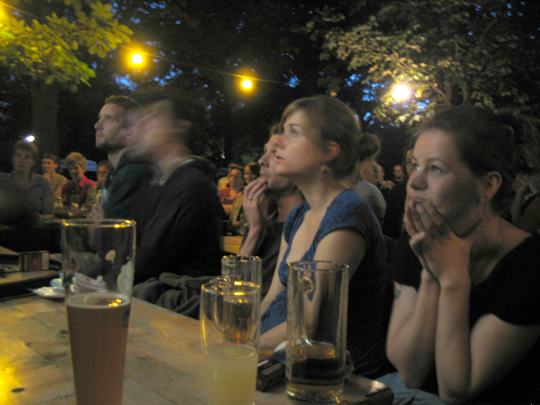 On the way home, Spanish fans cheered through the streets of Berlin - and even on the subway the lone kid in Spanish colours only suffered cheerful ribbing. In the 21st century, national pride shouldn't depend on your ancestors or even where you live anymore - it's should be just a good excuse for a party.