Berlin has a lot of fantastic museums. In fact, the central district of the city is known as Museum Island. One could easily spend months exploring all of the museums and galleries in this city. We only had a few days. Here are some cool ones that we saw:

Not about the goth band, but the German-centered art, design, and architecture movement. Bauhaus was started in the heady days after the war, when the liberal Weimar Republic stopped censorship and new ideas were starting to flow. Even though they moved cities and changed personnel and focus several times, and eventually shut down in 1933 under pressure from the Nazi government, it is hard to overstate their influence over how manufactured and crafted items look in our modern world. The section with chairs and desks looks a lot like the kind of furnishings you'd see in a design-forward office from the late 60s (lots of metal tube construction), which doesn't seem that remarkable until you notice the pieces all date from the 1920s.

There's a wild video - a short promotional film for a new housing development full of Eisensteinian Montage - that highlights the differences between the old fussy Victorian kind of architecture and design, and the new efficient and elegant style.

When we were there, the special exhibits hall was showcasing the high-concept lamps of Ingo Maurer, my favourite being a halogen lamp wrapped in holographic film that makes a ghost of an incandescent bulb where one would be on a normal lamp.

The gift shop is dangerous if you have any space on your credit card!

A bit out of town is the large Babelsberg film studio complex. It's notable as the place where The Cabinet of Dr. Caligari and Metropolis - and more recently Inglorious Basterds were filmed. It is a bit like Hollywood's Universal Studios, where film exhibits and family events share space with actual movies and TV shows being shot. If you're into film, it's cool enough just to be there, on 'G. W. Pabst Allee' - the exhibits are more about film in general, and seem to be aimed more at kids. There's a several-times-a-day stunt show that plays Europe's The Final Countdown, but not really enough about the great history of the place itself. The real film museum is inside the spectacular Sony Center. It has several floors of exhibits on Germany's film history, from early silent films through the Nazi era and up to "Run Lola Run" and beyond. There are several rooms dedicated to Marlene Dietrich, and a nice corner dedicated to Louise Brooks. The hall that covers the Nazi era has many of the items and videos in slide-out drawers, presumably so the darker parts of the past can be stashed away and only brought out as needed. 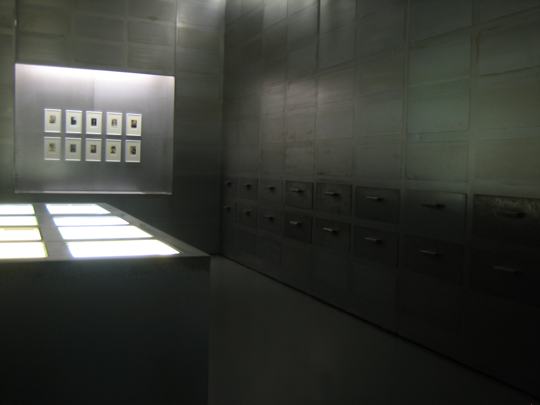 The museum makes great use of mirrors and lighting in several rooms - one that makes you feel like you're walking inside Metropolis: ... and another that gives a dizzying Mise en abyme effect: There is also a hall with bits of memorabilia from notable German films, such as Lola's outfit from Run Lola Run, the wings and breastplate from Wings of Desire, and a shooting model of the boat from Fitzcarraldo This is one of those giant neoclassical buildings on Museum Island. It is so huge that its main exhibits consist of completely reconstructed ancient buildings, gates, and facades. If I hadn't just come from Istanbul, this would have completely blown my mind - as it is, they were still spectacular.

The museum takes its name from the Pergamon altar, the centrepiece of the collection, from around 180 B.C. In the next room is the massive classical market gates of Miletus, originally built around 150 A.D. Through the market gates is another set of gates, in brilliant blue and gold glazed brick, with a long processional hallway leading away into the rest of the museum: the Ishtar Gates of Babylon, built in 575 B.C. by King Nebuchadnezzar II. This is the same Nebuchadnezzar who conquered Jerusalem and brought many of the Jews back to his city - so the people who "By the rivers of Babylon we sat and wept when we remembered Zion." (Psalm 137) likely would have passed under this arch. Remembering my suspicions about the Sword of David I saw in the Topkapi museum, I did look around the Pergamon for other examples of ancient near-eastern swords - I didn't find much, but noticed a stone frieze depicting Babylonian nobles who were carrying swords that had straight, rather than curved, hilts, whatever that's worth.

The Pergamon museum doesn't have air conditioning, and Berlin was going through a heat wave when we visited, so these ancient sites felt appropriately balmy. We recuperated in the small beer patio outside the museum, where I continued my tour of the cholesterol-heavy local cuisine by having a 'boulette' - a juicy cousin of the hamburger.

We also went to the Zoological Gardens. Many of the animals had recently had babies, so there was a lot of cuteness on display. We remembered the fuss a few years back about Knut the baby polar bear - well, he's all grown up now, weighs about 700 pounds, and is separated from the public by six inch plates of fiberglass - a huge killer, like all polar bears, but still sort of cute. 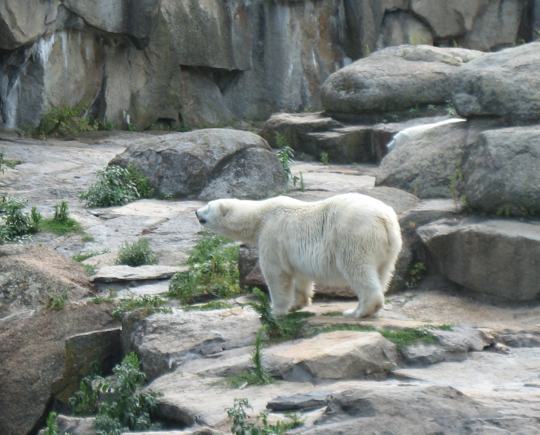 We felt like we were just scratching the surface of the city's museums - we didn't get to any of the great art museums, or really got to explore much of the great antiquities collections either. Some day I'll have to spend a month or two in Berlin. That wouldn't be a bad thing at all.

More pictures can be found in my Flickr set.