The previous few days of hiking had been quite gruelling, so our plan was to take it pretty easy today. We left our bags at the "acceuil" and wandered back to the reservoir area, where we found a museum all about the Canal du Midi. 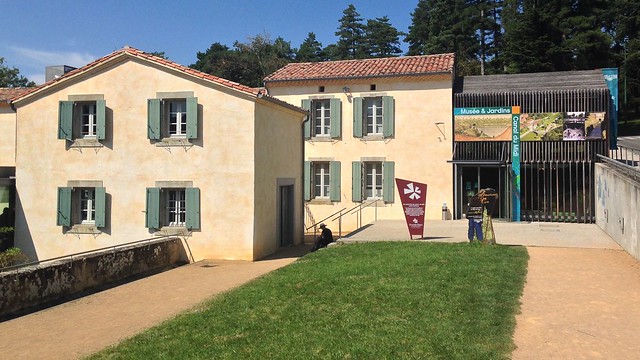 At first I was a bit confused as to why a museum about the canal was up here a dozen or so kilometres away from it, but it turns out that the reservoir and its connecting "rigoles" are the key to the entire enterprise. And since the Canal du Midi turns out to have been one of the crowning engineering achievements of the seventeenth century, it makes sense to have a museum about it.

One of the longstanding tricky things about France's geographical position is that it has ocean access to the Mediterranean on one side and to the Atlantic on another, but no easy way to cross between them. Ships would have to go through Gibraltar and then around Spain and Portugal, risking rough seas, pirates, and enemy fleets. From the north, the Garonne river is navigable all the way to Toulouse, but it's still several hundred kilometres of hilly dry terrain to get to the Mediterranean, near Narbonne.

Canals are able to follow changes in altitude by using locks, which are a kind of "staircase" for boats. Locks open one gate to let boats in, then close their gates and fill up with water to the next level, and then open the other gate to let the boats out. They do the same thing in reverse to go down, but of course need to fill up again for the next boat. So for locks to work, it's essential to have a reliable water supply - and nobody had ever been able to figure out how to get enough water into this part of the country. The Pyrenees mountains were too far away, and through much of history they belonged entirely to Spain. The Black Mountain (where we'd been hiking) was closer, but was generally considered too dry to be a reliable water source.

Enter Pierre-Paul Riquet, regional salt tax collector for Louis XIV. His position had allowed him to accumulate quite a personal fortune, but more importantly it gave him an intimate knowledge of the topography and water drainage of the Black Mountain, since he had to travel all over it to assess and collect the taxes.

Riquet realized that there was enough water in the hills to support a canal, but that it was in lots of little streams and would require some ingenious engineering work to collect and make useful. Luckily, he had always been interested in engineering, and he had a large estate on which to set up experimental water-management systems. He eventually drew up an audacious but detailed plan and pitched it to the King and his chief officers. He was given the go-ahead, but had to raise much of the financing himself.

Reading about Riquet and his adventures in financing and building this previously unimagined technological marvel, I couldn't help but think of modern tech entrepreneurs - even if the material and the political / financial structures are different, it's still obsessive individuals struggling to raise money and build never-before-seen feats of engineering.

Just like a tech project, Riquet was even able to do a "Minimum Viable Product" beta release: he dug out tiny versions of the 'rigole' water feeds, all flowing in the final locations, but only a few inches wide and deep, with simplified miniature versions of the sluices and gates. This let him make adjustments on the real hillsides with only a shovel or two, rather than committing to large earthworks and paving based only on paper plans.

(Or at least I think that's what he did - we never covered hydraulic engineering terms in my high school French classes, so I sometimes had trouble reading the plaques in the museum. Regardless, it seems like too cool an idea not relate even if it might not be exactly what happened.)

Once he got the basics worked out, Riquet built up the full-sized water works up in the hills and the canal down in the valley. This included the largest artificial lake ever made up to that time (we had walked along it the day before), a 700 metre long dam which by itself was the largest single civil engineering project in Europe at the time, some of the most complex yet efficient lock systems in the world, and several hundred kilometres of water feeds and aqueducts, including water tunnels and even water bridges over rivers.

The whole project required 12,000 workers, cost three times the original budget, and was finally finished just a few months after Riquet's death. On May 15 1682, there was a grand ceremonial procession of official barges from one end of the canal to the other - and then the whole thing was drained for another six months of finishing-up work.

The completed canal was hailed as an engineering masterpiece that even the ancient Romans wouldn't have been able to match. It opened up new trade opportunities for much of Languedoc, and of course helped France's geopolitical position vis-a-vis Spain, Portugal, and England.

The canal survived revolutions and wars over the following centuries. Traffic peaked in the mid 19th century as it connected to other canal networks, providing easy access to many other parts of France and Europe. After that, railroads became the dominant shipping method, and now the canal is exclusively for pleasure boating.

The museum featured large terrain maps of the water network, and we could retrace all the places we'd hiked through, from Castelnaudary through to Saint-Ferreol. The villages and roads are all pretty-well the same as they were back in the 17th century. 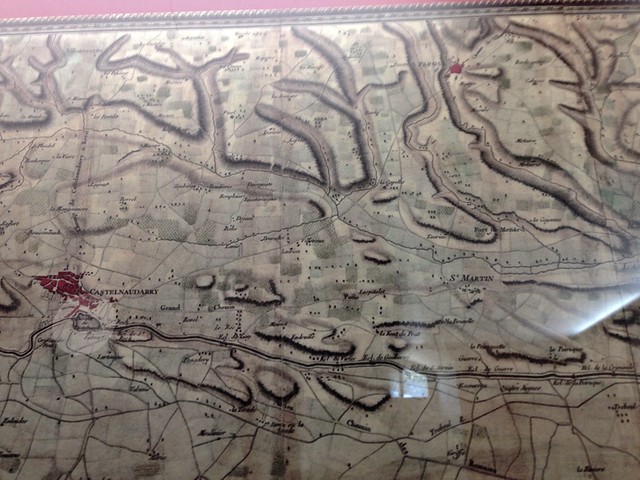 The museum had a pleasant restaurant, and we made up for several days of mostly only eating bread and cheese by having a hearty full meal. I ordered the grill sampler, which continued my Languedoc restaurant tradition of epic meals with lots of meat. 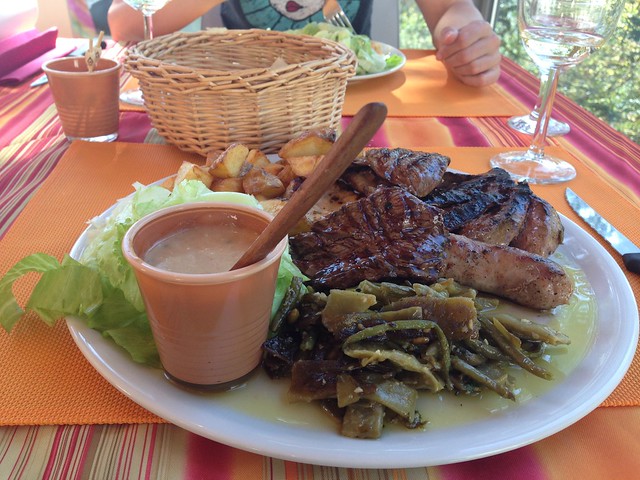 We then walked down through a park below the museum, which featured a number of elegantly arched tunnels into the dam works. 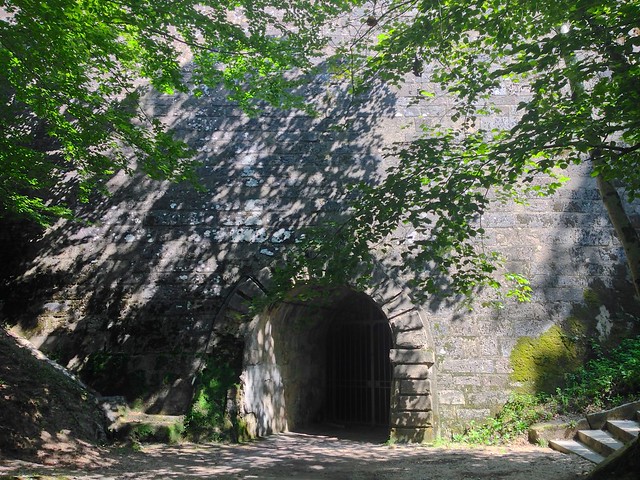 It also had some appropriately show-offy fountains. 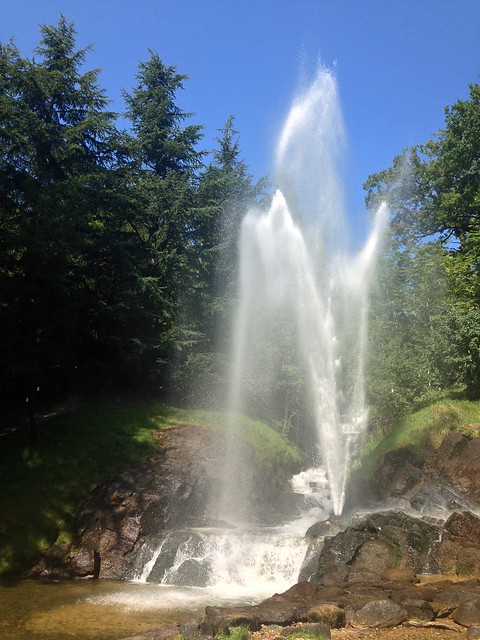 We had a few hours to kill before our next hotel would be ready for us, so we walked back up to the reservoir (much more impressed by the dam engineering now we knew more about it). 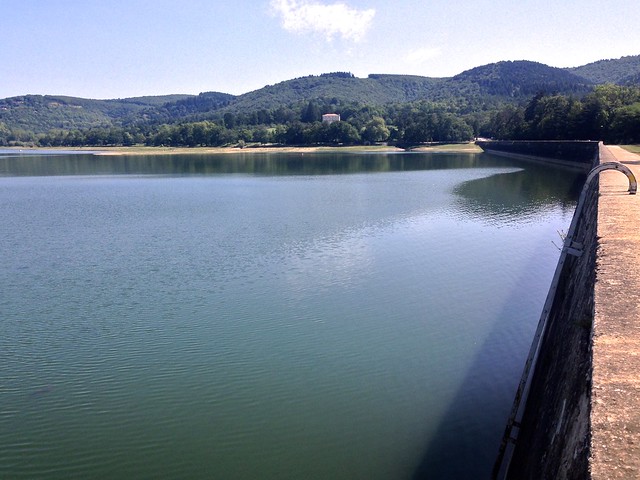 We decided to rest for a bit by the shore. The batteries were close to dead on all of my various devices and chargers, so I watched the world go by instead. 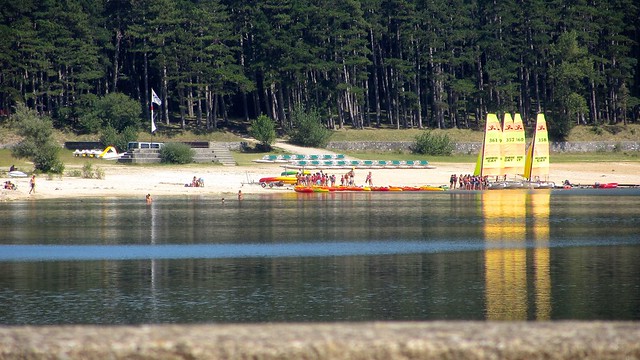 A large summer camp group across the way formed rowboat and sailboat teams and chaotically cavorted around the reservoir, colliding occasionally to the accompaniment of a great deal of shouting. It was like a miniature junior Battle of Salamis.

Dark clouds started gathering overhead - a first for our time in France - so we returned to last night's campsite, picked up our backpacks, and hiked over to our hotel for the night. The walk was only a few kilometres, but for some reason it felt more exhausting than the previous days of long uphill climbs. 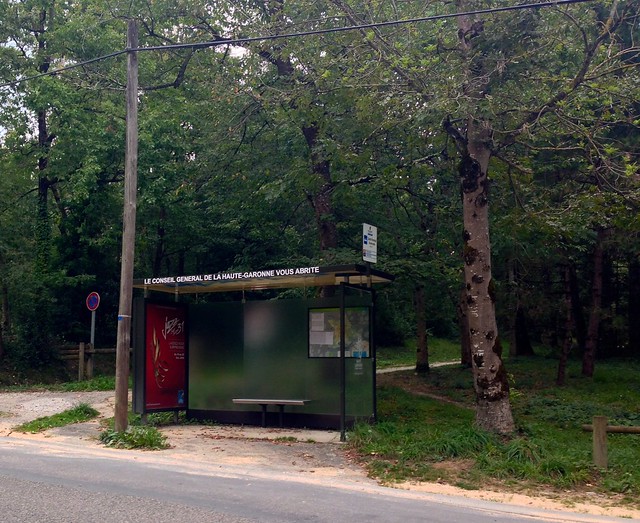 I did, however, enjoy the grand and official-sounding labels on the bus stops: "LE CONSEIL GENERAL DE LA HAUT-GARONNE VOUS ABRITE". This is fine in French, but directly translated it reads as "The Consul-General of the Upper Garonne Shelters You". It made me think of a grand official with medals and gold sashes holding, with Gallic gravitas, an umbrella over the waiting passengers.

Finally, after some surprisingly exhausting climbing, we made it to our hotel, Les Sentiers du Lac. 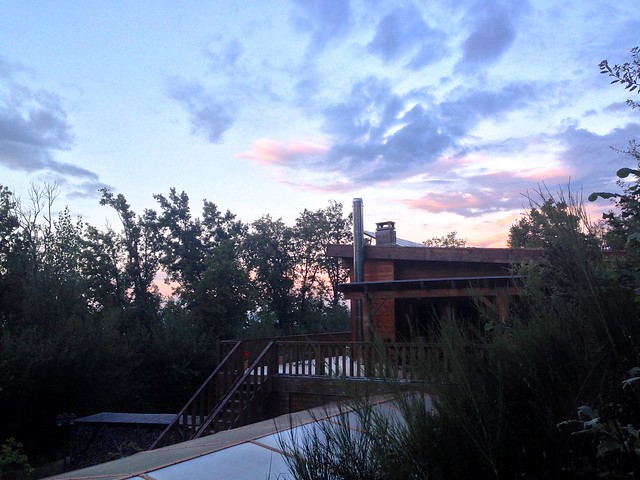 The hotel/resort complex is cozy in a wooden-rectilinear-Scandinavian kind of way, with a surprise dash of the Himalayas. Our room was small and rather spare, but felt infinitely more luxurious than a tent. I recharged all my devices and had a shower and changed into clean clothes. 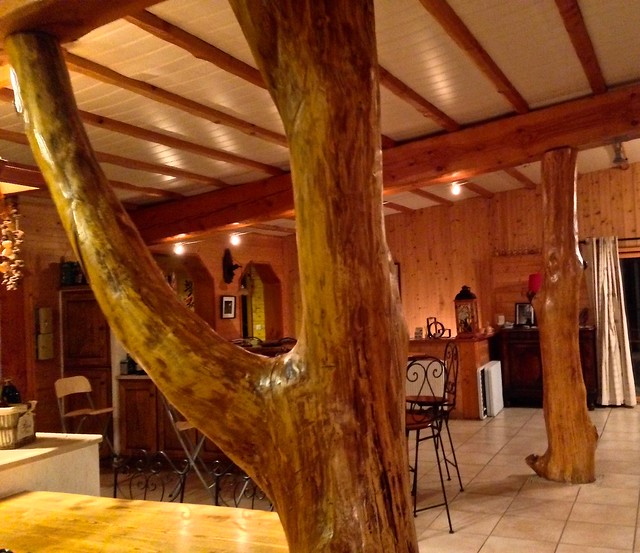 Dinner was in the lovely main hall, and we shared the common table with a group of about a dozen young women who were on a cosmetics sales training retreat. They were each from a different region of France, with different accents and looks, and all of course perfectly turned out and "on point". This group seemed like a perfect setup for an adventure series (the Parisian knows Jiu-Jitsu! The Norman is a master of disguise!), or perhaps a reality TV show with really really good skin, or, if we maybe mixed in a rock band or a football team, some kind of extra-stylish hotel-room farce.

Although we all had to repeat ourselves a little bit due to accents and language, we had a fun, rambling conversation over Tibetan vegetarian food. Then to bed - it was back to hiking tomorrow.