Poland: Warsaw's Palace of Culture and the University Library
Posted on: 2008-09-28

I spent a few days in Warsaw back in July. Two buildings in particular made a big impression on me.

The Palace of Culture and Science is a massive concrete structure in the middle of the city, 42 storeys high, with over 3000 rooms in it. It was a personal gift from Josef Stalin to the people of Poland.

The words "gift from Stalin" don't tend to have good associations, and adding the term "massive concrete structure" doesn't help - but the building is actually quite spectacular, and better looking and surprisingly less soul-crushing than many other large concrete buildings around the world. The Palace of Culture

The Palace of Culture (official site) has dominated the Warsaw skyline and inspired mixed feelings since it was built fifty-odd years ago. The closest thing I could think to compare it with would be how the CN Tower dominates the Toronto skyline, as a signature of the city and a point of reference wherever you are in town - but if it had been built by occupying Americans (imagine much nastier Americans!) and called "The Liberty Tower".

It is so huge that it contains several theatres, a number of museums, an entire wing devoted to health and exercise with several swimming pools, and an entire university on the eleventh and twelfth floors. More recently, the Poles have put in a large night-club and a multiplex cinema - and, as they've done to most of the Communist-era buildings in Warsaw, have put up large advertising posters (which, even though they've huge, barely show up on the building as a whole). 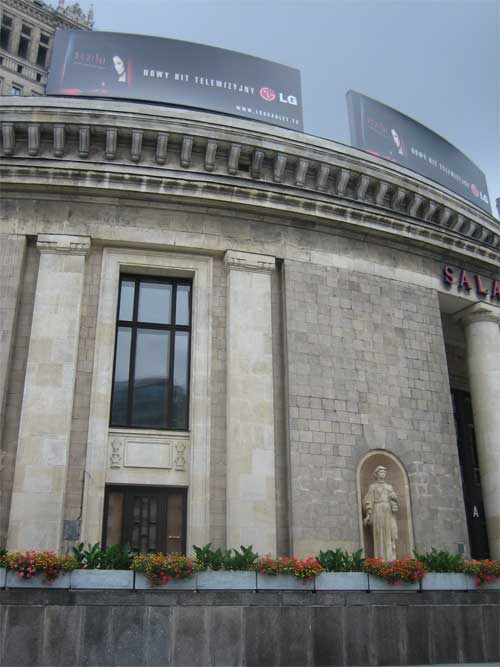 One of the many statues of workers of the world, along with signs for LG's new Scarlet line of televisions. Poland is full of these kinds of juxtapositions.

When you get closer to it, you notice that the concrete is wearing out a bit, but it's such a large building, you get the impression it might last thousands of years, like the pyramids. What's more likely to happen is that Poland will continue its economic boom over the next decades and some time in the 2030s it will be replaced with something newer and possibly taller. Already, they've build a large high-end postmodern shopping mall right across the street - it's only a matter of time.

In a weird nexus of the leftover legacy of central European communism crashing into global cultural capitalism, the posters all around town for the Will Smith movie Hancock showed the Palace of Culture prominently in the reflection of his sunglasses. The American antihero comes to save Stalin's Palace of Culture! Someone could probably write a book on that - won't be me.

Besides what was built by Russians, I found Warsaw to be quite daring in its architecture - many of its buildings, old, new, or new-but-pretending-to-be-old, are quite striking.

The most fantastic building that I saw in Warsaw was the new university library. The street front of the library is grand, with large tablets engraved in different scripts, while the inside is quite pleasant, with lots of glass and low-key steel, copper, and concrete - but it's the roof that is most spectacular: the entire rooftop is a public garden, with winding paths, bowers, well-pruned trees, and occasional pieces of climate-control machinery sticking up like sculptures. It's one of the most futuristic buildings I've ever seen, but it also features Steampunk-style pre-rusted copper and porthole windows. Walking through the rooftop garden feels a lot like walking through a level of Myst.

Words don't really do this building justice - so here are some pictures instead.

The front of the library. Each of the large tablets has writing in a different script and language - Hebrew, Greek, Sanskrit, Latin, Chinese, etc.

I kept wanting to click on things while walking around the library complex.

Climate control vents and machinery on the rooftop look like industrial sculpture.

In a bower beneath a well-trimmed tree is a large porthole that looks several storeys down into the vast reading room. Once again, clickable!

Down to a small courtyard - reminded me of a 'reactor core' from some Star Wars episode. Note the Palace of Culture on the horizon.