Back in July, I went to Poland to attend the wedding of some friends of mine. The wedding was in Krakow, but we started out by spending a few days in Warsaw.

Warsaw was very different than I had expected. I hadn't been to an ex-soviet country since two days in Prague in late 1992, and I didn't really know what to expect. The last city I had been to outside of North America was Caracas, Venezuela, which is a sprawling tropical retro-futurist metropolis with ridiculous traffic, and on some level I expected something a bit like that. I also mostly expected a major European city, like London, with narrow mazelike streets and a dense and ad-hoc approach to built form.

Instead, Warsaw reminded me a lot of Toronto. It's a mostly flat city, with multiple-lane boulevards of relatively well-mannered traffic, extensive parks and gardens, and large buildings. Also like Toronto, it is the biggest city and the financial capital and seems to be resented by much of the rest of the country. Krakow is the traditional and cultural heart of Poland, and, a bit like Montreal in Canada, has maintained a lot more old-world charm than the hustle of Warsaw. The Poles I talked to (even ones from Warsaw) tended to say that Warsaw was too crowded and charmless, and much preferred Krakow. Personally I found Krakow too touristy, and liked Warsaw for its liveliness and willingness to live in the present.

Warsaw sort of has to live in the present, since not much of the city is more than fifty years old. The German army torched the city with Teutonic meticulousness as they retreated in late 1944, reducing most of it to piles of scorched rubble. The entire medieval Old Town and much of the 18th-19th century downtown area was rebuilt in the ensuing decades, so that Warsaw looks like it has a lot more living history than it actually does. You can get postcards that show various landmarks in 1944 (craters and rubble) and 2004 (the new 'original' historic buildings).

Interestingly, the buildings along the Nowy Swiat (the main boulevard south from the Old Town past the University) were rebuilt to look not like the elegant Art-Nouveau buildings that had been destroyed by the Germans, but like the earlier (and less expensive to rebuild) Classical buildings from the early 19th century - I had never really appreciated the complexities of 'reconstructing' lost historical buildings in a city with so many layers of history: which history do you rebuild? This isn't a problem that comes up much in North America.

The city has roughly the same population as Toronto (and lots of highrise apartments in the suburbs) but the core isn't quite as dense with skyscrapers - yet. The massive 42-storey Stalin-era Palace of Culture (which is going to get a post all on its own soon) doesn't quite dominate the skyline as much as it used to - and there is now a stylish postmodern megamall right next to it.

Poland managed to make the transition to capitalism a bit more smoothly than much of the rest of Eastern Europe, and Warsaw has the advertising to prove it. Interestingly, it seems to be mostly Soviet-era buildings that have giant ads stuck on top of them - perhaps it's not considered defacement to stick a big glowing company name on top of one of these concrete International-style highrises, while 'older' buildings and newer buildings are exempt from such 'spoilage'. 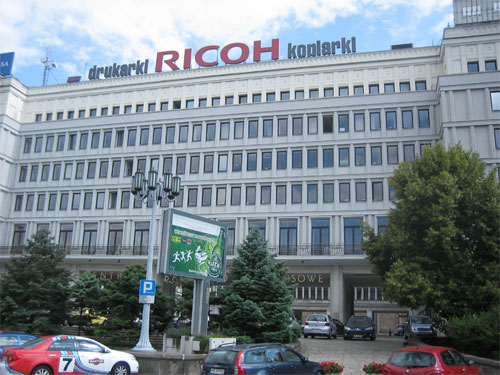 That said, some of the Soviet-era architecture is quite spectacular - sometimes overwhelmingly massive, but sometimes quite funky, like these apartments: 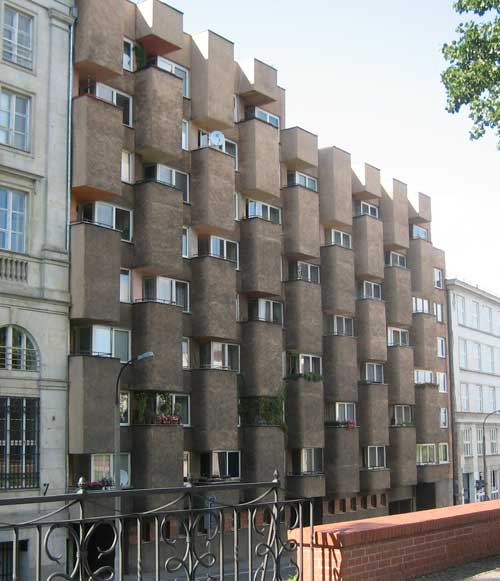 (By the way if you're reading this on Facebook, they seem to have trouble showing pictures in imported blog posts - so you may want to go to the actual page on andrewburke.ca).

Like Toronto, Warsaw is full of patios in the summer. However, Warsaw seems to do patios right - here's one built around an old well (the tap water is supposedly fine in Warsaw, but people often still get their water from wells like this charming building - of which there are a quite a few around town): 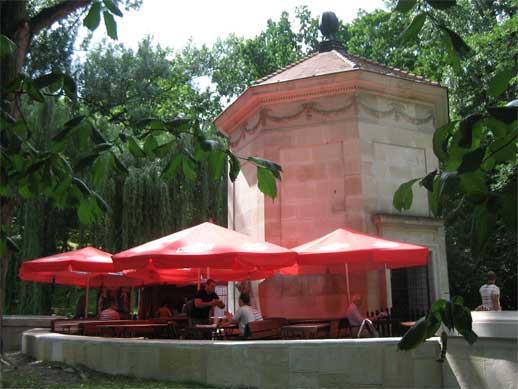 These patios all sell the same handful of refreshing Polish beers and serve basic foods like sausages and pierogies - and make a perfect place to spend an hour or so on a nice day.

If you want the real (whatever that means in Warsaw) pierogi experience, you have to go to the Pierogarnia Bednarskiej: 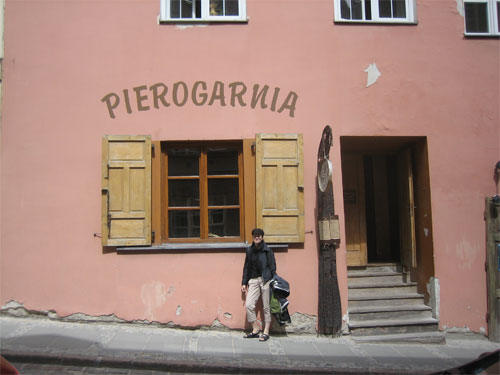 Restaurants that serve traditional polish food tend to have a very rustic, medieval feel, and this place, just down from the Old Town, is no exception. The prices are reasonable (especially since the food is so filling) and it's not quite as touristy as the flashier places up the street. They also have a variety of vegetarian options, which is always a refreshing change in central Europe.

I now have a bit more time on my hands, so I plan to do write a bit more about Poland in the next while.