When I was in Warsaw last July, one of the places I went was the "Muzeum Wojska Polskiego" - or, the Polish Army Museum. The interior was closed for the day, but the park outside was full of planes, tanks, and other such equipment. I'm not a big fan of war or militarism in general, but I have to admit I have a certain fetish for military gear, especially airplanes. I've been to many museums in North America, but they all have the same Sherman tanks and F-86 Sabres. Since Poland had been on the other side of the Iron Curtain, its armed forces used mostly Russian equipment - so almost everything in this museum was new to me.

Here are some pictures and notes:

The first thing you see coming into the park is a MiG-29. What a great-looking plane! Presumably this one is broken or a mockup, since the MiG-29 is still a top-of-the-line fighter. Here's another view of the MiG-29. Notice the patio umbrellas behind it - Warsaw loves its patios! There is also a classic-but-a-little-rusty MiG-21 on display as well. 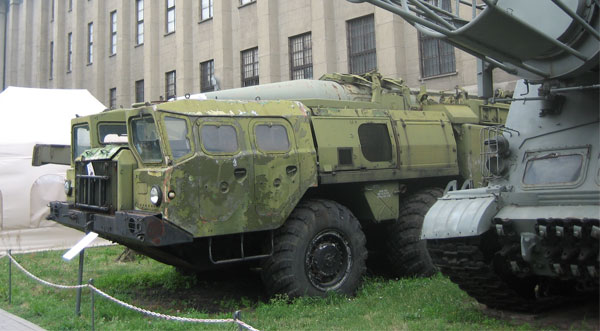 Anyone who remembers the first Gulf War in 1991 remembers the SCUD - the short-range ballistic missile launched by Iraq against Saudi Arabia and Israel. Iraq had bought them from Russia, who also supplied them to Poland. I remember the diagrams of the cool-looking launcher trucks on the news - and here was one of them, complete with a SCUD missile on top. I'm not as much into tanks and other armoured vehicles (they did have a T-55 tank and I think a T-72) but I liked this amphibious troop carrier that reminded me a bit of the tourist buses/boats I see in Toronto and Halifax. I was trying to find a good angle to get a picture of this line of massive naval guns when a little girl walked by wearing pink and clutching a McDonald's Happy Meal. The most striking item at the museum was "Kubus" (the Bear) - a custom armoured car made from a Chevy truck by the Polish Home Army (in 13 days in an auto shop under continuous enemy fire) during the Warsaw Uprising. Behind it you can see a German Armoured Personnel Carrier that was captured and also used in the Warsaw Uprising. There is supposedly a mobile replica of Kubus that takes part in parades and reenactments.

I gather that the inside of the museum has a great collection of medieval and Napoleonic-era weaponry, armour, and banners - as well as, of course, Winged Hussars.