If you go to enough museums in Poland, you inevitably discover the Winged Hussars. These were Polish heavy cavalry from the late Medieval period through to the eighteenth century, and they were totally bad-ass. They were fully armoured, carried lances, huge swords, and (later on) guns, and usually had impressive only-in-Poland moustaches. Their most spectacular feature, which gives them their name, are the actual wings attached to their backs - two metal blades coming up from their shoulders, with real feathers sweeping back behind them. Not only do they look spectacular, but rumour has it that these wings were designed to make a screaming sound as they got to a certain speed in cavalry charges.

One of the core events in Polish history is the lifting of the Turkish siege of Vienna in 1683 by 20,000 cavalry, led by several thousand of these straight-from-a-fantasy-novel-cover warriors. If you've seen The Return of the King, imagine the lifting of the siege of Minas Tirith, but with four times as many cavalry. The Turkish forces were so thoroughly routed that the museum in Krakow has an excellent collection of seventeenth-century Turkish artifacts, like tents, fine carpets, coffee services, and jewel-encrusted weapons and armour.

There are various pictures of these guys on the web, but most seem to be attached to flaky anti-Muslim web sites. Here's a picture from wikimedia: 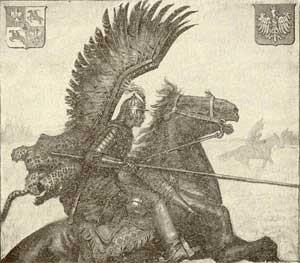 And here's one from my trip: a memorial statue in the park outside the Polish Army Museum. it's a bit stylized but the wings are actually about that size - as is the massive sword, designed for use on horseback. See what I mean by bad-ass? 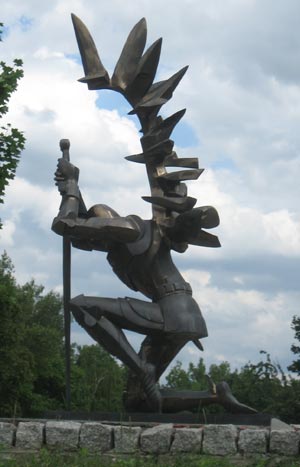 (Update from 2010: Speaking of bad-ass, there's a great Badass of the Week entry on the Winged Hussars:

Their primary implement of facial demolition was a lightweight (yet still completely insane) 19-foot lance capable of outreaching even the most well-endowed infantry spear hedges, and after they splintered that up the asses of their foes, the Hussars could fall back on pistols, a dagger, and one of two different types of swords. Why they needed two different swords is beyond the scope of my knowledge, but I'm pretty sure that I support it.