We had had pretty nice weather for most of our trip, but it looked like it might be turning soon. From my tent I could see thunderheads roll across the valley below us, bubbling peaks flashing with lightning. We had brought rain gear but had hardly ever used it. Hopefully today wouldn't be the day.

We loaded up with water and bread and olive oil and sausage and cheese for snacks on our way. The local grocery store had made a big deal about a local wine, "Le Philtre D'Amour" ("Love Potion") which claimed to be more authentically medieval-style, i.e. mixed with various spices and herbs - based, supposedly on an original from the time of Charles VII and Joan of Arc. I gather that this part of the country lives in the French imagination as the place where the Middle Ages happened, and so a lot of the tourist kitsch here looks back to that time.

I hadn't had spiced wine in a long time, although I gather that this is the most common way of drinking wine up until just a few hundred years ago. I decided that it might make our hiking through the medieval countryside even more authentic if we had some of this wine at hand - like we were wandering troubadours or something, so I poured it into our travel flasks. 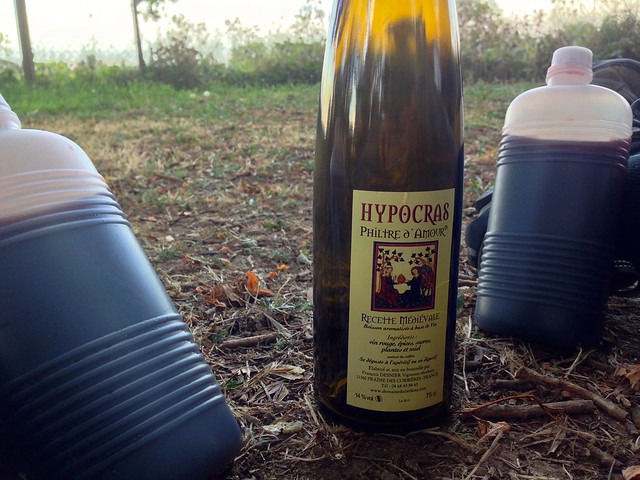 Since this is France, you're perfectly allowed to carry wine around in a flask while you're walking down the road in broad daylight. It turned out not to be all that great an idea, though. It was a very hot and humid day (a roadside sign at one point said 34 Celsius - although it might have been picking up reflections from the asphalt - but then again so were we), so water seemed like a much better option most of the time. The walking made the wine slightly foamy, and the heat mulled it slightly, so it wasn't the most immediately palatable thing to drink either. Of course, warm foamy slightly off spiced wine might have been even more authentically medieval, but we realized we were more used to the 21st century.

After Saissac we mostly kept to main paved roads, which didn't feel particularly medieval at all. However, Saissac itself was lovely. Just getting into town from the campground involved passing multiple outlooks with stunning views of the castle and the valley beyond: 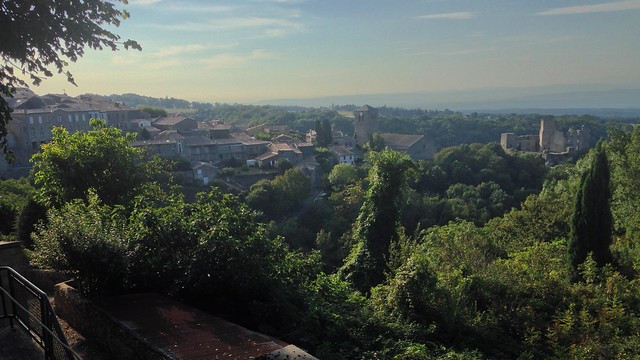 The town itself managed that unique Languedoc trick of being a hodgepodge of centuries-old ad hoc structures while still seeming to be perfectly turned out and pristine. The hot summer sun and perfect blue sky probably helped - I'm guessing they don't look so prim in the rain in February. 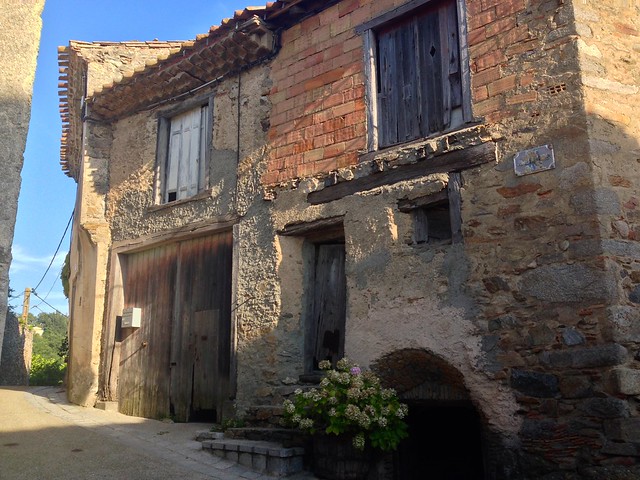 I imagined an interesting story behind this charmingly faded door to the (presumably) Ecole des Filles with the broken-out bottom corner - looks like they managed to escape! 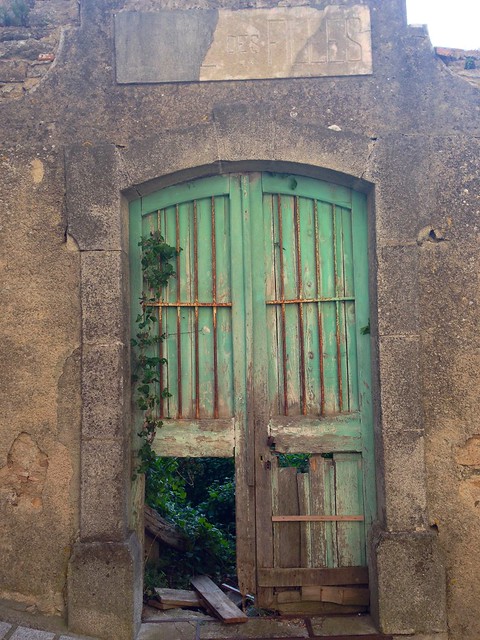 Saissac is so hilly that frequently monuments are below you, or the tops are at eye level. This let me get some nice zoom shots: 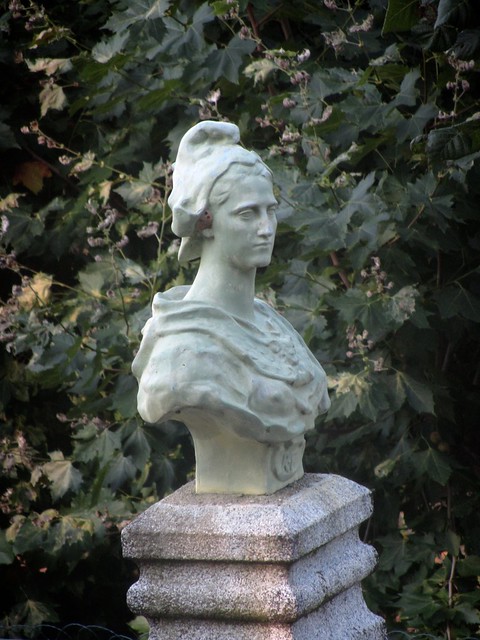 We took turns exploring the ruined castle, which felt exactly like something out of Dungeons and Dragons, complete with hidden treasure.

As we headed out of town, things got surprisingly even more nerdy: a monument commemorated two locals who had been killed near the end of WWII, as part of the "Maquis de la Montagne Noire". 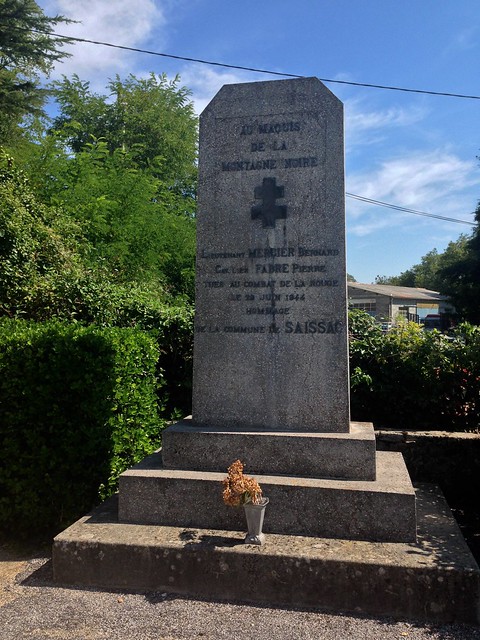 I had only ever heard of "the Maquis" as a rebel group in Deep Space Nine, and it turns out the term (which officially means "scrubland") was applied to French resistance guerrillas, especially those who operated out of rough wilderness. With its excellent views of the busy valley below and numerous hidden nooks, I could see how the Black Mountain would be ideal for guerrilla warfare.

Looking back, we could see the commanding view the castle had over the surrounding area. 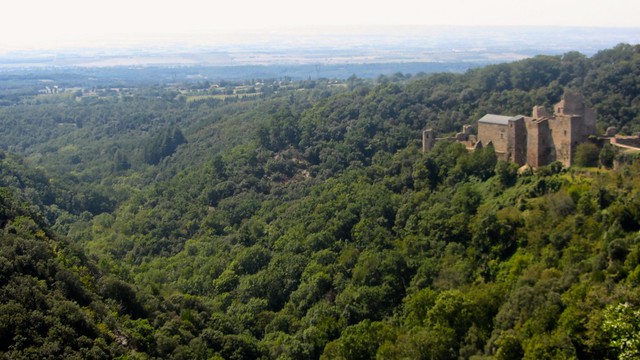 Soon, though, we were on a hot and busy road, crossing open country. Today's hike wasn't especially long compared to some of the others, and it was mostly down-hill - but it was extremely hot and our exhaustion and aches from daily hikes were beginning to accumulate. We took frequent breaks in fields by the side of the road. While in Canada, a fallow field would have dandelions and maybe milkweed, in Languedoc they're full of flowers and wild lavender and other fragrant herbs. In Languedoc, even empty fields are a joy for the senses.

We crested a small rise with a long view into the east. I saw what seemed to be a larger town in the distance, so I took an extended zoom shot, hoping that there'd be something there I could extract later on my computer. 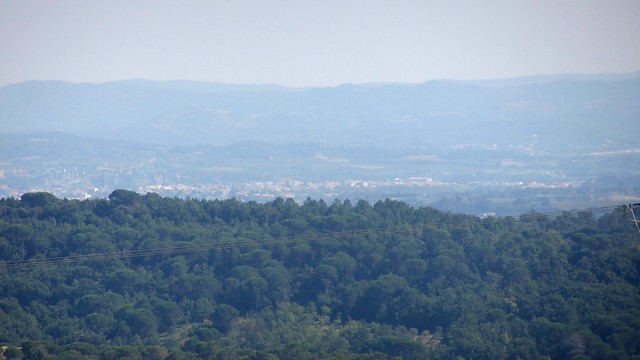 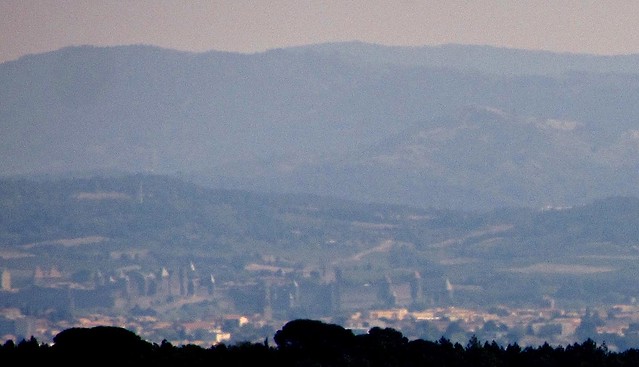 And there it was - my first glimpse of the mighty and impregnable walls of old Carcassonne! This was our final destination on this trip, and it was already visible, if just barely.

But tonight, we were staying in Montolieu. First we saw it in the distance. 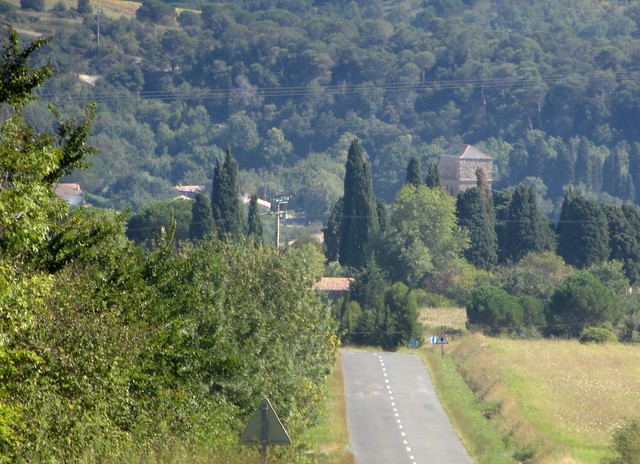 Soon we found ourselves crossing a large bridge over a deep ravine - and had a spectacular view of Montolieu, perched on top of a steep outcrop. 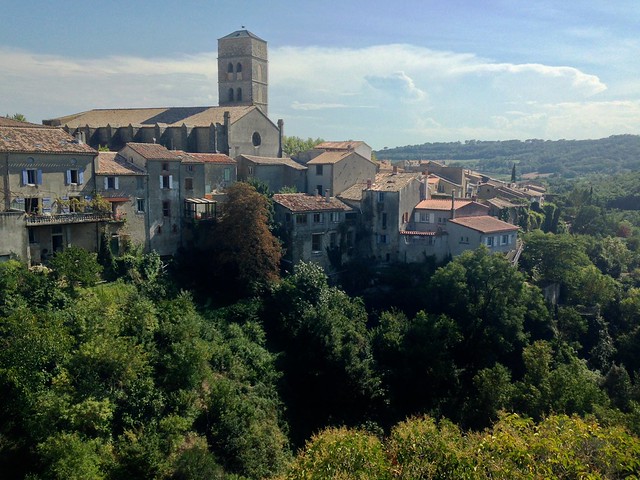 Crossing the bridge, we entered the town. Montolieu is pretty like the other mountain towns we've been through, but with a lot more open shops, traffic, and bustle. 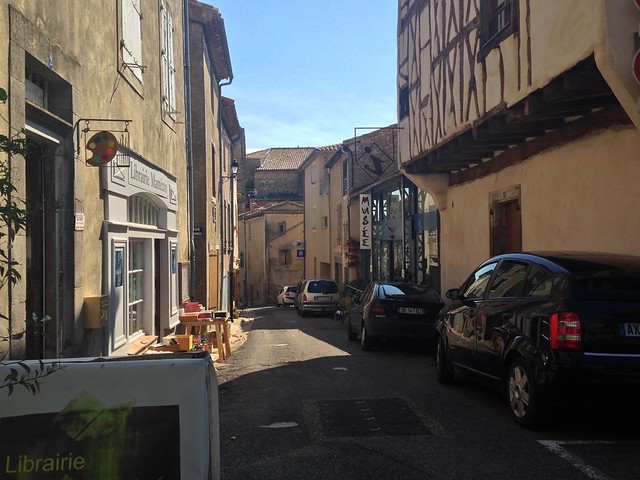 Also, lots of books, and lots of cats. 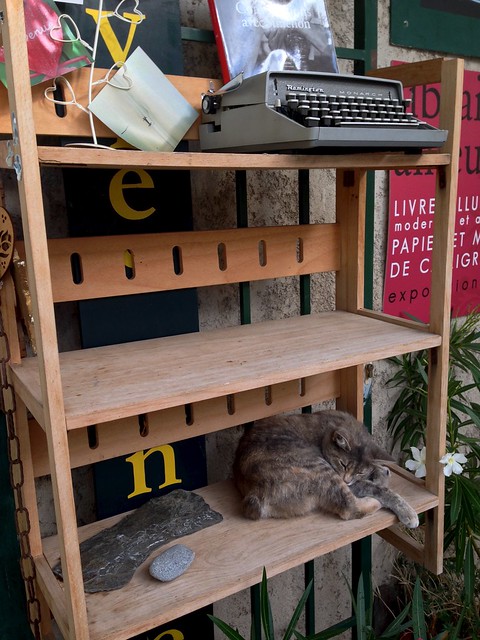