Many of the campgrounds in this part of France double as fun farms for kids, and Camping de la Rigole was no exception. We awoke to the genuine sound of roosters, doing their French "cocorico!" 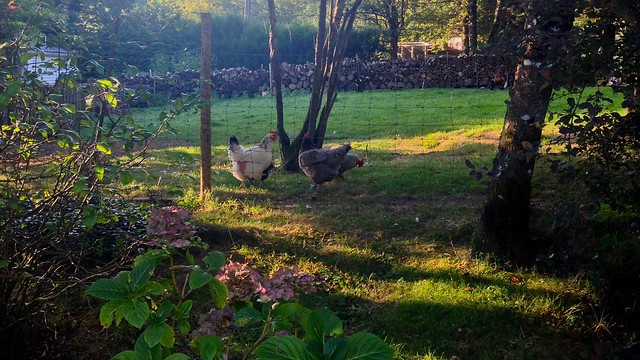 After packing up and checking out, we passed an old phone booth, repurposed to presumably more useful things. This somehow seems to be a perfect symbol for telecom in the early 21st century. 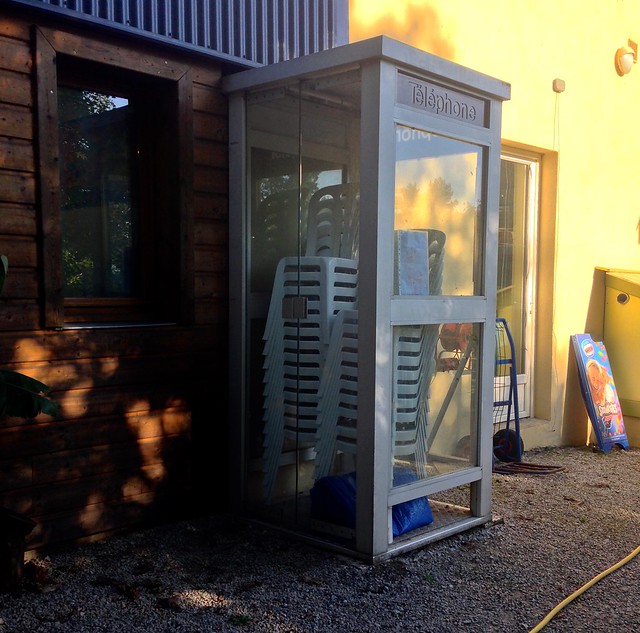 At the entrance to the campground we saw a distance marker: 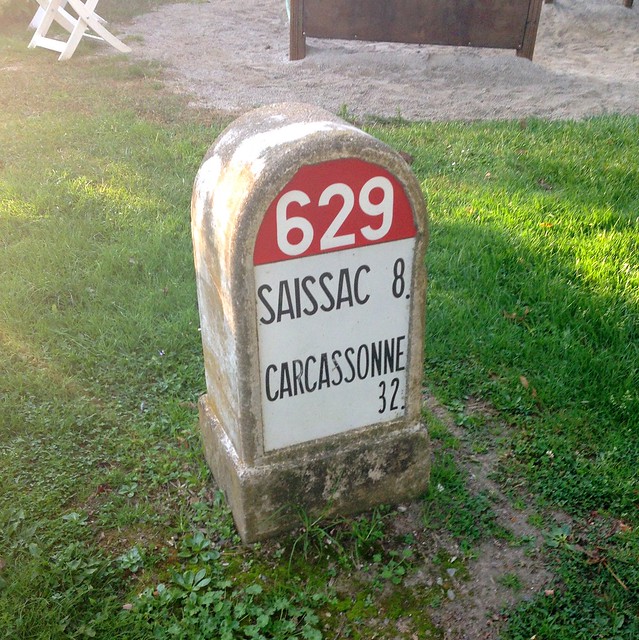 We were staying in Saissac tonight, so it was good to see exactly how far we needed to go.

Most of the first part of our day was spent walking in tall forests, on a well-defined hiking path along the "rigole", the precision-engineered feeder stream to the canal network down in the valley below. 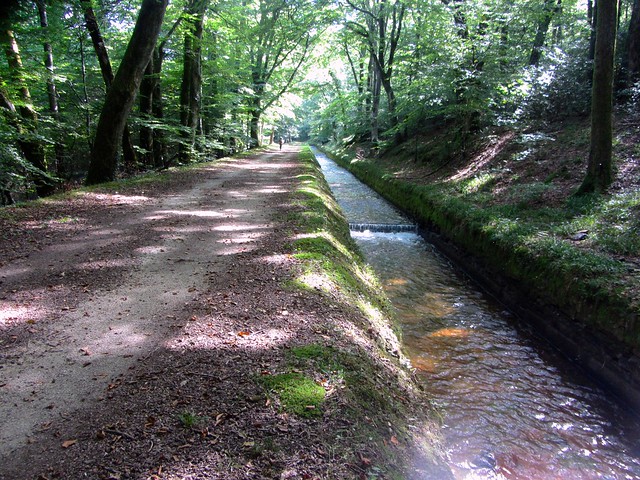 The mix of chaotic forest and long straight riverbed was striking. Even the altitude adjustments were regulated with little waterfalls. In many ways this is the 17th-century version of the long straight power lines that cut across forests and hillsides. In fact, the rigole is a kind of a power line, but with water. It's easy to forget that this entire canal system was devised before steam power or electricity - it ran entirely on gravity and muscle.

It turns out that the lighting here, with bright beams of sunlight cutting into darker forest floor, was particularly tricky for photographs. If I had a fancy DSLR with unlimited settings and maybe a tripod, I could probably get better results - but as it was, between my iPhone and pocket camera, I had to deal with either blown out highlights or blurry shadows - or both.

The blown out lights did give things an appropriately magical look, though. 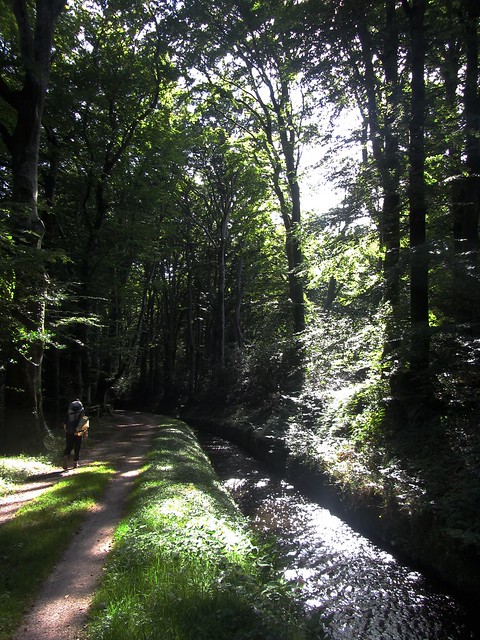 Every so often there was a little bridge across the rigole. I kept trying to get the Perfect Pretty Bridge Photo. Here's the best I could do, with some Instagram magic on top. 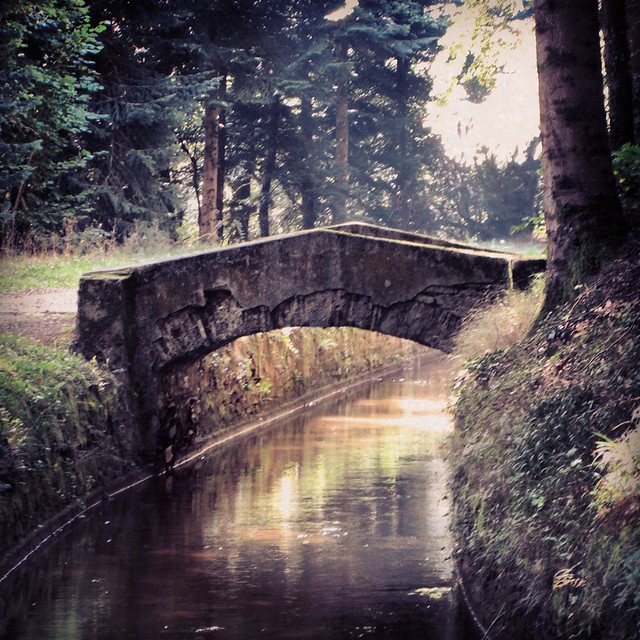 On this stretch of path we even saw other hikers - French hikers, no less. However, they were on a day hike and eventually retreated to their cars at a convenient parking pull-out a few kilometres along.

Soon we came to the end of our forest hike. Our road to Saissac and the waterside Grand Randonné path were splitting up. Right before that, the rigole gave us a last treat: a small aqueduct where the rigole passes on a little bridge over a natural stream. 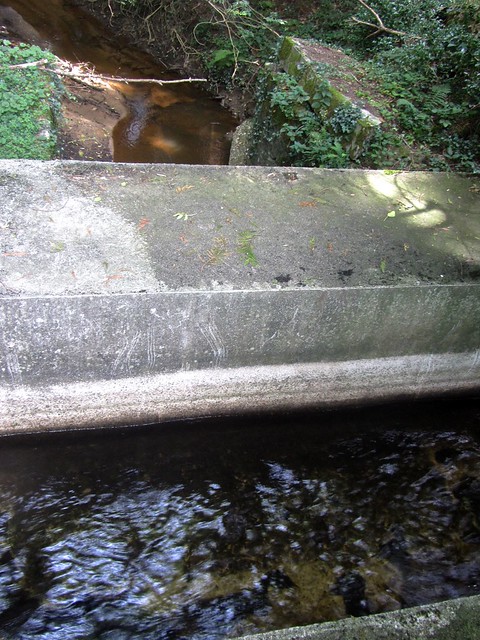 We sat on the edge of this bridge for a quick break. I noticed the trees around us looked a lot like California redwoods (as seen in Return of the Jedi, for example) - perhaps they were imported here for some reason? I discovered that I could get much better pictures in the forest on my Canon camera if I forced the exposure down a few steps: 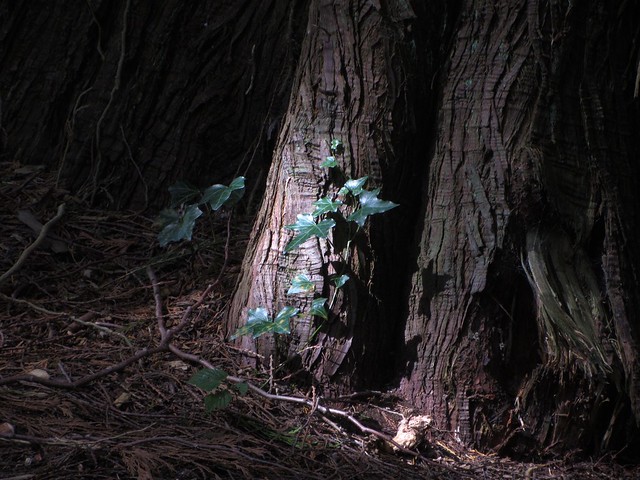 We were back on a road with traffic again, but it was pretty quiet up here on the hilltop. Soon, though we started to descend back down towards the valley. The next gap in the trees revealed our old friends the Pyrenees mountains in the distance again. 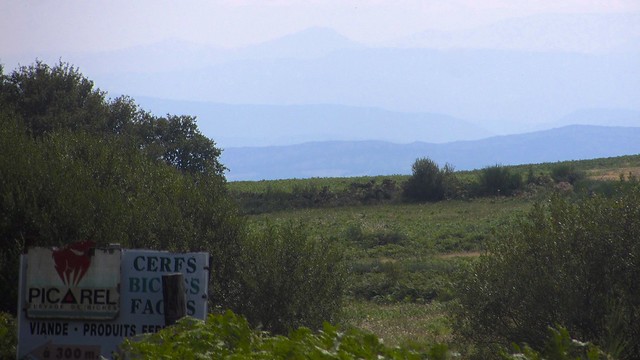 This stretch of the roadside hike was hot and a little boring. Our map noted that there was a megalithic Menhir nearby, so we decided to try to find it and get a closer look. We discovered it lurking in the brush at the far end of a field. 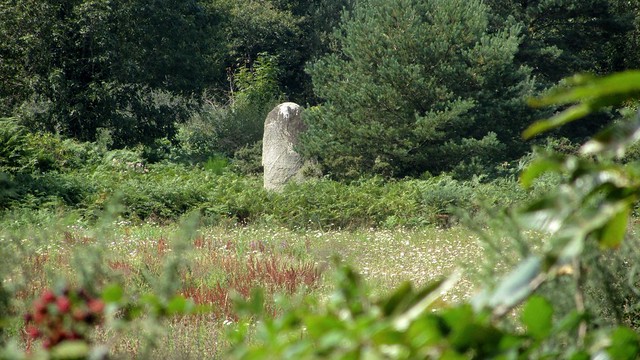 We got pretty close but decided not to brave the prickly thicket. I did notice a pretty butterfly in amongst the thorns: 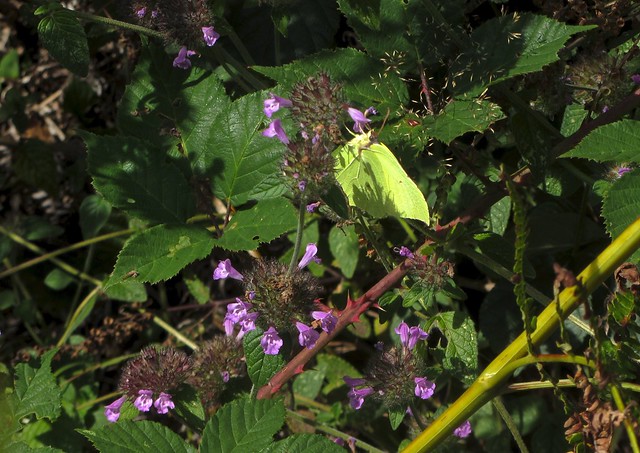 Eventually, we made it to Saissac. The view as you come down on the town from above is quite something - dominated by a ruined castle overlooking the valley below. 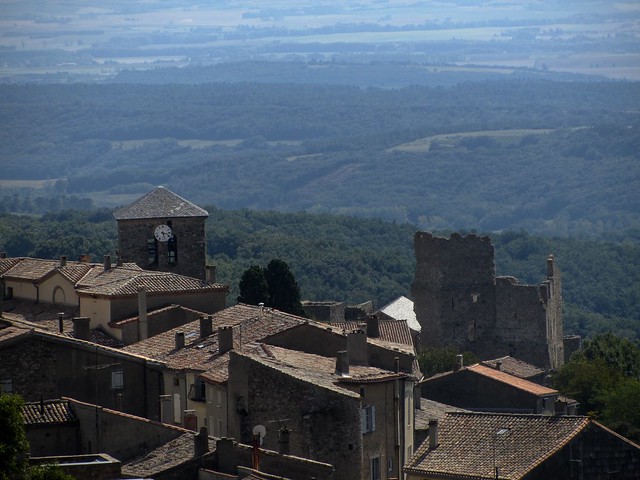 Saissac was the largest town we'd been in for a while, and we were happy to see it had a fully-stocked grocery store, conveniently right next to our campground. We got some wine (of course) and some vegetables and onions and cooked up a hearty couscous curry at our campsite.

Our campsite, Camping La Porte d'Autan turned out to have a spectacular view of the valley below, and I had a lot of fun picking out details with my Canon's 14x zoom: 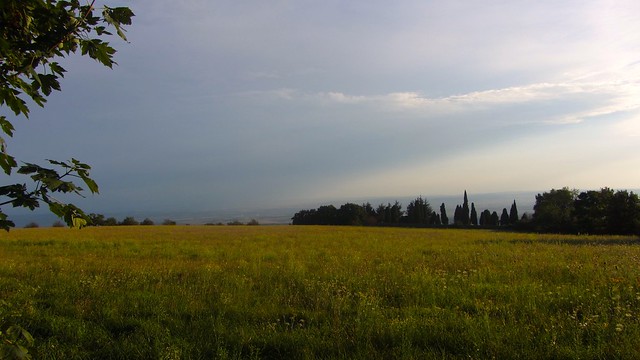 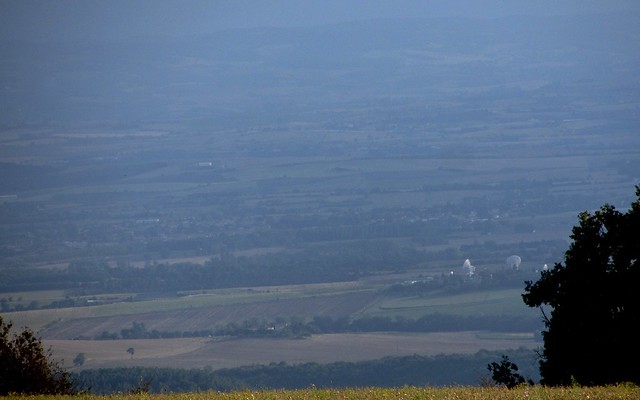 As soon as we settled in, a local cat came by and adopted us for the evening. 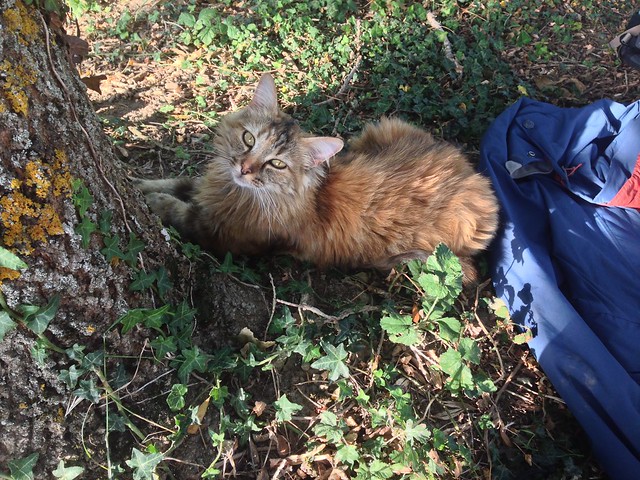 We have a lot of experience in keeping cats away from our food, but that didn't seem to bother this cat much. It continued to hang out with us, and decided to catch the last bits of the sunset: 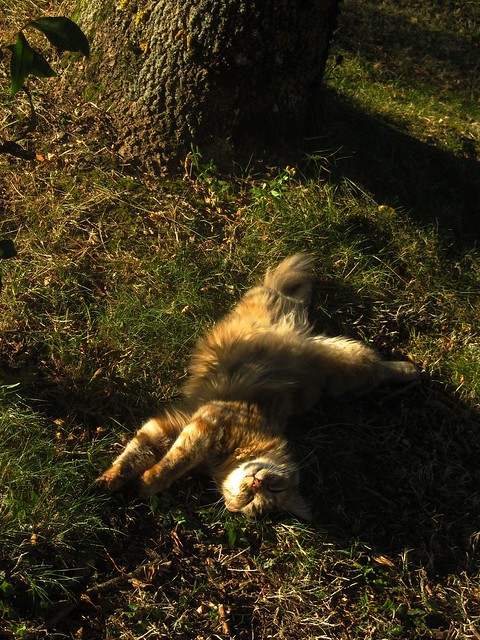 Eventually, though, it decided that hunting for dusk mice in the nearby fields was probably more fun. 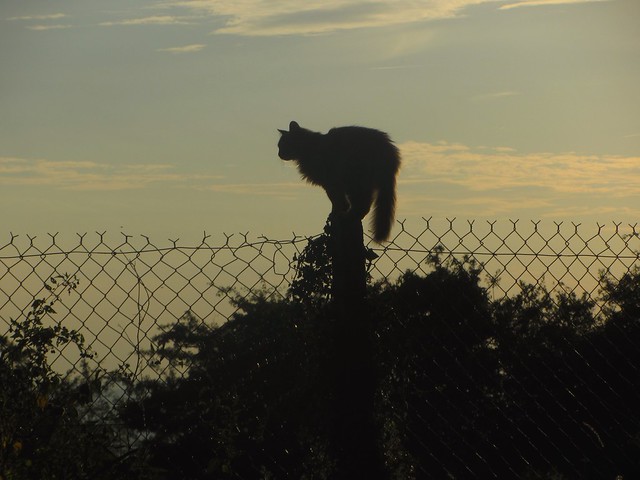 This meant that I could drop my guard over our food and more thoroughly enjoy the spectacular sunset happening right before me. 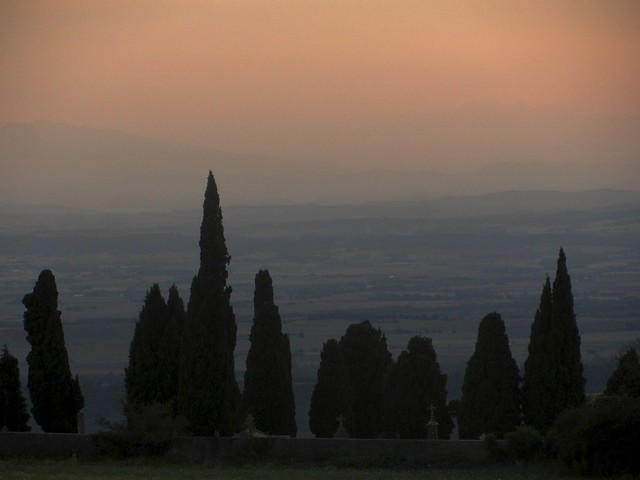 After the sun went down, I noticed it still shining red in a nearby tree: 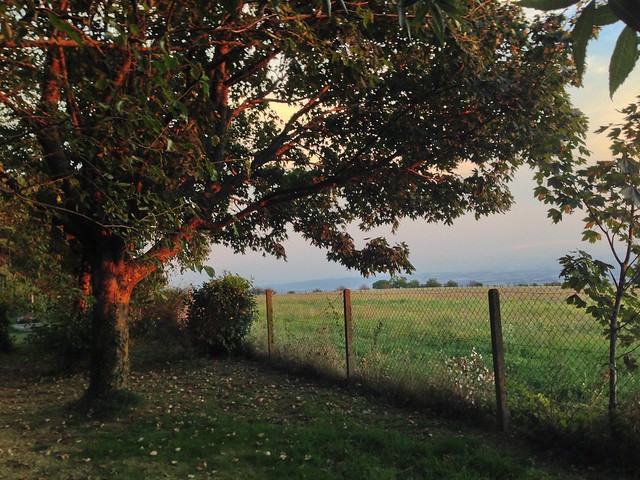 So I climbed it and got a repeat of the last moments of the sun. 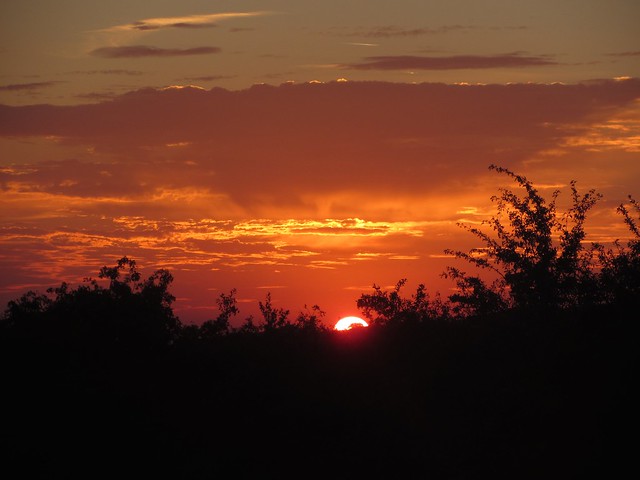