Every visit to Venice should include a side trip to Padua. It too is full of art and architecture, but it has a much longer history. It's also only a short 30 kilometre train ride away - closer than Oshawa is to Toronto.

For one thing, after spending too long in Venice's tourist-packed historical snapshot world, it's nice to be in a real living city, with streetcars and mopeds, commuters, and comparatively normal and occasionally ugly buildings.

We stepped out from the train station into a refreshingly living city. After the baroque excesses of Venice's churches, I rather liked the station's clean Modernist take on Roman columns - although I later found out that this was a rare surviving example of Fascist architecture: 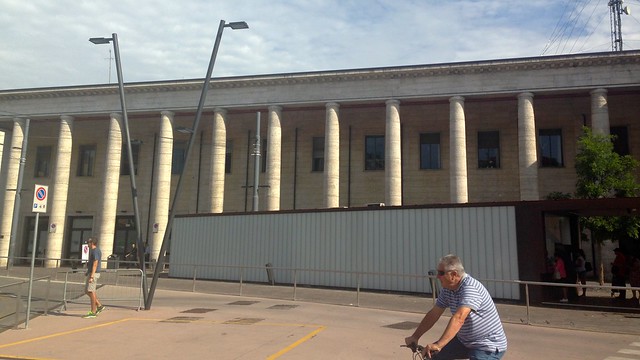 Our first destination was a few blocks to the south, the Scrovegni Chapel. It's in a pleasant park full of sculptures and surrounded by the wall of the ancient Roman arena. 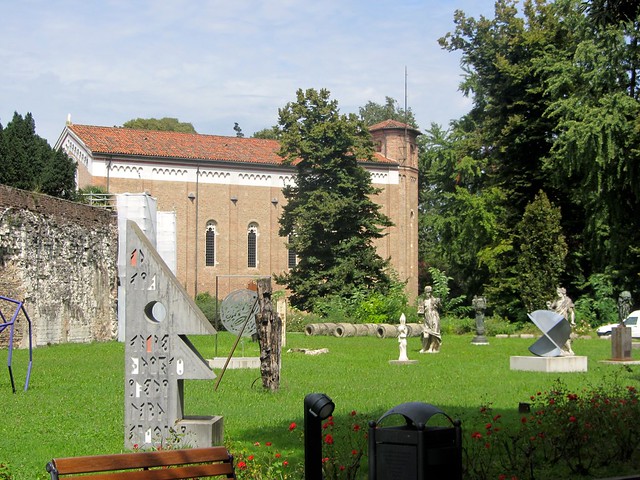 The Scrovegnis were a wealthy banking family whose business had dipped a bit too far into the loan sharking side of things. They had been excommunicated, and the elder Scrovegni had the dubious honour of being personally listed by Dante as occupying the seventh circle of Hell. To atone for this, his son Enrico Scrovegni built a chapel on their family lands on the site of the old Roman arena. They also spent a lot of their ill-earned money on the hottest up-and-coming artist of the day, Giotto.

You have to reserve ahead for a strictly-timed visit to the chapel, starting with fifteen minutes of sitting in an airlock chamber to stabilize the climate for the space inside. They don't allow pictures, so I don't have any to share here - but there are plenty on-line if you want to see them.

Our time scrutinizing the column capitals at the Doge's Palace had taught us to read building decorations like a book, and this was no exception. I also ended up focusing on just one set of pictures rather than getting overwhelmed by the huge density of art in such a small space. Each individual panel tells several stories, not just from what's in it but also from the history of art and representation and technique.

I especially liked how, in the corners, Giotto had painted fake marble onto the plaster. I've always considered plaster or wood painted to look like marble as a more palatial form of the same impulse that led to the incongruous fake wood siding on my 1982-vintage Intellivision. Most places I've seen with painted marble do it as a cheaper and inevitably lesser substitute for the real thing. But in this case, as part of the masterwork of the first great artist of the Renaissance, these painted fake marbles are far more special than any chunk of rock cut from the nearby Alps.

There was a museum next to the chapel. At first it seemed to just be a courtyard with some ancient Roman columns and a small collection of other antiquities, but we discovered that it was several floors of art and artifacts. My favourites were some very striking clay statues of mourners (although I can't find any pictures of them online) and a room full of paintings of androgynous warrior angels.

By the time we had found our way out of the maze-like museum, it was already afternoon and we wanted to find a place to sit down and have some lunch. We headed south to the Piazza Cavour and settled on the lovely patio of the Caffe Cavour, where we had wine and prosciutto and gnocchi and tiramisu. 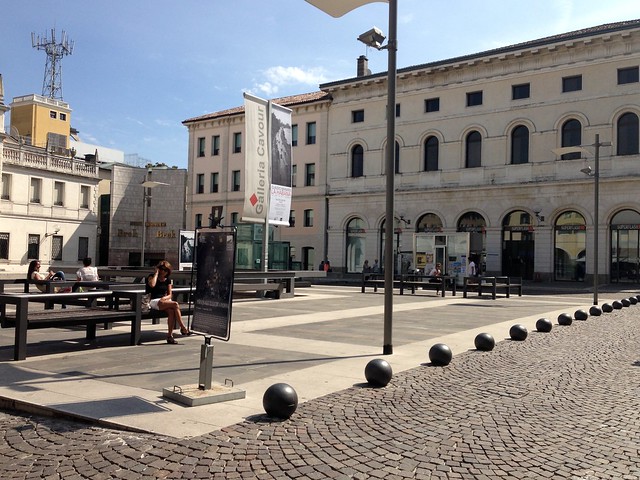 We discovered a Zara across the street, which allowed me to finally buy a nice belt and a scarf - I had mostly packed for a camping/hiking trip and was feeling out of place here in Italy, surrounded by amazingly well-dressed people. It wasn't as bad in Venice since it was full of tourists, but Padua was a different story.

(This next thing needs a post of its own. To be continued.)