Venice is notable for its narrow streets and human scale. So much of what's charming about the city is at eye level and rich in intimate details. That said, though, there is a great deal of large-scale grandeur as well - and it stands out so much as it contrasts with the close horizons of the rest of the city.

Having spent much of its history as one of the richest cities in the world, Venice has more than its share of monuments, grand palaces and flamboyant churches. But because everything is so closely packed, you often can't get far enough back to get the full impression of some of the buildings. You end up craning your neck a lot to get a sense of the scale of, say, a nearby church: 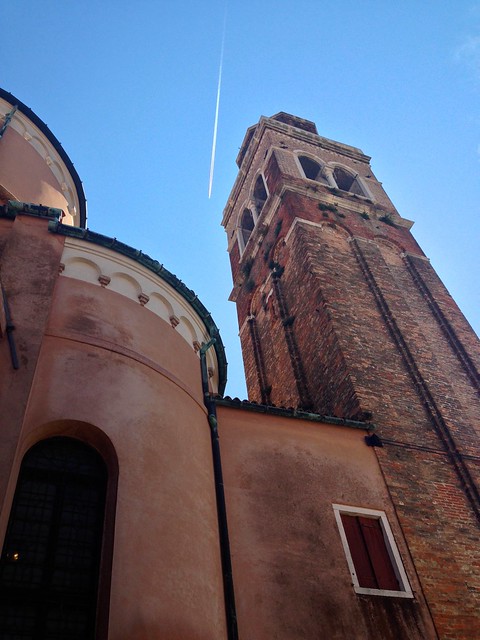 You can sometimes catch a glimpse of something monumental at the end of a street: 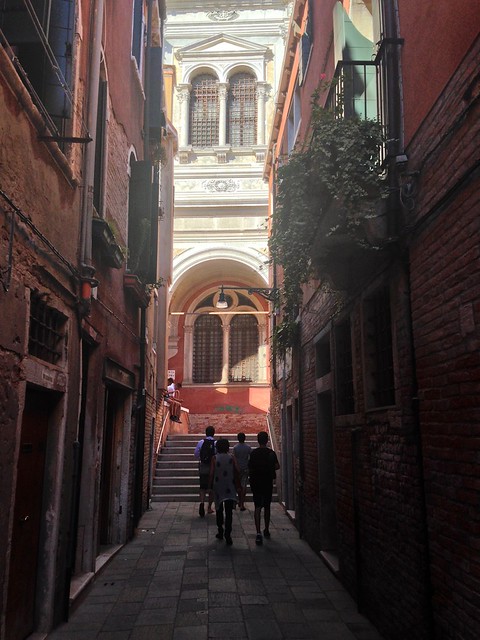 Or, while crossing a bridge, you might have enough space to see at least part of a large piece of modern art: 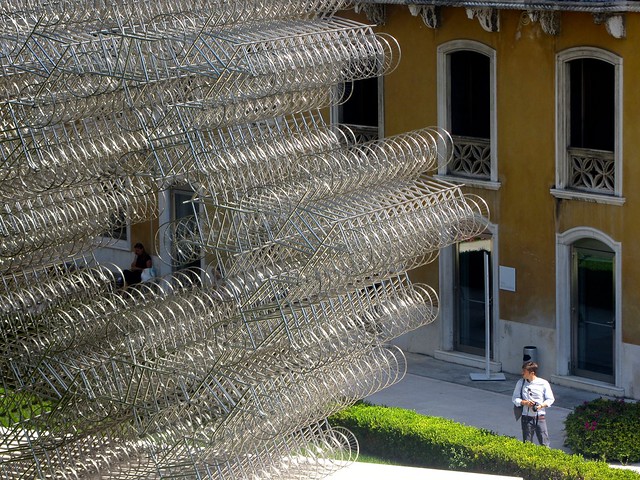 Perhaps this tightness of vista, even in the comparatively spacious Piazza San Marco, is what makes the basilica front so chaotically busy and overly dense with marble and details: 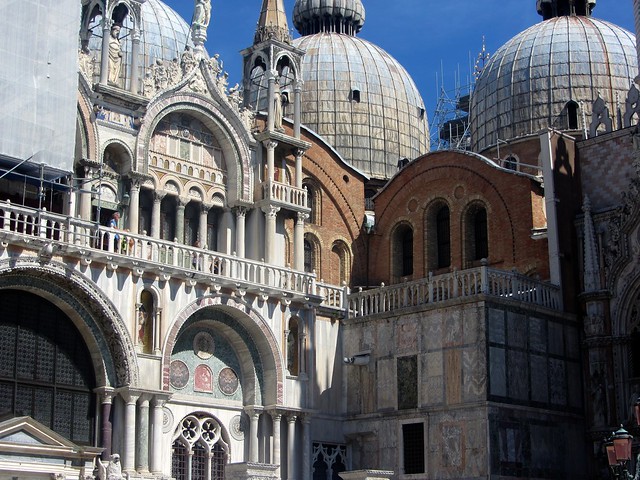 (San Marco's inspiration and rival, Istanbul's Hagia Sophia is, by comparison, set back on its own in a large open area, and seems much less fussy.)

But the best vistas are across the larger bodies of water. The long quay at the south end of the island offers a great view of the slightly insane 19th-century factory-turned-luxury-hotel Molino Stucky. 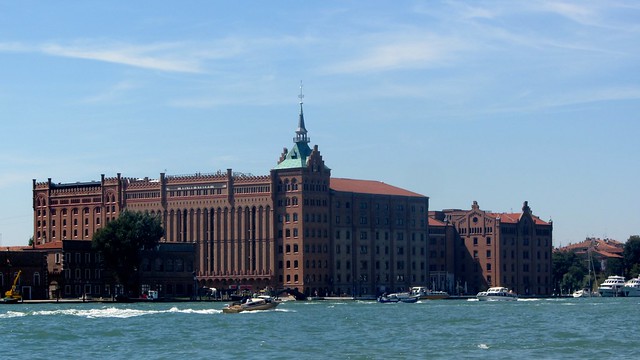 (The Stucky seems to me more like an upstate New York industrialist's version of Italy than an actual building in Venice - but maybe that's just me getting my references backwards?)

If looking across the water is good for vistas, then getting on the water is better. One evening we decided to take the "Vaporetto" (the public water bus) around Venice and along the Grand Canal. We had hoped to do this at dusk but had trouble finding a place to buy tickets, so it was fully night-time by the time we started out. I managed to figure out the low light / long exposure settings for my camera - although long exposures are difficult to take from a moving boat! 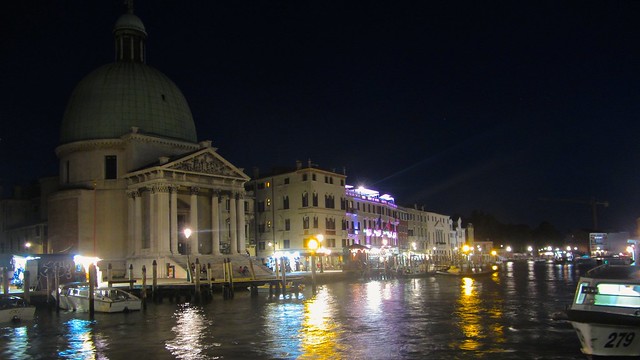 It turns out we had taken the wrong boat - instead of going up the canal, it circled out into the industrial dockyards and eventually deposited us by a carpark, where we had to wait about twenty minutes for the next boat. This gave us a grand view of a futuristic-looking transport station: 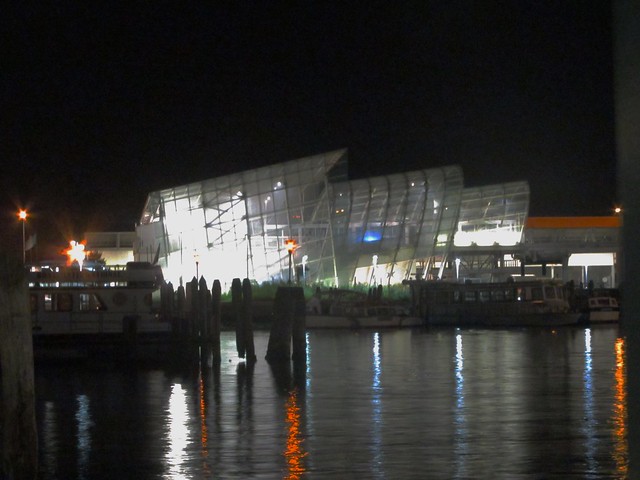 We also had a great view of the giant new ocean liner, the Regal Princess. A third of a kilometre long, with 19 decks, and displacing 142,000 tons, it is perhaps the largest single object in the entire city. We had seen it buzz the Piazza San Marco earlier and now here it was at rest, all lit up. It was a Friday night so we could see the multicolored lights of the onboard disco flashing into the dark. I tried many different camera settings, but all those bright lights are tricky to shoot in the dark: 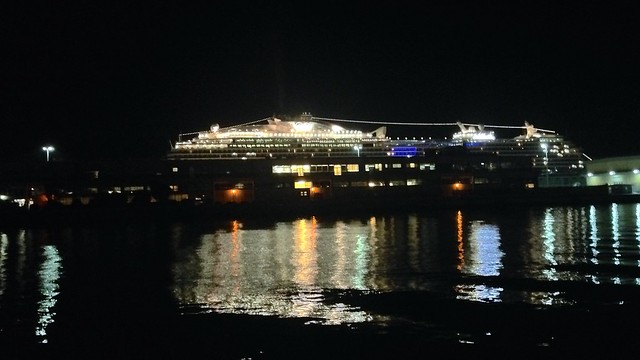 The proper vaporetto finally came and we rode it along the south side of the city and then towards the Grand Canal. The dark night was punctuated by the brightly lit fronts of several giant neoclassical churches. First was Il Redentore, one of the high points of Palladio's career. 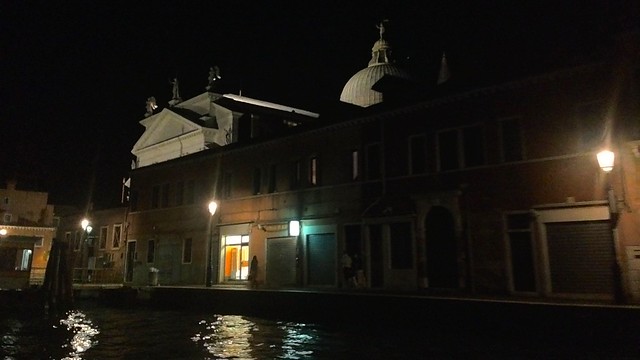 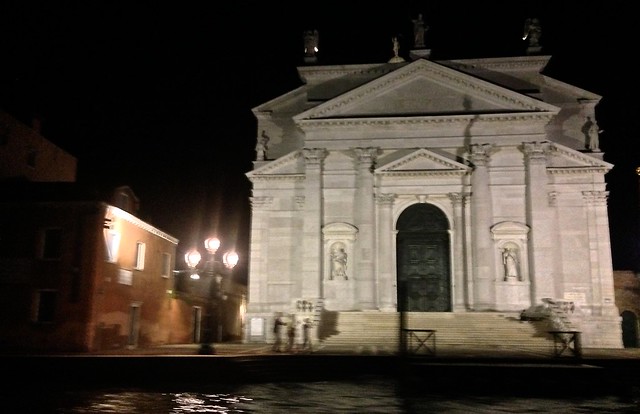 Next was the iconic Church of San Giorgio Maggior, also by Palladio, and quite similar in the geometrical rationality of its front. 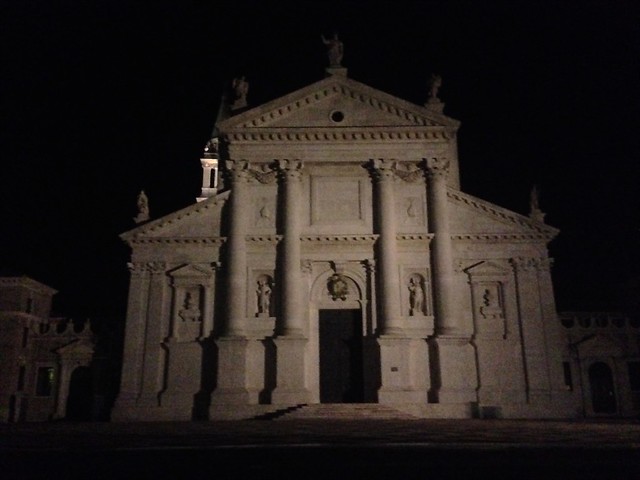 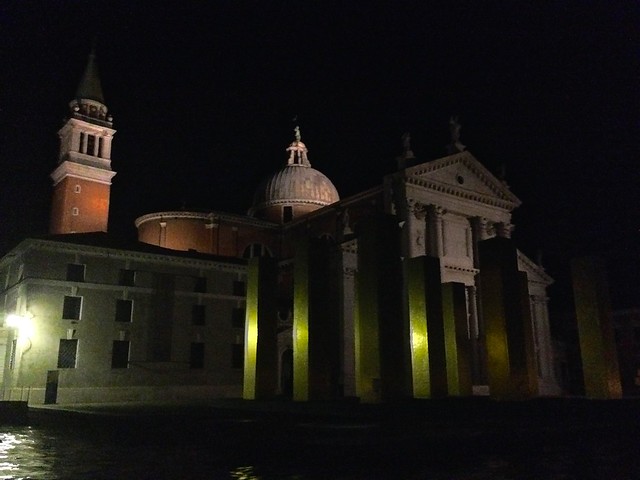 We had spent the earlier part of our time in Venice looking at things through the eyes of John Ruskin. I wondered what he thought of these neoclassical giants towering above his beloved Gothic city?

[It is] impossible to conceive a design more gross, more barbarous, more childish in conception, more servile in plagiarism, more insipid in result, more contemptible under every point of rational regard.

We turned the corner past San Marco and passed close by Santa Maria della Salute. This building was inspired by Palladio's work, but built several decades later, in the middle of the Baroque era, with its oversize features and obsessive decoration - and all those statues! I found myself agreeing a bit with Ruskin - everything about this seems to be a bit much. 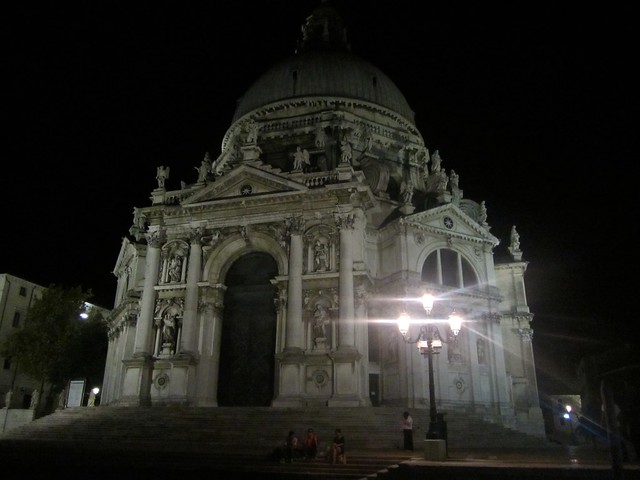 It turns out that Ruskin is somewhat more charitable about this church - in his own way:

An architect trained in the worst schools, and utterly devoid of all meaning or purpose in his work may yet have such natural gift of massing and grouping as will render all his structures effective when seen from a distance: such a gift is very general with the late Italian builders, so that many of the most contemptible edifices in the country have good stage effect so long as we do not approach them.

I do find it interesting how Venice, which is one of the few major cities in Italy to have been founded after the classical period, and so with no original antiquities of its own, has turned to outsize neoclassicism for many of its grandest buildings.

Our vaporetto went up the Grand Canal, which at night is a rather sad sight: it's clear from the very rare scattered lights that many of the large palatial buildings alongside the canal are empty. I gather that this is mainly because, like in so many places like Manhattan and London, the most expensive real estate is now owned as investments by the super-wealthy who rarely if ever actually live there. 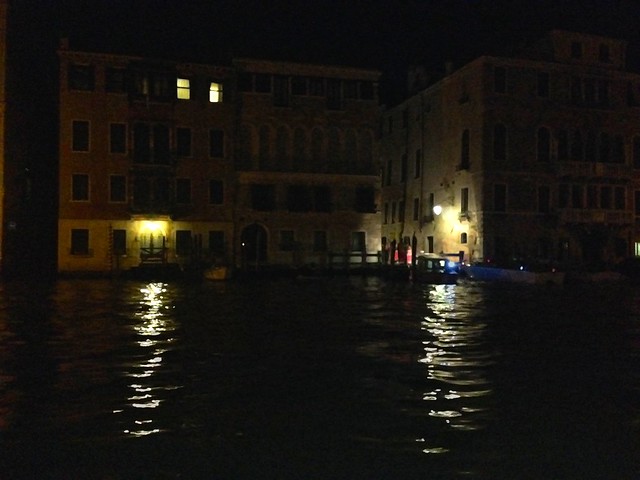 Then we got off the boat and back into the narrow streets with their short viewpoints.