One of my favourite things about being in a new place is to walk around and just get a feel for what it's like to live there. Even the most exotic and spectacular places are just part of the everyday for the inhabitants. They have jobs, buy groceries, and meet up with neighbours.

The problem with Venice is that so much of it feels like a museum or a shrink-wrapped tourist attraction it can hard to find genuine locals, let alone neighbourhoods. They are around, though - you just have to get a bit off of the beaten track.

Around San Marco and the Rialto you will find lots of tourists and lots of restaurants, boutiques, and hotels, but the Cannaregio district, on the northwest side of the city, has genuine locals and genuine neighbourhoods. It isn't quite as flamboyantly scenic as the more popular areas, but it's still definitely Venice, and without the teeming crowds you can take the time to enjoy it more.

While our hotel was just a few blocks north of the Strada Nova's tourist bustle, it was always a refreshing retreat to return to from the huge crowds. The shops around it catered to locals: a grocery store, a vaping accessories shop, a place that sold wine poured into old plastic pop bottles for 2 Euros a litre, and even a movie theatre.

The extreme north-west corner of Venice is the most 'normal-feeling' part of the city. The canals and roads are wider and less maze-like, and they're populated by everyday people in motorboats rather than tourists in gondolas. 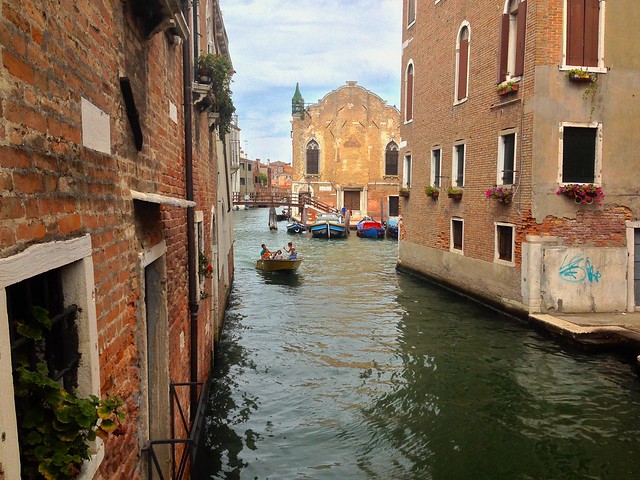 The buildings are often larger, holding many apartments. You can tell how many normal people live in an area by how much laundry is hanging outside to dry. 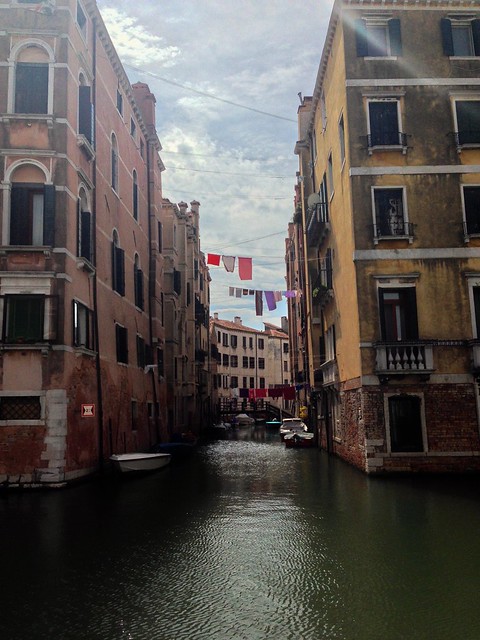 In the mid-afternoon heat, when only tourists would be crazy enough to be out and about, these parts of town are quite empty - almost ominously so. The houses and their lovely flowers help make it feel safer, though. 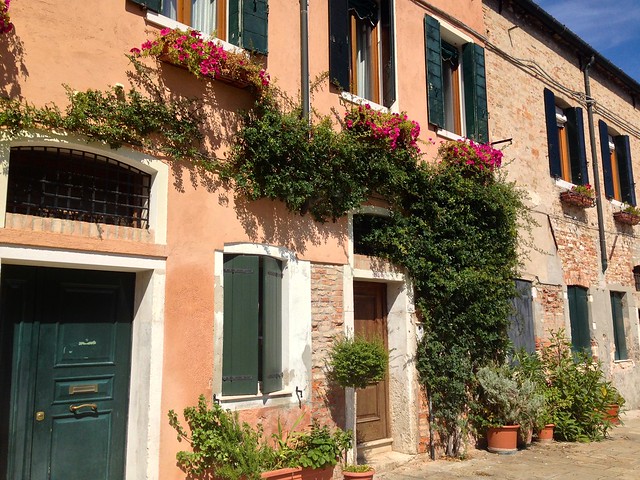 Closer to the train station there is even a large housing development - still quite charming, but distinctly different from the medieval feeling of the rest of the city. 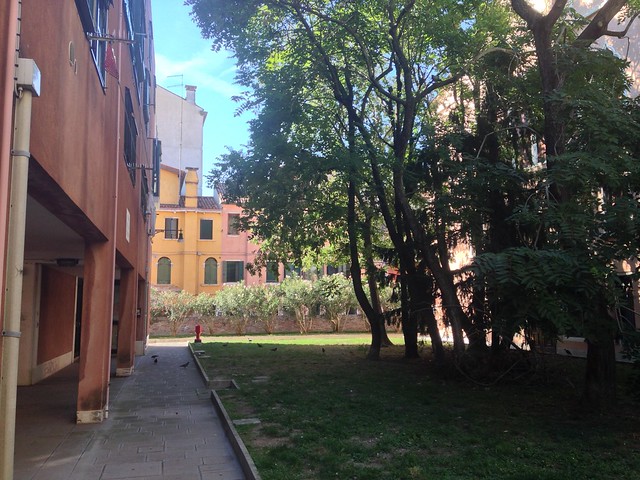 This area could almost be in any other city in southern Europe, but after days of pushing through hordes of tourists in narrow medieval alleyways clogged with novelty mask shops, some generic-but-cheerful housing and a spot of tree-shaded grass felt like an oasis.

Further north the concept of "neighbourhood" gets more specific with the site of the original Ghetto, the official Jewish district of Venice. Unlike so many places that would share the name later, this ghetto seems pleasant and well-off. 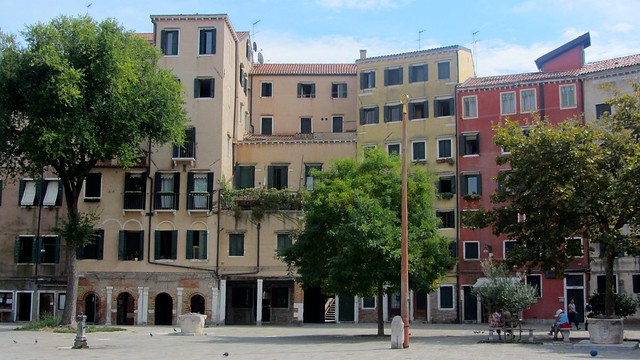 From the early sixteenth century until Napoleon took over in 1797, all Jews in Venice had to live in this district - the gates were even locked every night. The ghetto's Jewish culture was vibrant, though, and they became important in the larger Venetian context. The main square has some lovely buildings: 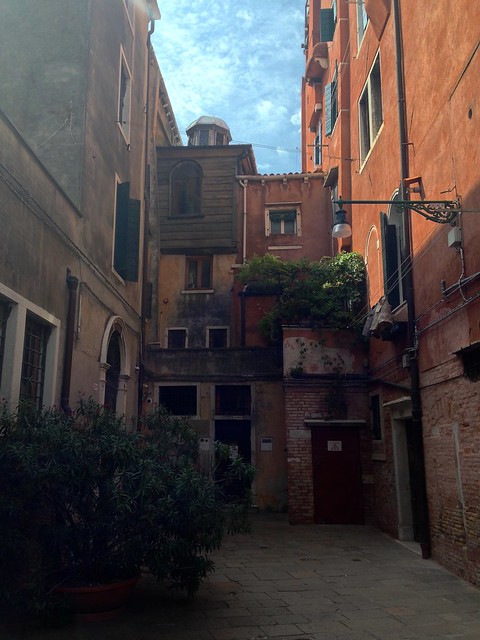 There is also a synagogue / museum. 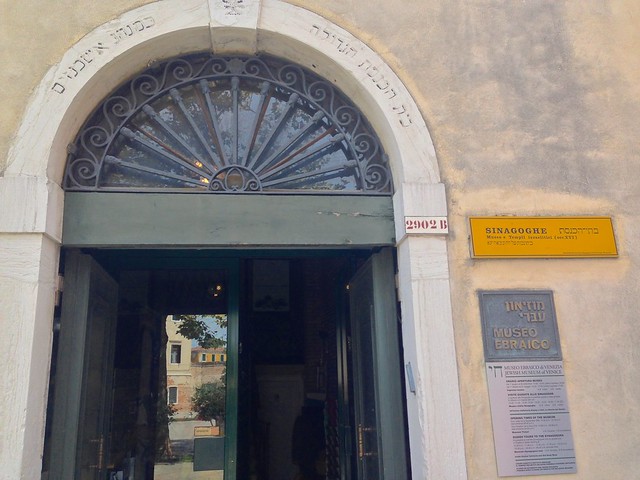 There are shops selling glass menorahs and such, as well as a restaurant and patio (which only serves pizza and pasta like every other restaurant in town - feels like a lot opportunity there.)

The ghetto was the vibrant heart of Venice's Jewish community - until 1944. A back corner of the square features barbed wire and memorial plaques. 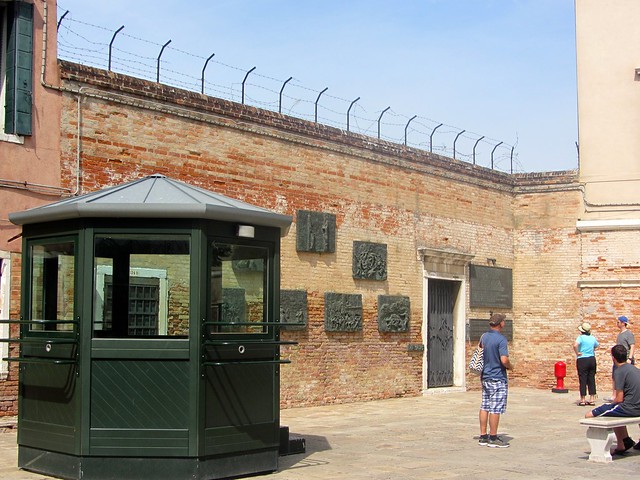 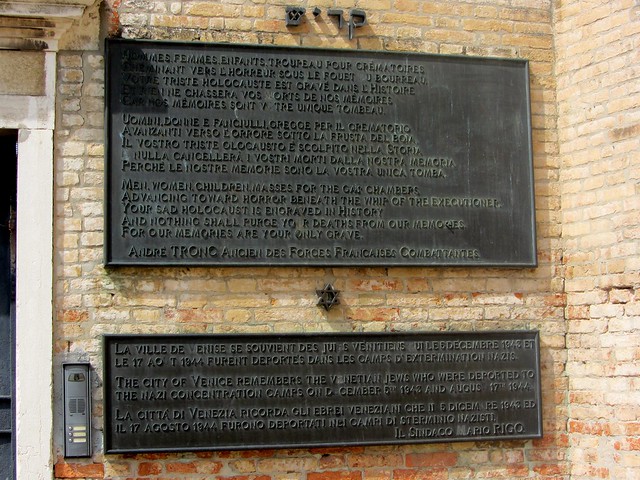 Thankfully, some people have been coming back. According to Wikipedia, Venice is currently home to about a thousand Jews, with about a third of them living in the old Ghetto area.

After the grim reality check, it was almost reassuring to return to the distractions of the mobs of tourists along the Strada Nova. 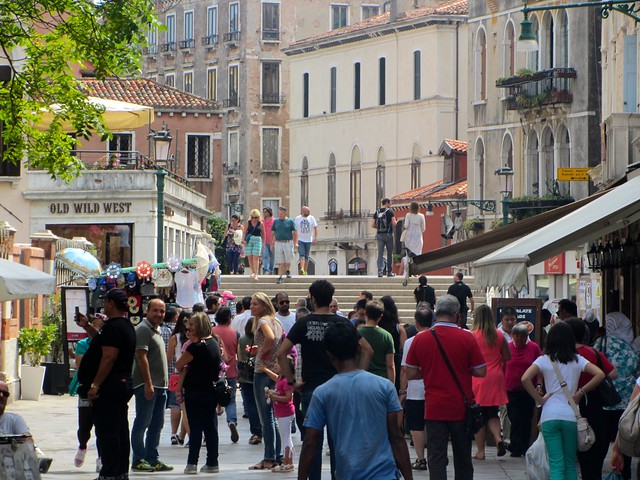