After several days of travel, we had finally arrived in Venice. The small airport was crowded with flights, so we had to take a bus in from the plane to the terminal. We got our bags and had our first hike with them, along the surprisingly long footpath from the airport to the water-bus pier. Soon we were on the cloudy waters of the lagoon and slowly making our way to Venice. 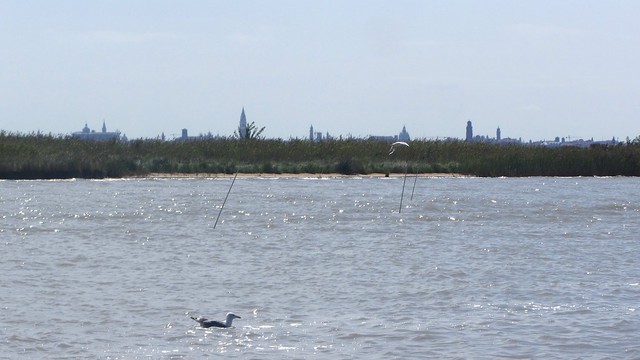 We had both been browsing through Ruskin’s “The Stones of Venice” on our way here, and the initially underwhelming but still somehow thrilling initial view of the city by water reminded me of this passage early on in the book:

Not but that the aspect of the city itself was generally the source of some slight disappointment, for, seen in this direction, its buildings are far less characteristic than those of the other great towns of Italy; but this inferiority was partly disguised by distance, and more than atoned for by the strange rising of its walls and towers out of the midst, as it seemed, of the deep sea, for it was impossible that the mind or the eye could at once comprehend the shallowness of the vast sheet of water which stretched away in leagues of rippling lustre to the north and south, or trace the narrow line of islets bounding it to the east. The salt breeze, the white moaning sea-birds, the masses of black weed separating and disappearing gradually, in knots of heaving shoal, under the advance of the steady tide, all proclaimed it to be indeed the ocean on whose bosom the great city rested so calmly;

We got off the water bus and walked to our hotel. Immediately we were struck by the uniqueness of this urban experience: it’s all built for pedestrians. The streets never had to be wide enough for automobiles, or even carts. Sometimes we crossed wide plazas, other times we squeezed through narrow alleyways. Every few blocks we had to take a narrow footbridge, often with carved stone steps, across a small canal. 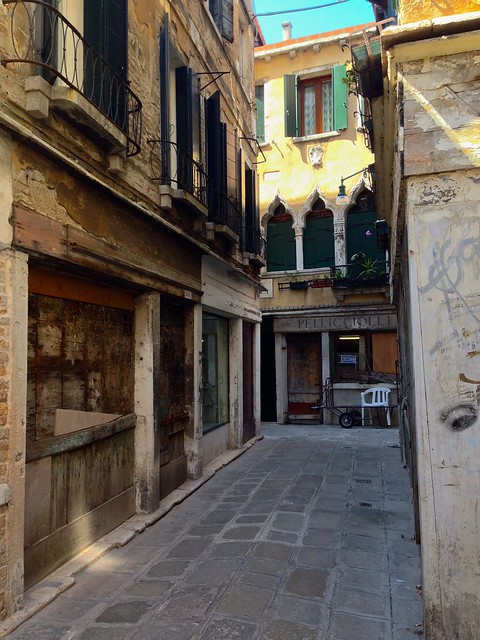 We were staying in the ‘annex’ of the The Hotel Bernardi Semenzato, which was a bit north of the most touristy areas. In fact, the surrounding area felt like a real neighbourhood, where people actually lived. If we turned left from the entrance, there was a grocery store around the corner, and even a small movie theatre nearby. It felt almost normal - but if we turned to the right, we saw this: 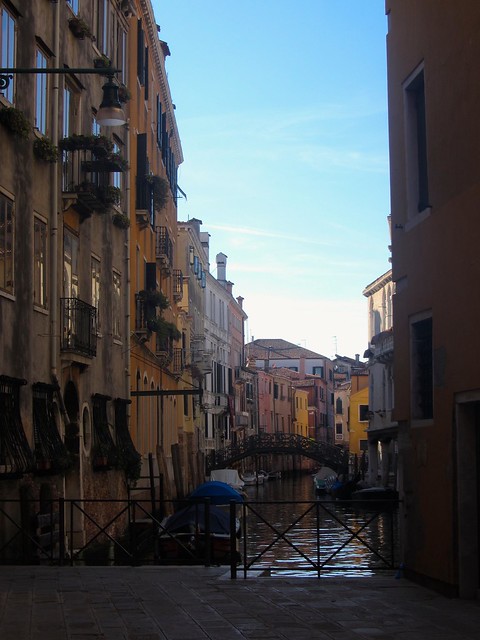 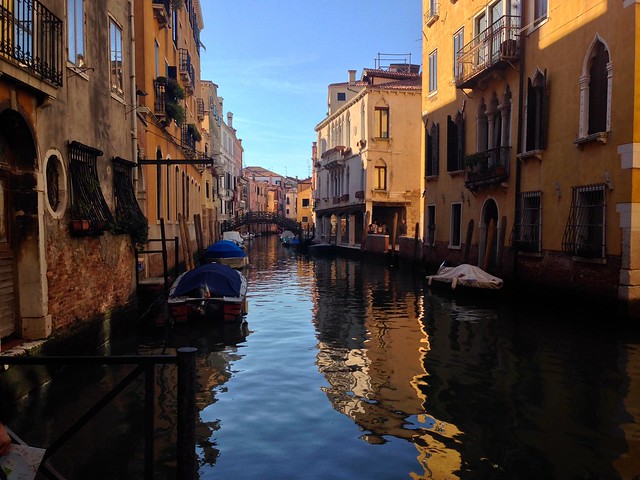 We had a long overdue nap for a few hours and then decided to wander around a bit, get our bearings, and find a place for dinner. The sun was just beginning to go down, bringing out the amazing textures and shapes of Venice. We were still a bit dazed from our travels, which only enhanced the magical fairy-tale feeling. 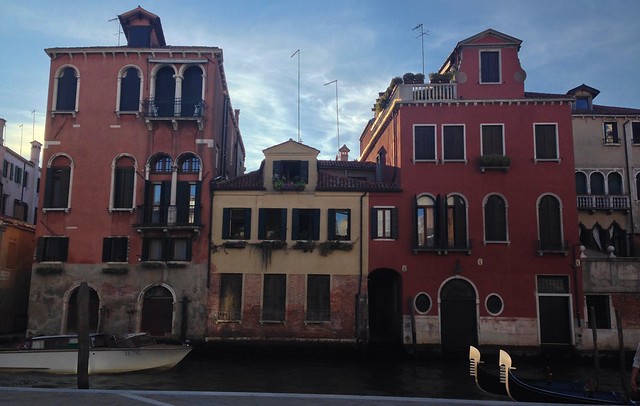 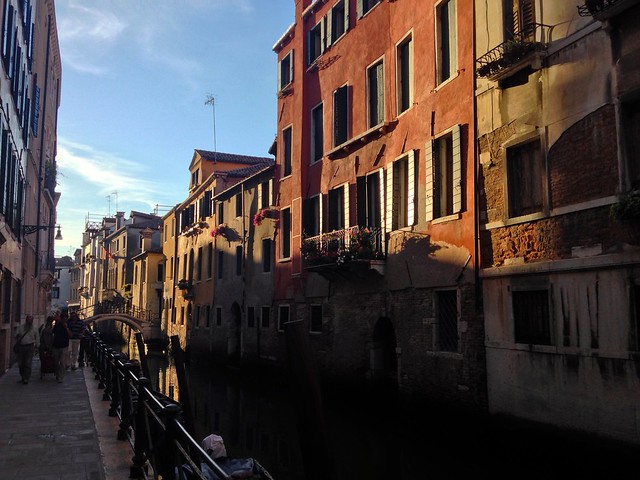 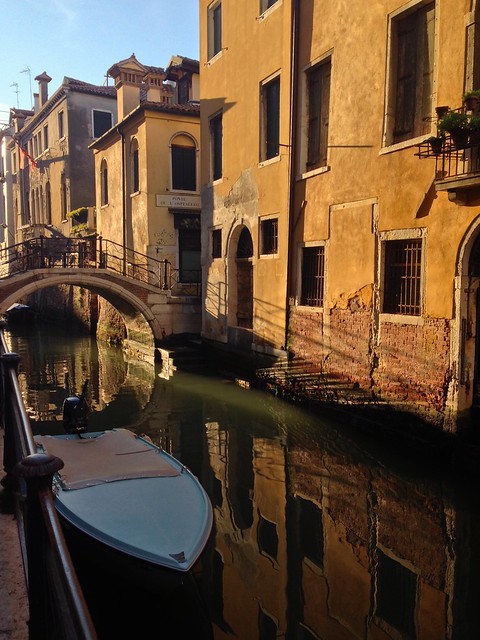 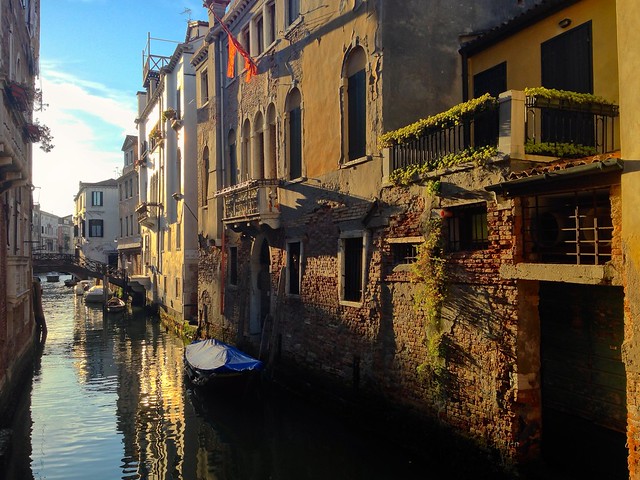 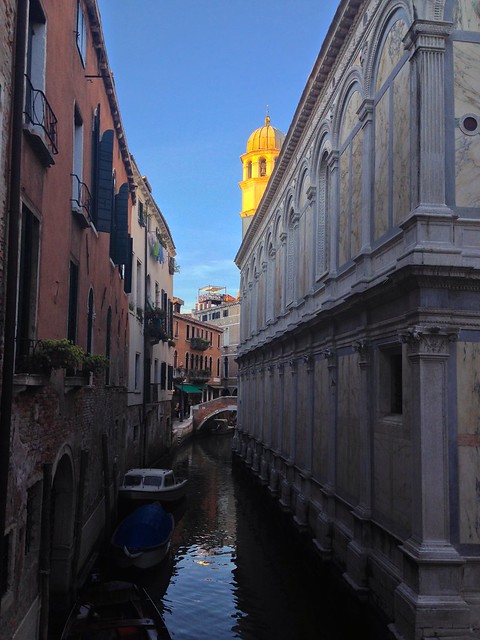 We had found ourselves outside the pretty marble-clad (and recently restored at great expense) Santa Maria dei Miracoli church. There was a square nearby with a number of restaurants and patios. New in town and exhausted, we were unlikely to be find the perfect charming local restaurant, so we settled on a pleasant-if-touristy place with lots of patio seating and a good view. 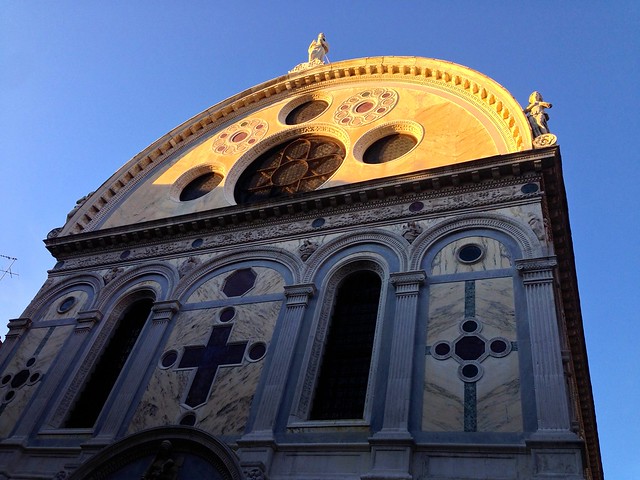 Shannon had gnocchi, I had spaghetti with squid and ink, and we shared a bottle of rosé. 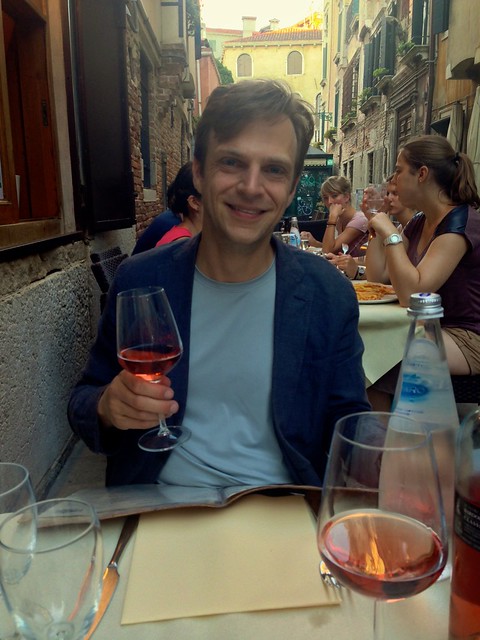 We watched the lively street life on this simple square - people walking dogs, couples chatting, children playing, and lots and lots of tourists out on patios eating and drinking - and thought about how much Jane Jacobs and Christopher Alexander would probably like this place, with its variety of uses and sensible human scale. 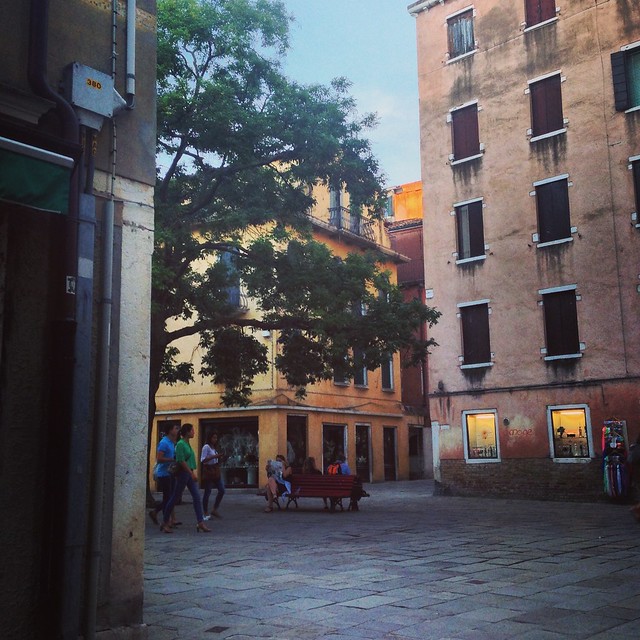 Night had fallen by the time we finished dessert, and at first we boldly eschewed maps or mobile GPS devices, but we soon ended up lost in a maze-like warren of little passages, some surprisingly narrow. 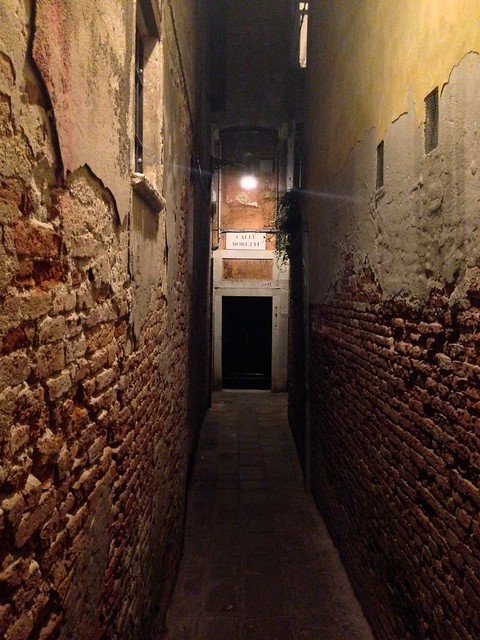 We were so used to modern cities with their regular grid-like streets and ample space for pedestrians and cars, and more importantly clear views of the surrounding area, that we weren’t very well equipped to navigate this much older way of building things. 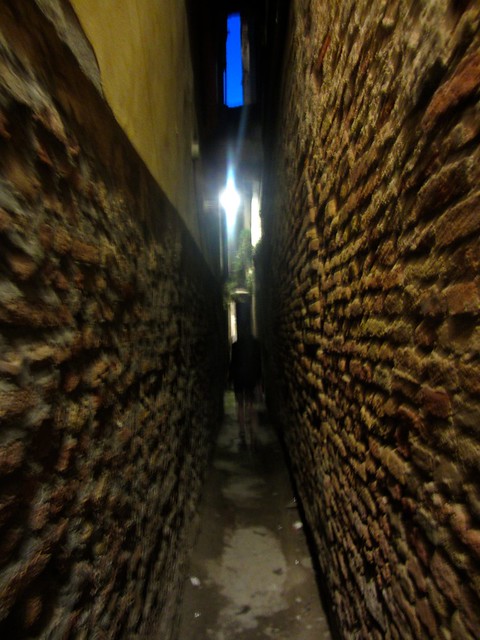 After several bouts of trying different routes but returning to the same wrong place, we finally got our bearings and made it back to the hotel and to a deep deep sleep.