Our trip hadn’t started very well. Our Montreal-Brussels flight had been cancelled and the replacement flight wasn’t until the following evening. We made the best of it though. We had a relaxing morning in the hotel (the Holiday Inn Pointe Claire has a good buffet). We had lots of time to kill between hotel check-out and our flight, and so we spent much of it in the stylish restaurant of the airport Marriott. My brother-in-law was even able to make it out to join us. 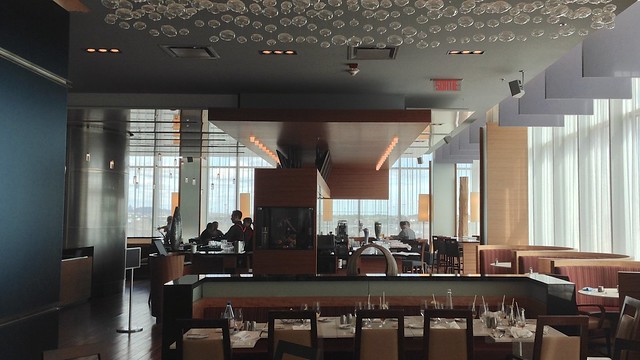 Today’s flight was at 5:30pm and this time it wasn’t delayed. We were (finally!) on our way to Europe. 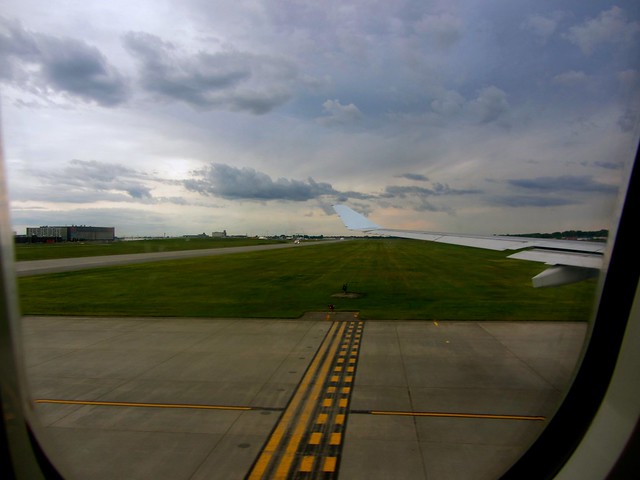 It was an overnight flight over the North Atlantic, and it was overcast much of the way, so there wasn’t much to see from the window. I love airplanes and know intellectually how safe flying is, but there’s a part of my brain that’s always waiting for disaster to strike - this and the awkward seating keeps me from being able to sleep on planes. I watched some movies and read a bit, but mostly found myself playing the original Final Fantasy on my iPhone. It took me back to my teenage days playing Ultima and made the hours just roll past.

Eventually I could see the lights of Ireland below, with Dublin being a particularly prominent glowing “V” on the horizon. It was too cloudy to see much of England, but the sun rose just as we came in over the industrial shorelines of Antwerp: 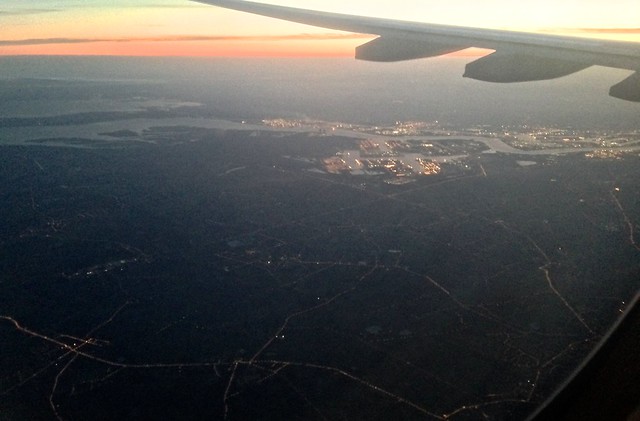 Soon we were descending over rural Belgium, with early dawn shining over perfect little villages and cozy-looking fields. 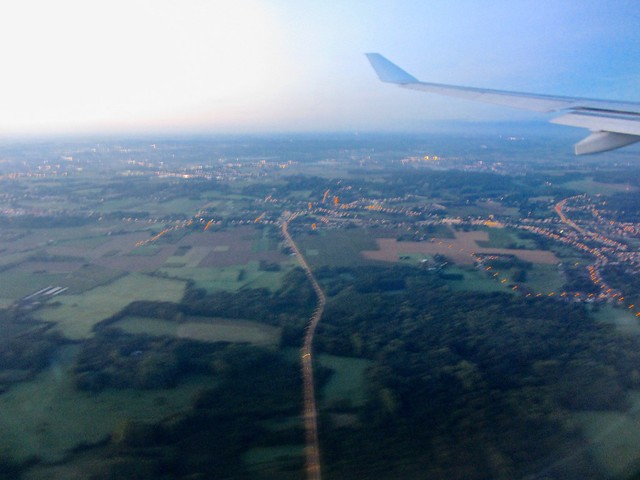 Our seats were in the very back of the airplane, so we were among the very last people into the airport. The arrivals area of Brussels airport is a giant long low-ceilinged corridor, mostly empty, and our gate was at the very farthest end of it. It all felt very much like something from a Stanley Kubrick film. 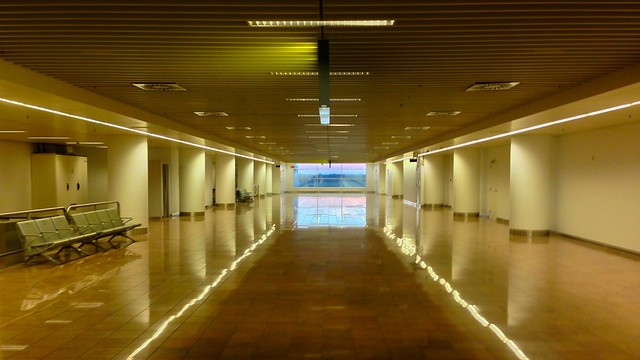 Eventually we saw other gates and some advertising. making it seem less bleak. Much of this advertising, though, was for World War I centennial commemorations, since so much of that war was fought nearby. There were also several art installations, such as a field of poppies sprouting upside-down above our moving sidewalk. 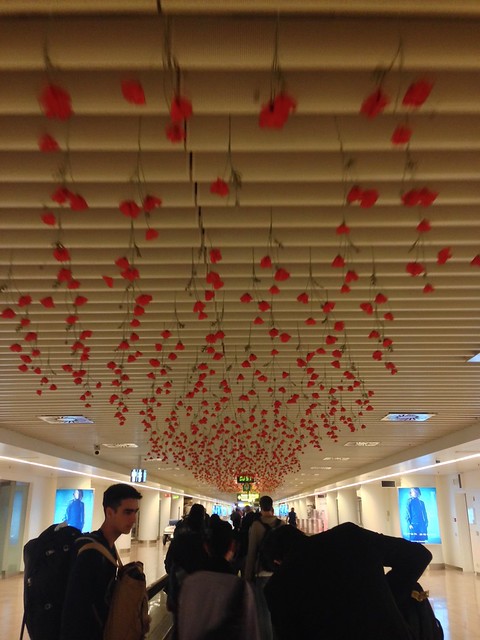 The memorials were powerful and affecting, especially since I was under-slept and worn out. Reading about the Student’s Cemetary and such started making me a bit weepy.

It was barely 7am and our original schedule had our flight to Venice leaving around 2pm. We had planned to perhaps take a bus into town and see some of Brussels, but since our flight had arrived so much earlier, the helpful Brussels Air staff were able to rebook us on a 9:30am flight. This gave us back half a day of our vacation, but our layover was suddenly much shorter. We found a café and had some desperately needed coffee. Our table had a great view of the tarmac. A small rainstorm passed by, and I caught some planes taking off through rainbows: 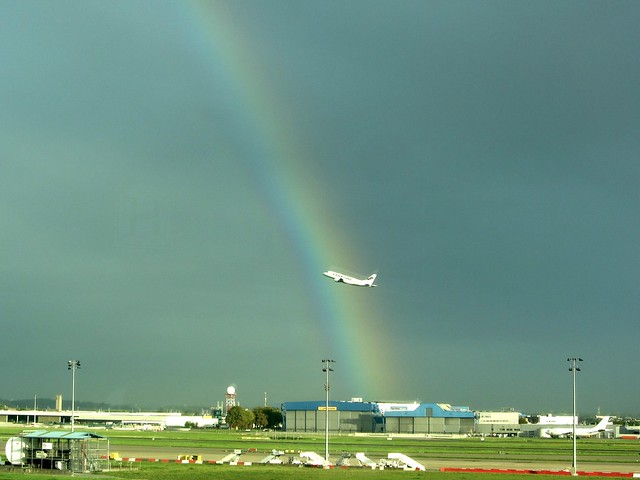 I posted a version of that picture on Instagram and it got picked up by the Brussels Airport Twitter account, who gave it a smily and retweeted it to all 17,500 of their followers, setting off other retweets and favouritings:

Every so often I’m reminded that this is the 21st century. Fame is fine-grained and dished out in little unexpected bursts.

Besides the generally low ceilings, which for some reason made me think of 90s-vintage FPS levels, the other thing I noticed most about the Brussels airport is how quiet everybody was. Even after the crowds arrived and the terminal filled with bustle, it was murmuring bustle.

We made our way to the Departures area to find our gate. Departures is another long hallway, clearly just a level up from the long low hallway of Arrivals - but it’s completely different: 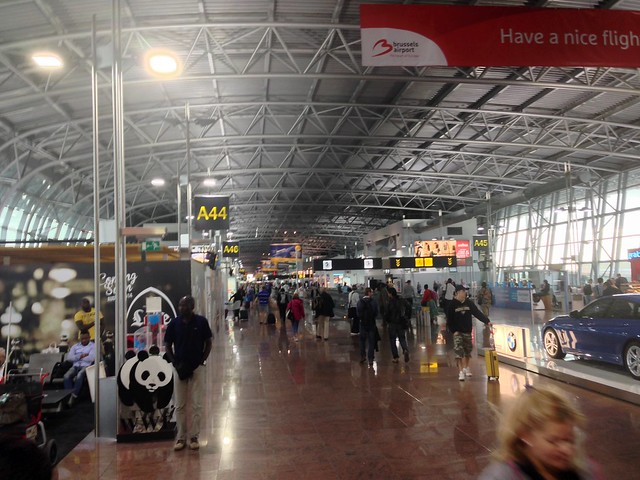 The plane was a type that I had never seen before: a small with very high wings swept downward and four small jet engines. It turned out to be an Avro RJ. Our flight took us directly over Brussels, giving us a spectacular view of downtown: 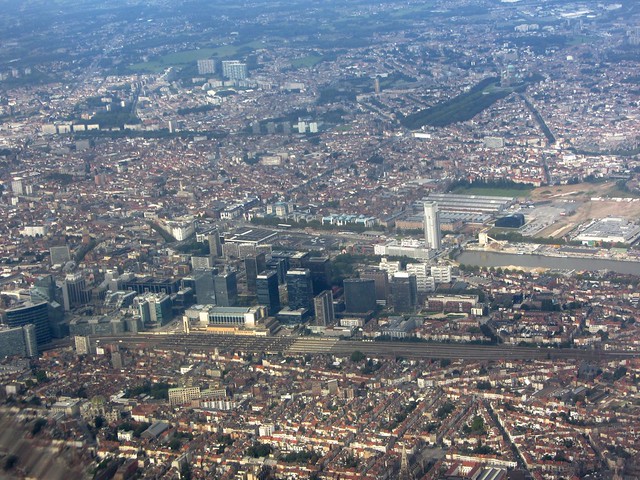 (click on that picture to see it in full size - it’s full of zoomable details).

Soon we were over the European countryside, scattered about with towns and farms and rivers. Then in the distance what I thought had been clouds turned out to be our first view of the Alps: 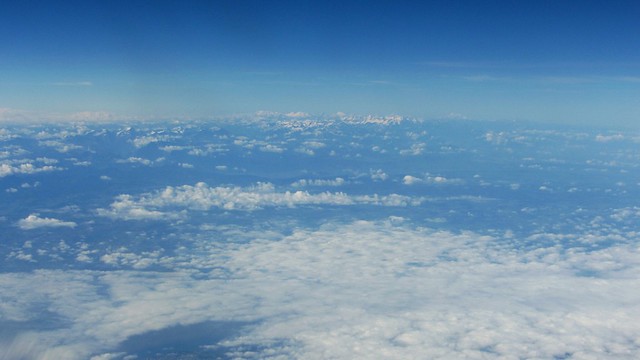 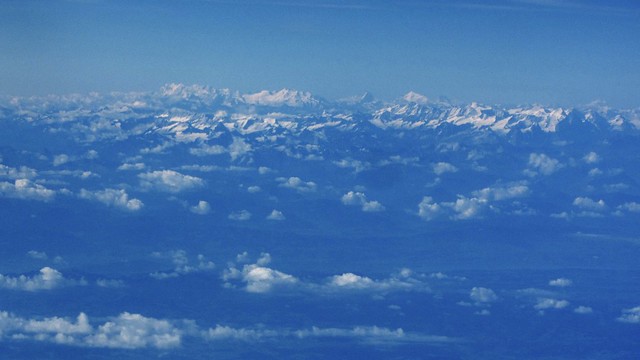 Soon I could see mountains directly below us as well. 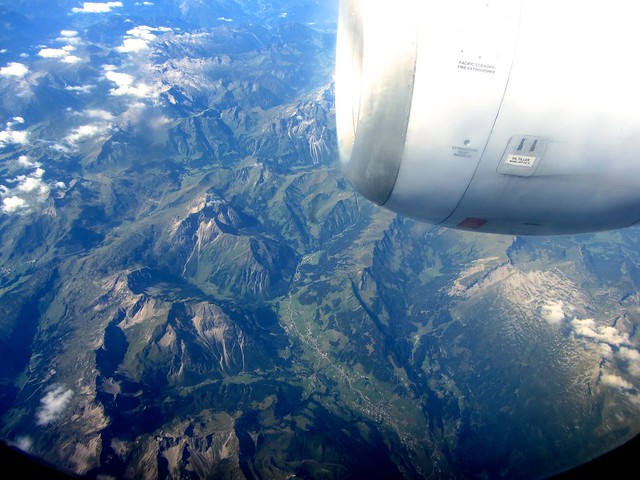 My zoom lens got a solid workout, at least until the camera’s battery started to die. 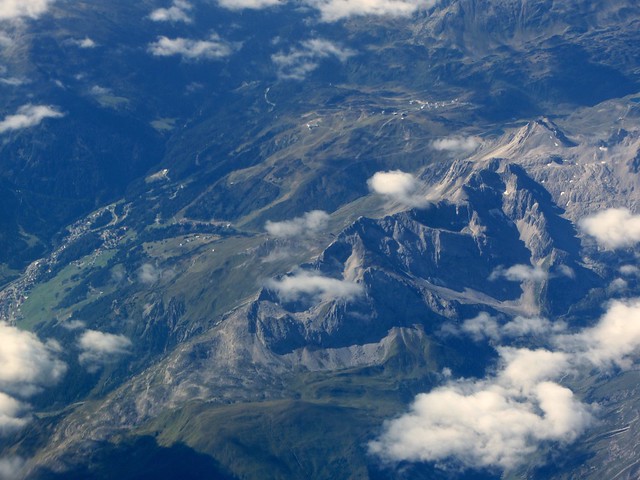 I like how in the European alps the rugged peaks are interspersed with cozy-looking towns and lush farmland. 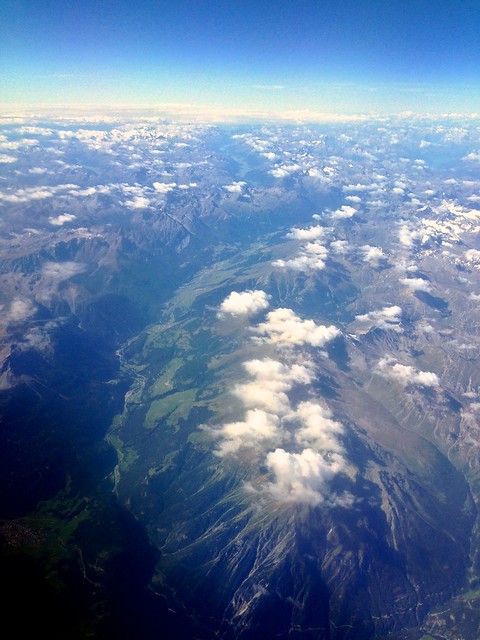 But even though European civilization has been building here for thousands of years, some parts of the Alps still seem to be empty and untouched. 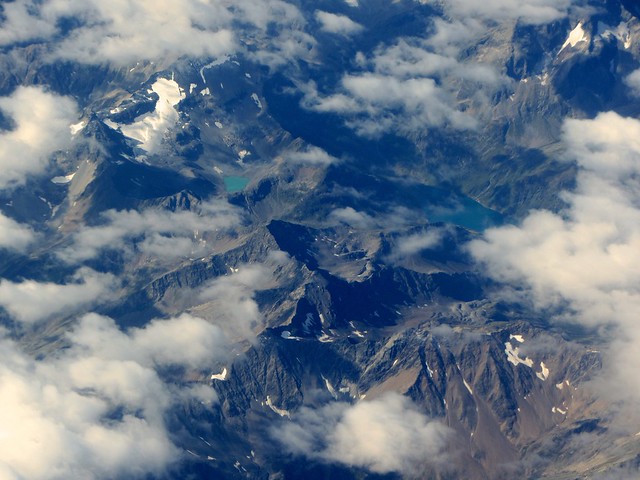 Even in late August, some peaks still had snow: 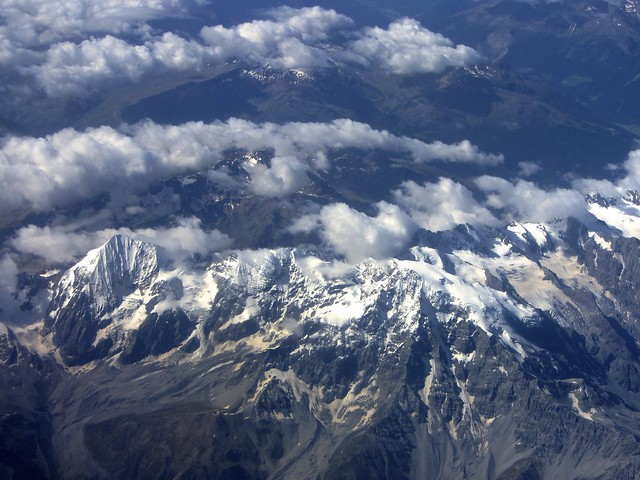 Then we had cloud cover for a while - and when it cleared, I had a sweeping view of what was clearly Italy and what was even more clearly the Venice lagoon. 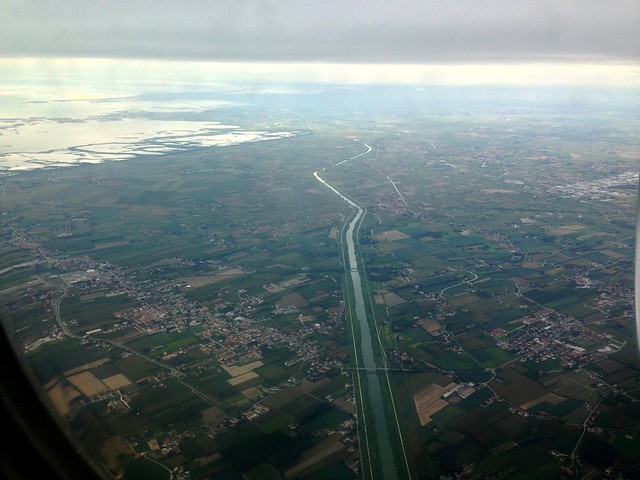 If you ever fly into Venice airport, try to get a window seat on the right side. You will be rewarded with some spectacular landing views. The lagoon and its various feeder canals are fascinating, but the marshes really catch the eye with their fractal inlets: 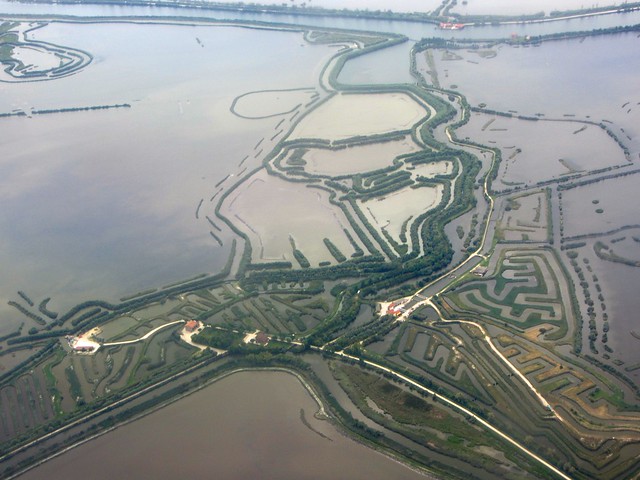 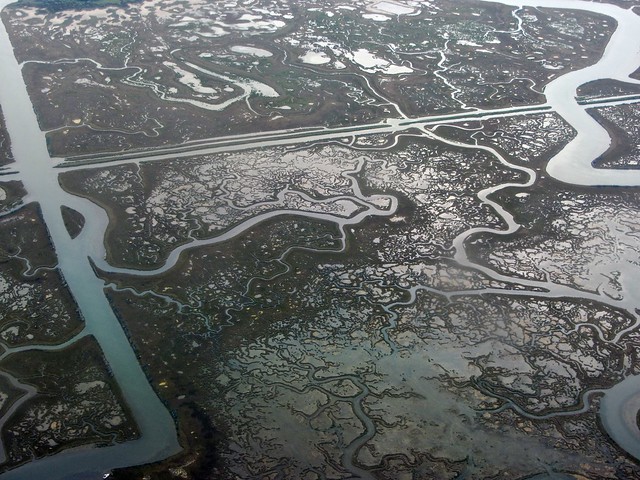 Final approach gave us an amazing close-up view of the city of Venice itself. 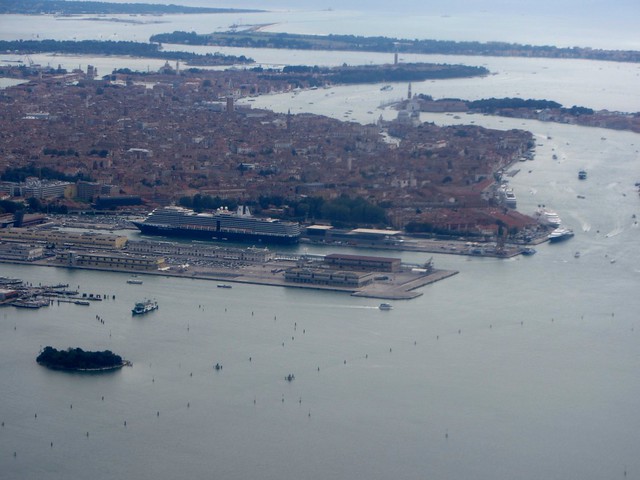 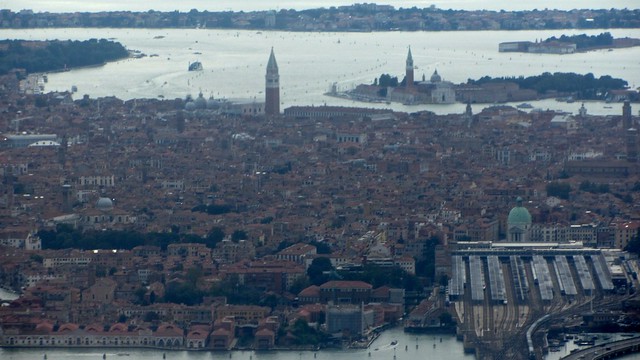 It had been two long days, but clearly we had finally made it. Our holiday trip had truly begun.