Big news around Nova Scotia is the big push to have the Halifax Shipyards selected as the main site for the Federal Government's National Shipboard Procurement Strategy. If Halifax is chosen, it could mean an additional $30 billion in the local economy over 30 years.

One of the key elements of this push is a website called shipsstarthere.ca. It's a great name, but I'd often joke with work colleagues over lunch about novelty sites we could set up with riffs it.

A few weeks ago, as I was about to go to bed early after a long day of work, I discovered on Twitter that someone had registered shitstartshere.ca - so instead of going to sleep, I stayed up until about 2am and set up starshipsstarthere.ca as a simple one-page site on my own server, with a cheeky mash-up of the view of downtown Halifax from the Citadel and a shot of the Space Shuttle Atlantis launching: 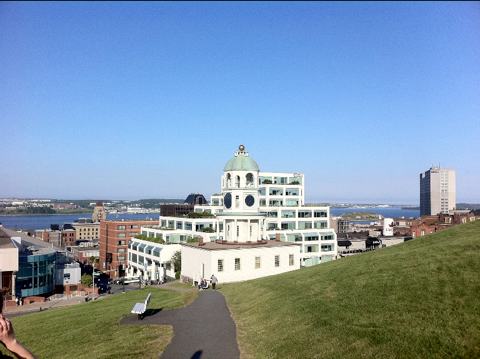 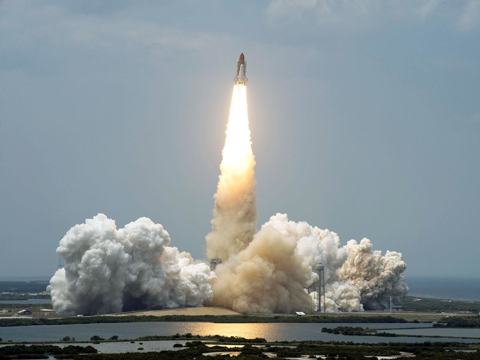 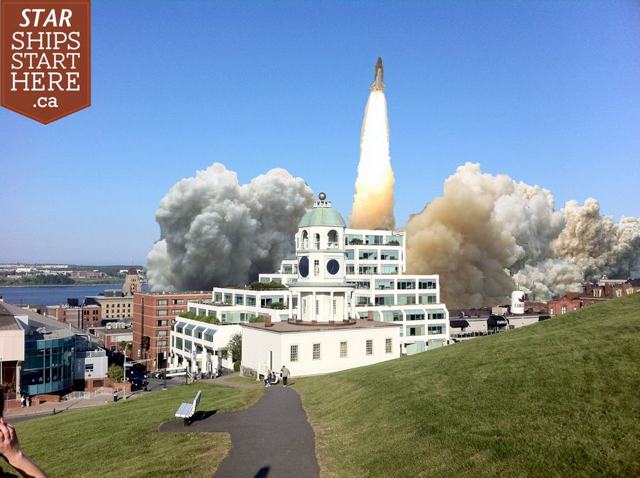 Over the Labour Day weekend, I expanded the site to be a full Rails app with a half-dozen pictures and a slide show on the front page. I started getting the word out, and it went viral - at least in Halifax. In just a few days the site has already had over 1000 visits, and more Facebook "Like"s than my iPad app Remembary has gathered in six months.

This site lets me combine two of my favourite things: I moved to Halifax three years ago and am still discovering how awesome Nova Scotia is. Also, I was always "that weird spaceship kid" when I was growing up, and I still enjoy sites like ConceptShips.

My Photoshop skills are pretty basic (actually, I'm using Pixelmator), but mashing up science fiction with Nova Scotia's iconic scenery is just too much fun. Other people are enjoying it too: I've been getting a steady stream of really great submissions at starships@shindigital.com. I haven't been excited by seeing new email in my inbox since the 1990s.

So, is it a parody? Only gently so. Personally, I think the Ships Start Here is a good idea. This part of the country has a history of government investment in random projects that are supposed to "revitalize" the area, but which don't really fit: hydroponic cucumber farms, Bricklin automobiles, and so forth. Shipbuilding is something that we already do here - so this project makes sense. Also, it's no pointless make-work project, since there is a requirement to build more ships. Why not do it here?

The site is still growing and changing. I'm planning to add a new picture every day - I already have enough material for several weeks, and more is arriving all the time. Drop me a line and let me know what you think - or submit your own picture.