This is part 4 of a series of blog posts describing my trip from Fairbanks Alaska to my great-grandfather's research cabin on Flaxman Island.


We left the mountains behind and headed out across the tundra. From the air, the tundra in summer looks like a vast treeless gently rolling plain, bright green and criss-crossed by rivers. Occasionally we would see patches of geometrical shapes, right-angled squares and worm-like squiggly lines. My great-grandfather had done some research on these - supposedly they're a side-effect of melting processes in the permafrost. Whatever they are, they make for great photographs (and maybe computer desktop backgrounds). My mother, unfortunately, got air-sick, so we landed on a strip near the delta of the Canning River to recuperate. Shortly after I got out of the plane I discovered the famous tundra mosquitos. They swarm thickly around anyone within seconds - explorers like John Franklin described the agony of spending weeks surrounded by these annoying bugs. 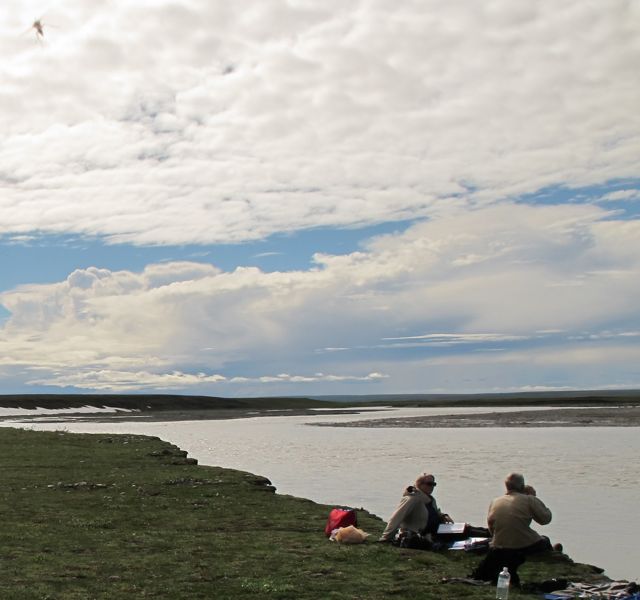 I've always wondered why there are so many mosquitos so far north where the only blood source seemed to be a few cute ground squirrels - and then I saw the reason: just across the river from us was a large herd of caribou.

Thankfully, we had lots of DEET available to keep the mosquitos from biting us - and we soon got used to having a cloud of them around our heads.

After a bit of lunch we took off again and headed north to Flaxman Island. Right around this time the battery on my old Canon PowerShot SD400 camera died (after only 300 pictures and ten minutes of video!). Kirk and Janet let me use their cameras - luckily both Canons, so I only had to swap in my SD card. We got to Flaxman Island, just a few miles off the north shore of the continent, only to find it covered in fog. We flew low over the campsite but couldn't really see anything, and certainly couldn't find a place to land. So we returned to the riverside landing strip (passing the caribou herd on the way) and waited a little while to see if the fog would clear. I took some pictures of the local wildlife while waiting. When we returned to Flaxman Island, the fog banks had pulled back, and we had a great view of the whole place. Leffingwell's main cabin, made from the salvaged tropical hardwood of his ice-damaged ship, "The Duchess of Bedford" was still there, but falling apart, roofless - all things considered, pretty good for a century of arctic weather and other visitors. We even managed to startle a wayward caribou who had been hiding out inside.

We had originally hoped to land on the shore near the cabin and walk up to it - but there had been major erosion along the beachfront, and the beach itself was crowded with driftwood logs. So we circled around and found some available landing space on a long sand spit on the other side of the island, about a mile away. Kirk came in at a sharp angle and landed the Cessna on what seemed to me to be the only hundred yards of clear beach on the island.

We had arrived at Flaxman Island. We had taken about four hours to get there, including stops. It had taken my great-grandfather almost half a year.

Here's what it was like on the island itself.