Heathrow Airport: You Are In A Maze Of Twisty Little Passages, All Different
Posted on: 2010-06-27

I'm doing a lot of travelling this month, going to Istanbul, Berlin, Edinburgh, and the North Slope of Alaska. I'll be blogging about it here. The first few posts are about getting to Istanbul.

Air Canada, along with many other foreign airlines, gets to use Heathrow Terminal 1. It is a warren of little twisty tunnels, all different. Long passageways end abruptly at plywood doors. Signs point madly off in all directions at once. The shuttle bus to Terminal 3 goes through a maze of service roads, tunnels, luggage storage warehouses, towers of scaffolding, bits of unused tarmac, and demolition sites - and ends up just a hundred meters or so from where it started. Raw concrete and ducts like something out of Terry Gilliam's "Brazil" are punctuated by shining modern grey steel and glass hallways with flat panel screens and would-be-elegant-if-they-were-open cafes and martini lounges. A third of the terminal complex is being demolished, another third is being rebuilt, and the rest is cobbled together from spare pieces of Brutalism and looks like an old Doctor Who set. 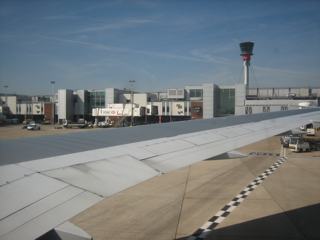 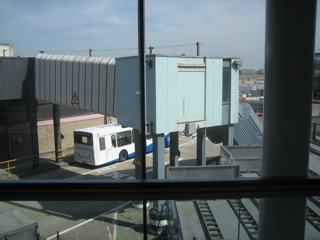 One would hope that this is a temporary state of affairs, but I last went through Heathrow two years ago on my way to Poland, and it seems even worse now than it was then.

British airports make everyone wait together in a large shopping mall area with Duty Free shops, high-end boutiques like Gucci and Burberry, overpriced bars and restaurants, and not quite enough seating. Several large display screens show the flights but not the gate - you have to wait until roughly fifteen minutes before the flight leaves for the gate number to show up on the screen - it is rarely announced over the PA so you have to keep getting up and re-checking the board - and then you and all 200 of your fellow passengers race down a new maze of hallways to get to an undersized secured room where you get to wait again to board.

When we finally took off I saw four giant new terminals at the other end of Heathrow, shining like a vision of a clean, efficient, stylish future. But those seem to be exclusively for British Airways.

I also saw - docked at another jury-rigged corner of the old terminal, not one but two massive double-decker Airbus A380s, one from Singapore Airlines, another from Qantas. It must be quite a shock to emerge from the state-of-the-art comfort of the first class suites on these planes (complete with showers!) to the ad-hoc mess of the old Heathrow.