There are two kinds of blogs on the internet: the kind that don't post pictures of cats, and those that do. Today andrewburke.ca has become one of the second type. Technical discussions and random rants about technology and culture will resume shortly, but by popular demand here are some pictures (and video) of our new cats Wednesday and Pudge.

Wednesday is smaller, more energetic, and has a slightly sunken right eye. She's named for Wotan, the one-eyed grey wanderer from the Ring Cycle (and inspiration for Gandalf) - whose name gives us the day in the middle of the week, and who shows up as 'Wednesday' in Neil Gaiman's American Gods. It's only confusing when trying to schedule vet appointments: "So Wednesday is coming in on Tuesday and Thursday".

Pudge is, as you can guess, somewhat rotund. Her official name is 'Freddymercury' since Shannon and I like Queen and "The Show Must Go On" was playing when we were figuring out their names.

Just after they started getting used to the apartment, we discovered eye infections in both cats, so we've now taken to chasing them around the apartment, pinning them down and putting in eye drops four times a day. This hasn't helped their sense of security. Pudge, in particular, is shy and quiet and a little grumpy and now is even happier with a big collar around her neck. She tends to mope around and tries to solicit sympathy with a glum look. Reminds me of Marvin the Paranoid Android from the Hitch-hiker's Guide to the Galaxy.

They have no interest in catnip or any cat toys or scratching posts that are actually given to them - they much prefer furniture and bluetooth headsets. 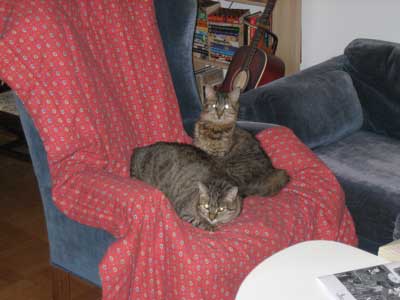 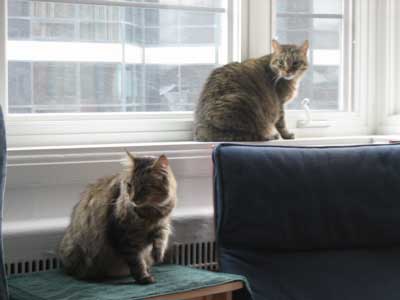 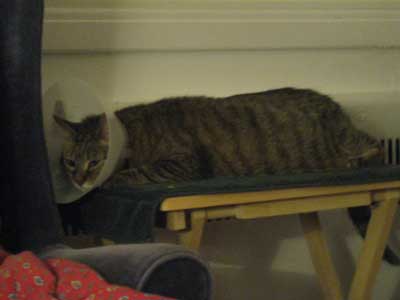 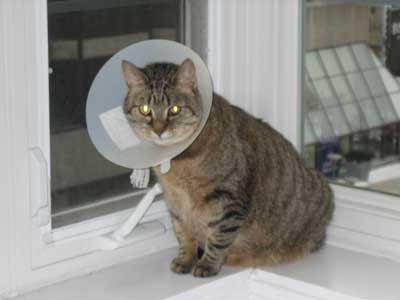 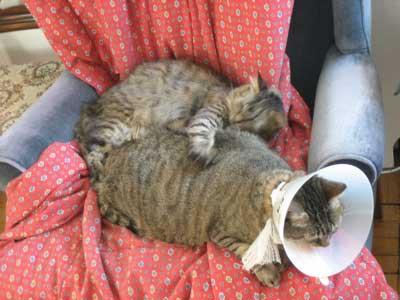 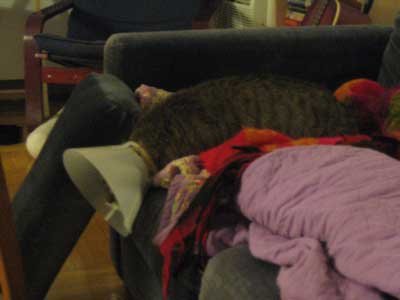 "Don't talk to me about life!"

Here's a video of Wednesday playing with a ball of yarn.
(For some reason my Safari browser wants to download this as raw text, but Mozilla is fine. Right-click to download if you're having problems.)