I've been meaning to do this for a while, but Andrew has inspired me:

After the jump is a screen from Google Earth where I've plotted the coffee shops in my part of downtown Toronto. I'm actually still in California right now, so I'm doing this from memory and may have missed one or two. I drew an arbitrary boundary at Yonge Street and didn't include all the places that weren't chain coffee shops where you could still at least get a decent coffee and sit for a while.

My part of town has a lot of tourists, a lot of condo and apartment dwellers, a lot of offices, a lot of students, and a lot of freelance workers who need to get out of the house (hello!) - this means that I'm a five minute walk from over a dozen coffee shops. On my regular four block walk from my apartment to my mailbox at Bloor & Yonge I pass 4 Timothy's shops, 2 Starbuck's, 2 Tim Horton's, and a CroissantTree.

Timothy's and Starbuck's seem to be the main contenders in this area - new Starbucks locations seem to pop up like mushrooms, pre-populated with a half-dozen of the LiP (Latte, iPod, and PowerBook) crowd. Although a bit of a LiP myself (I prefer straight-up coffee rather than latte and don't like to listen to my iPod when in a coffee shop - I enjoy the overheard conversations too much), I don't really like Starbuck's. I have a soft spot for Timothy's ever since a gig back in the 90s where the office building in Ottawa in which I worked had a Timothy's that was open late and helped me through many an overtime session. I also have the standard Canuck gene for Tim Horton's double-double with timbits.

(You might need to scroll down to see the picture if you have a narrow browser window.) 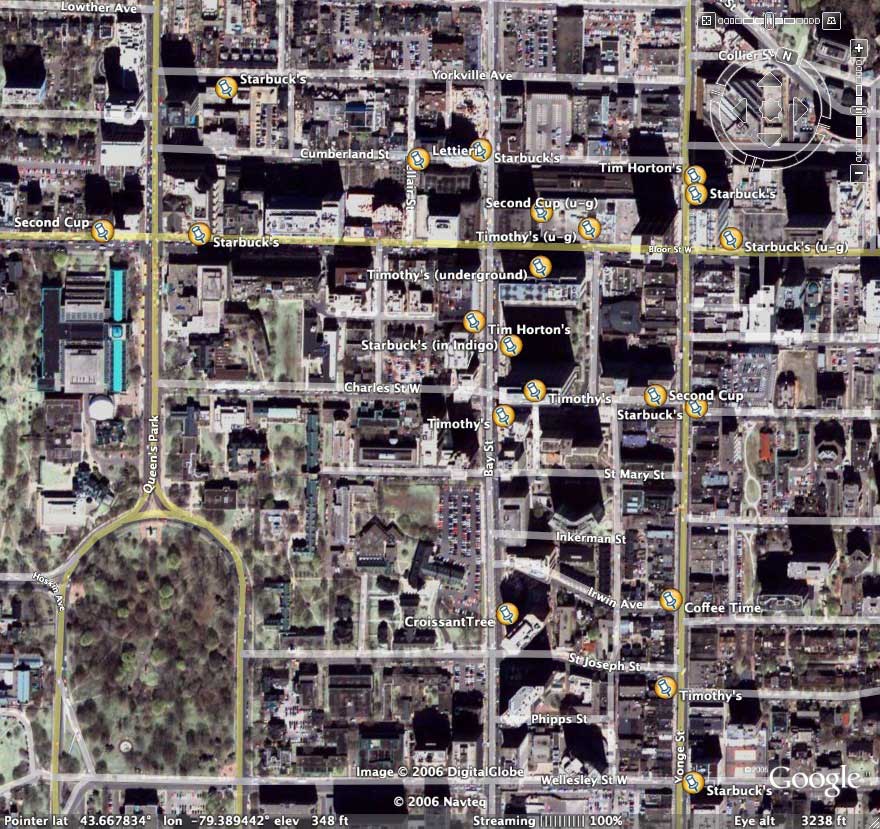