We said goodbye to the Abbaye de Villelongue and we started downhill towards Bram. This was our last day of hiking, and we were headed down to the valley, across the Canal du Midi, to Bram, where we would be taking a train to the city of Carcassonne.

We got off the paved roads pretty quickly, taking dirt trails through the forests and along farmer's fields, almost always down-hill. That's one of the good things about planning a trip up into the hills: the last day or two is spent going downwards.

Soon we emerged from scrubby forest into our first close encounter with wine country: 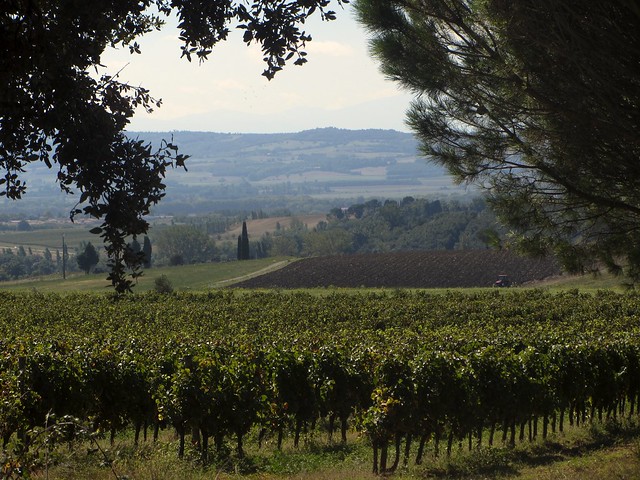 Early September is late season for grapes, and we could see the vines loaded down with heavy bunches of delicious-looking fruit. It was difficult, but I resisted picking any off for my own mid-day snack. 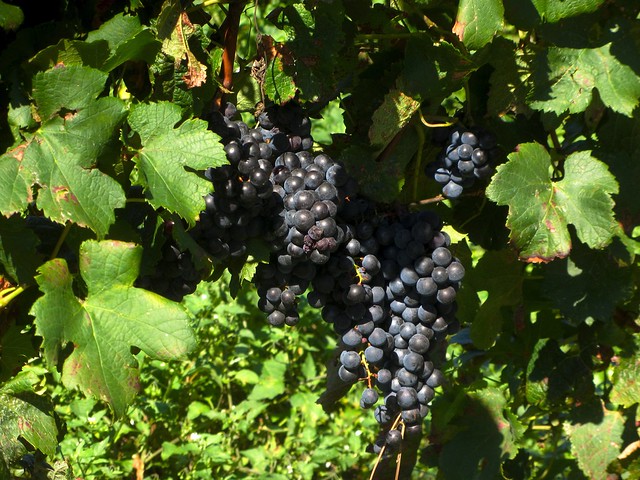 As we crossed more fields, I noticed a large radio dish installation nearby. I had noticed these from our hilltop campsite in Saissac, and it was still unclear what they were for, even closer up. 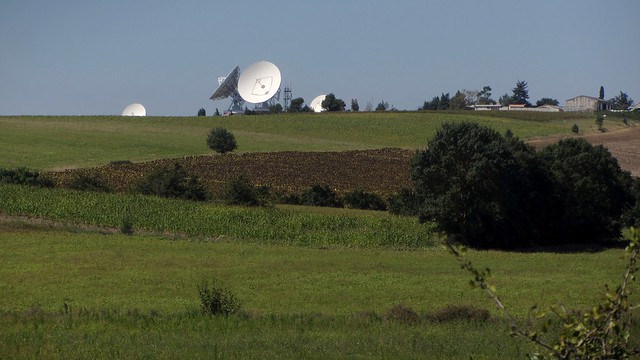 (Interestingly, both Google Earth and Apple's Maps satellite views have this facility blurred out - so presumably it's for the military and/or intelligence. Maybe they're keeping an eye on Spain?)

Looking back, I could see Saissac itself, with its castle ruins in front and giant hilltop windmills behind. 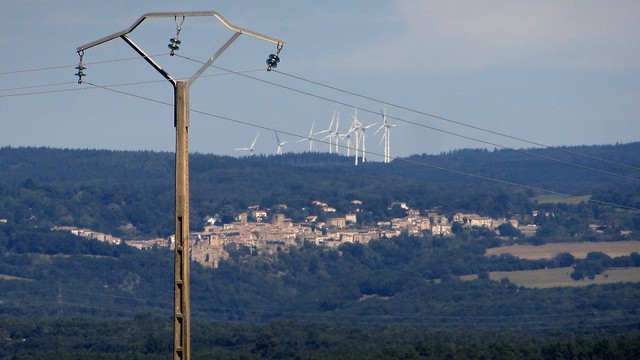 Soon we reached the valley floor. We came to a highway, with signs showing that we were very close to our final destination - but that we weren't really all that far from where we had started from (although we had taken a very roundabout route to get here). 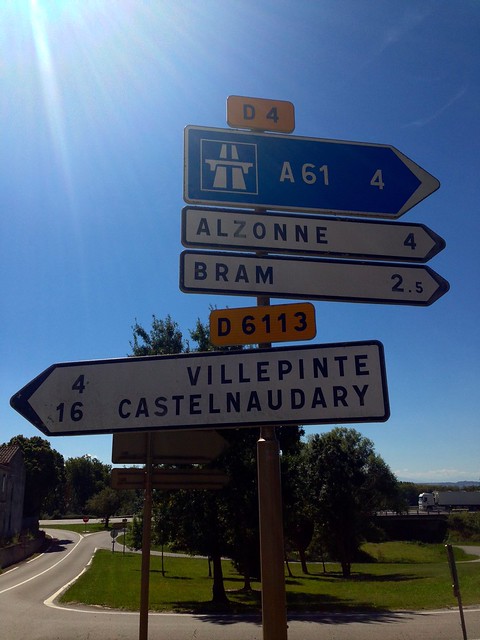 We passed under the highway end then across a bridge over our old friend the Canal du Midi: 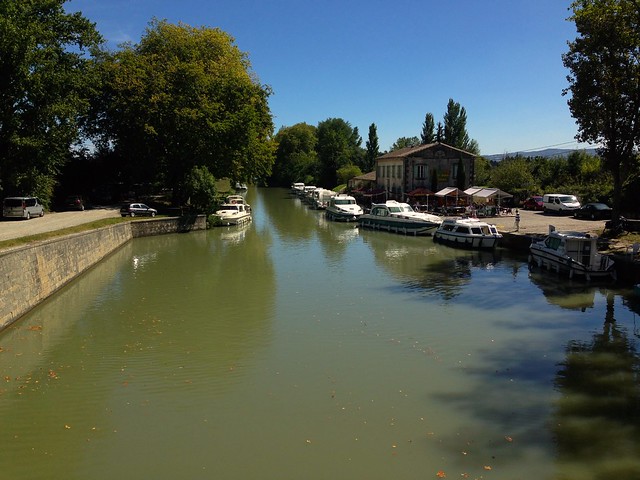 The patio across the canal looked inviting - it was hot and we were getting thirsty - but we got there just as they were closing for the afternoon. So we headed in to Bram proper, hoping to find something downtown.

Bram is still an active agricultural town, and maybe that's why it felt so different from the other places we'd been to on this trip. Back up in the hill country, the towns depend on tourist dollars, and so they're all charming and pretty - but Bram makes its money from farming, and so was more matter-of-fact. Also, it was flat and (today at least) rather hot and dusty. As we walked on the main route into town, I could easily imagine I was somewhere in California's Central Valley.

The town had mostly shut down in the mid-afternoon heat. The shutters were closed, and people only moved when they needed to. We finally managed to find a small bar that was still open, with two small tables out front, and we settled in with some Kronenbourgs (no beer tastes better than a long overdue one on a hot day). 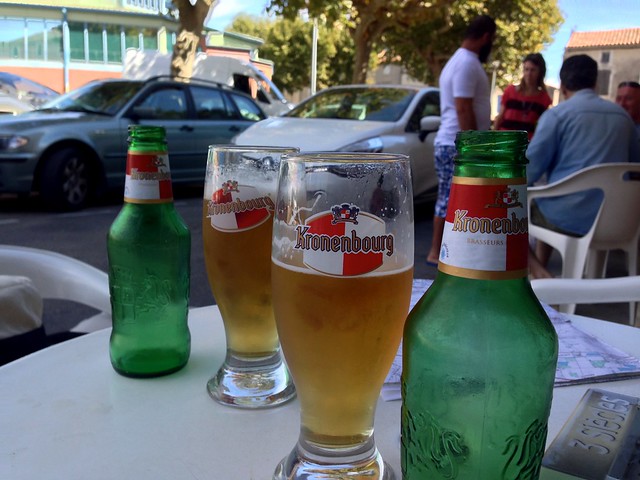 I read up on the town a bit: Bram has been around for a very long time. It was known to the Romans by the much cooler name "Eburomagus" and it was later a major centre of the Cathar heresy. In 1210, during the Albigensian Crusade, Simon de Montfort captured the town after three days' siege. To encourage neighbouring towns to surrender without a fight, he cut off the ears, noses, and lips and gouged out the eyes of all of his prisoners - except for one lucky guy who only had one eye gouged out, so he could lead the rest of his fellow townspeople around as an example.

One of the Cathars' chief tenets was that this world was a fallen one, controlled by the devil, and only a place of suffering. Simon de Montfort certainly helped prove that point for them.

As we drank our beers, we noticed small groups of awkwardly over-dressed, gangly-looking people walking through town. Our patio neighbour ruefully noted that these were Jehovah's Witnesses, who had been in town for a few days, knocking on everyone's doors and proselytizing. They were clearly unsuccessful and unwelcome - although at least nobody was trying to gouge their eyes out. The gangly evangelists completed the "wild west" feeling that Bram had already been giving me.

We fell to chatting with our neighbour, who showed us pictures of his life on his cracked-screen phone and then bought us all a second round of beers. Eventually we got up to tour the town a bit more before our train was due - at which new friend said that instead we should join him at his place nearby and try some of his special liqueurs. We said we were okay, and really wanted to see more of the town. He got more insistent, taking each of us aside when he thought the other wasn't looking and shaking our hands, saying we really really should join him.

We had already been feeling little alienated by this hot closed-up cowboy town, and now this old fellow's over-eager insistence was making us feel even worse. He seemed pretty harmless and had probably just had a few too many drinks and was being over-aggressively friendly - part of the same French guest/host cultural context that sometimes makes for surly-seeming restaurant staff. Being a host is important, and it's worth getting emotional about. Anyhow, our neighbour was upset at us for not taking him up on his offer, and he said we should all meet up tomorrow at a place he knows in Carcassonne - he and his ex-British friend could show us the special below-the-bar drinks that only the locals know.

We finally extricated ourselves. If we had been different kinds of travellers, this could have been the start of an interesting adventure - but then again who knows what he actually had in mind? Anyhow, there was one other thing we really wanted to see before we left town: the pizza-matic. 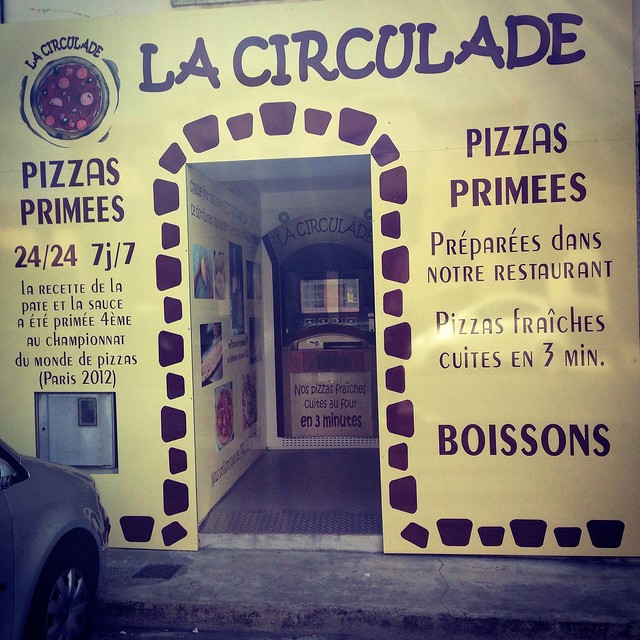 We had seen this on the way into town, and we just had to try it out. It's a computerized vending machine attached to a pizza oven. It's loaded up with frozen gourmet pizzas every day. You can get them frozen to take-away, or it will quickly cook one of them up for you, sliding it out in its own box and everything:

The resulting pizza was pretty good. As one would expect in France, the cheese was a cut above. 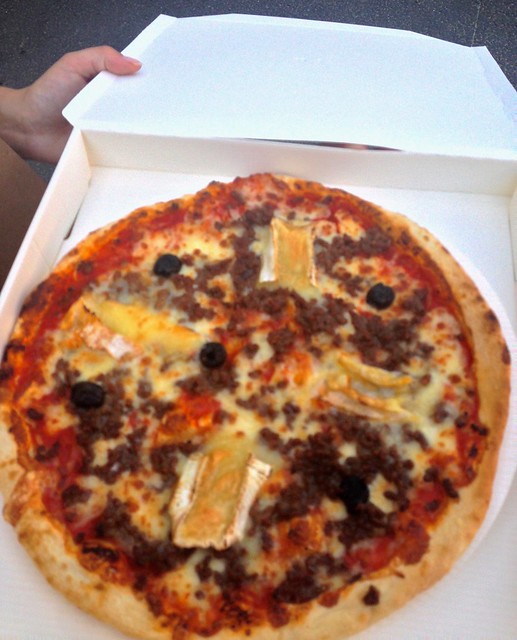 We made our way to the train station. We worried that our insistent old patio friend would be lurking on the way to ambush us with absinthe or something, but he didn't appear. We got our tickets and went out to the platform to wait for our train.

Bram's small train station, on the flat plains of Languedoc, was a study in vanishing points. 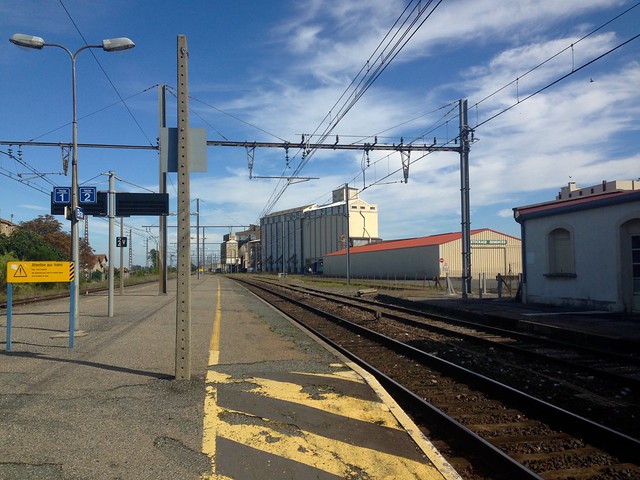 There were even grain elevators in the distance. This clinched it: Bram is a dusty prairie town from a Western movie. We shared the platform with clumps of dodgy-looking youths with deep leather tans and neck tattoos. It felt exactly like the opening scenes of Sergio Leone's Once Upon A Time In The West: flat, hot, dry, silent, and a little uncanny.

Our train finally arrived and we got on, fighting our way through almost the entire length of it to find space for us and our giant bags.

Fifteen minutes later we were in Carcassonne.