In May 2012, my mother-in-law gave us her old car - but we live in Halifax and the car was in Edmonton. So we flew there and drove it all the way back to Halifax. We had great weather and I had a new camera. This is part 12 of a series of blog posts about the trip.

Our next destination after Toronto was Montreal, where we would spend some time with my brother-in-law. Most of the day was spent on the 401, the major highway in south-eastern Ontario. Having spent a lot of time in Ottawa and Toronto, I know this road really well. Today's drive wasn't going to be fascinating every minute like earlier ones on our trip, so we had to find some other things to do.

An hour or so out of Toronto is one of my favourite roadside signs ever: 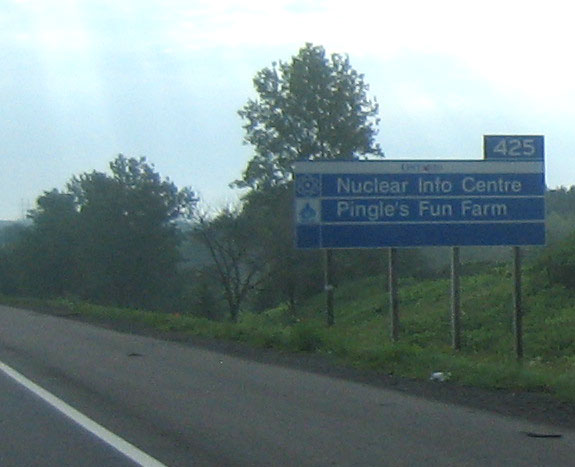 I've been driving past this sign and laughing at its incongruity for decades now, and so we decided it was finally time to visit these places.

The Nuclear Information Centre is part of the massive Darlington Nuclear Generating Station, one of the most advanced (and expensive) reactor complexes in the world, which provides about 20% of Ontario's electricity.

The thing with a nuclear plant is that a well built one that's running smoothly is actually quite boring. It's a series of large buildings with some heavy concrete domes, lots of power lines connecting in, and sometimes the muffled sound of turbines. At Darlington they've turned the surrounding land into a nature preserve, with bike paths and hiking trails along the lake. The information centre had some features describing how the reactor worked, including a sample (presumably empty!) fuel bundle. There was also a lot of material about how much better nuclear power is for the environment, which is of course industry PR, but I agree that this is the true - at least for well built and well managed reactors like this one.

I imagine they must get all sorts of interesting feedback from visitors - especially since March 2011.

Then we drove north a little bit to Pingle's Farm Market and Bakery (they changed the name but haven't changed the signs). It's now mostly a shop and bakery, but it has lots of outdoor space and clearly during the summer there must be tons of extra activities going on. We picked up some very tasty baked goods for lunch and ate them outside in the sun.

On the way back, I saw something cool near the town of Courtice and whipped out my camera for a quick passenger-seat shot: I got so many pictures like this during this trip. It's worth noting, though, how fast the sensor is on my Canon PowerShot SX230HS that a sign whipping close by the car is captured perfectly clearly without any motion blur.

A favourite roadside feature I always like to see on the 401 is the CF-5 fighter jet on a pole outside the Holiday Inn in Trenton. I remembered that they had an air museum in Trenton, which I had once visited way back in 2004. I'm a huge airplane fan, so we decided to check it out. It's now the National Air Force Museum of Canada. We originally planned to just take a few snapshots of the planes outside and leave, but there was now a big fence blocking the view and the admission was free, so we did a more thorough tour.

The highlight of the museum is a massive Handley-Page Halifax bomber from World War II that had been recovered from the bottom of a Norwegian lake and lovingly reconstructed by the museum and a team of volunteers. It's very similar to the Lancaster that we had seen on the first day of our trip, but more fully restored and more dramatically presented: There were other planes and replicas in the main hall, including a gorgeous full-size Spitfire model: They also had the fronts of several planes set up so you could climb in and get a view from the cockpit. I got into cockpit of a CF-101 Nuclear Interceptor and felt giddy like a little boy: They also had the cockpit of a Hercules Transport (complete with "Jump" button for paratroopers) and of a CL-41 Tutor, as used by the Snowbirds. The Tutors look small when they're flying, but the cockpits are nice and wide - more spacious than our car. The park outside had various memorials, both to squadrons and to individuals, as well as many more planes and helicopters. There was a full-size CF-101 with a great "angry moose" design on the tailfin, as well as a double-seater CF-18 and, new since I was last there, a very well preserved East German MiG-21, in much better shape than the one I had seen in Warsaw a few years earlier.

There was some slow traffic near Gananoque, but we got into Montreal in the early evening, in time have dinner at a great Turkish place on St. Catherine Street.