One of the biggest current developments in downtown Halifax is the new Nova Centre. Every step in this project has had its controversy, from the choice of location to the viability of the convention business, from getting funding from all three levels of government to dealing with street scale and Citadel viewplane issues.

A lot of the confusion and anxiety about the project has been due to the long silence from the developer and the government backers, but now that the funding hasclosed more information has been coming out about the project. This summer the Nova Centre group has staged public consultations in Halifax and across the province. I've attended two of their sessions, one in June and another just a few weeks ago where preliminary designs for the new building were revealed to the public.

I have to admit that at first I've been skeptical about the project and the consultations - but this latest event has actually made me excited about the Nova Centre and what it can do for our downtown.

Some personal context, so you can see where I'm coming from: I've spent most of my adult life in Toronto, but spent two years working in Corporate America in Columbus Ohio, where I lived downtown while all my co-workers lived in the suburbs. I moved to Halifax in 2009 and I love how it has a lively but still human-scaled downtown. I've been a long-time fan of Spacing Magazine, Jane Jacobs-style 'new urbanism', and Christopher Alexander's ideas about human-scaled architecture and city-building as he describes in "A Pattern Language". My late father had been involved in blocking the construction of the Halifax waterfront freeway back in the early 1970s.

I live near Windsor and Chebucto and I have an office in the "Manpower" building that spans the block between Barrington and Argyle. I walk to work almost every day, crossing the Common, climbing over the Citadel, and I enter my building through the patio of the Foggy Goggle. Every day I see the view of the city and the harbour from the Citadel, and a few minutes later I see the Argyle pit, where the Nova Centre will be.

I'm no politician or deal-maker or lobbyist or big influencer - I'm just a concerned citizen whose daily life will be very strongly impacted by how the Nova Centre ends up working.

At the first meeting, I felt like the organizers were trying almost too hard to seem inclusive and 'hippie': there was a noodly folk band playing and there was a lot of talk about inclusiveness and responsiveness, seeming a bit out of character for a half-billion dollar complex hoping to cater to business conferences and hedge funds. I wasn't sure how much of this was for getting actual feedback and how much was just to identify and/or pacify potential opponents. However, I really liked the architect's presentation - he seemed well aware of the same kinds of issues and concerns that I have about giant buildings like this. I remember how downtown Columbus had almost been destroyed by a "save downtown" shopping mall and a convention centre, both killing entire neighbourhoods with multiple blocks of windowless walls and large outdoor parking lots - he showed a picture of a similar project in Buffalo as an example of what he didn't want to do, so that was heartening.

The follow-up session in early October continued the slightly granola feeling with an African thumb-piano ensemble playing us in. After some introductory speeches the architect got up and, after telling us how he had re-thought the entire design after the last session, finally showed us his new plan for the Nova Centre.

And I have to admit I was impressed.

The convention centre that all the different levels of government are paying for requires two giant multi-block spaces, one as a convention floor, another as a 'ballroom'. The original design sketches had both of these underground, one end peeking out on Argyle at street level. The new design did a bold and brilliant thing: the convention level is still underground, but the ballroom is lifted up several storeys. 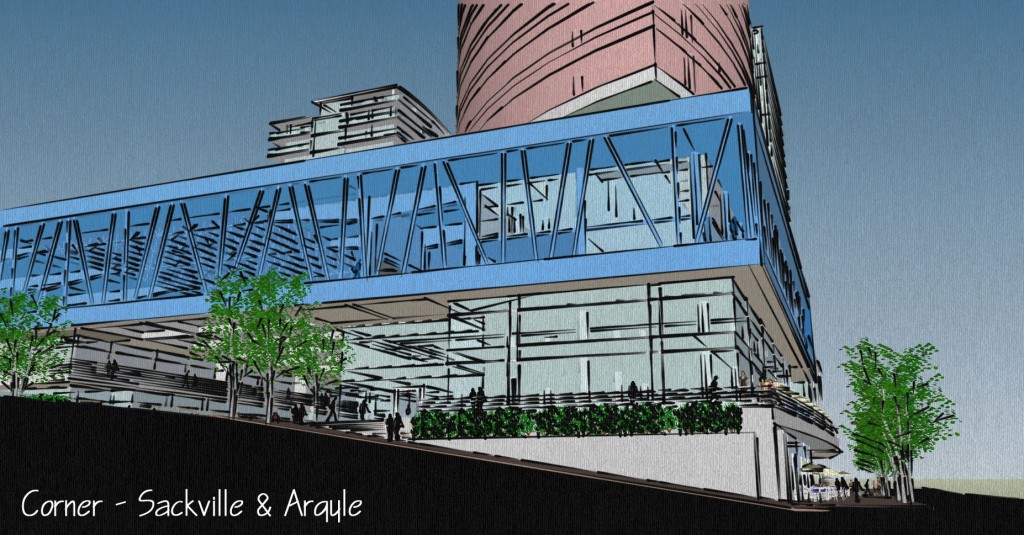 (You can find more at the BuildYourCentre.ca site.)

In one stroke, this does several great things for the design:

-Opens up the space below the ballroom for shops, patios, and large open spaces, such as the planned "Grafton Plaza".
- Allows the street and sidewalk below to be wider, even providing some weather cover.
- Provides a strong defining architectural feature for the whole complex that has a street-level presence (instead of being at the top of some tower).
- The inside of the ballroom space is flooded with daylight and has spectacular views of the city, the harbour, and the Citadel all around it, making sure that visitors experience Halifax even if they spend their entire time at a convention.
- In the other direction, the surrounding city can see what's going on in the ballroom, making it part of the street life in the neighbourhood.
- The ballroom windows are level with the tops of the buildings across the street on Argyle, closing the street without overwhelming it.
- The convention-industry-dependent levels are away from street level, so if the convention centre part doesn't end up being used much, it will still be a lively, busy complex.

To be honest, I was expecting something that would be merely adequate, and now whenever I walk by the Argyle Pit, I enthusiastically try to imagine what the finished building will look like.

That doesn't mean it still might not be a mess, though. I've seen a lot of big projects go bad - and Halifax has a knack for screwing up even simple good ideas. The biggest elephant in the room is parking, more particularly the parking entrance that will have to support thousands of cars coming and going every day, not to mention lots of buses and taxis during a convention. Because of the slope of the hill, the entrance is going to have to be somewhere on Argyle street - one of the most lively streets in the HRM. The session spent a lot of time discussing Argyle, talking about how the new building will be focused on Argyle, adding new shops and patios, and even putting the grand entrance right in the middle of that block, presumably across from the Seahorse. There was even talk about making Argyle a boulevard extension of the Grand Parade - but this seems very much at odds with a giant parking entrance and the associated traffic (have you seen the back-up on Albemarle and Cogswell in the morning or before a game or show at the Metro Centre?).

The architect has proven his ingenuity with the raised ballroom design, so I hope he's thinking very hard about the parking situation. It could be the detail that decides whether this project is a good or a bad thing for the downtown. Maybe they can put the entrance just around the corner on Sackville or Prince instead? That puts all the traffic flow on wider, less pedestrian-focused streets. They could even block off Argyle at Sackville, making it a truly pedestrian boulevard. They could maybe even give up some of the ground level(s) of the complex to make Sackville or Prince a bit wider as they approach the parking area. A lot of this depends on getting the municipal government to reorganize the traffic flow, and who knows if they'd be up for that?

While it would be great to imagine a car-free downtown, where workers would live just a few blocks away and convention attendees could take a train (or monorail?) straight from the airport to downtown, that's just not our current reality - so parking and the related traffic issues are something that we'll have to figure out.

Here are some other thoughts about the project:

There's another presentation event coming up later this week and I'm looking forward to finding out more about this project. It's an exciting time to be in Halifax, and I think we won't recognize downtown in another decade - I just hope it's in a good way rather than a bad way.