I've lived in many cities in my life. I was born in Halifax, but we left when I was four years old. I grew up in Ottawa, went to school near Cleveland, Ohio, worked for several years in Columbus, Ohio - but have spent most of my life in downtown Toronto. I've travelled a lot: just this summer I visited Istanbul, Berlin, Edinburgh Scotland, and Fairbanks Alaska. A few years ago my partner got a job teaching at Dalhousie, and so I followed her, coming back to the place where I was born, after more than thirty years.

I have some opinions on downtown Halifax. I live and work here. I have made the active decision to move to this city, and the odds are pretty good that I'm going to spend the rest of my life here. The city and especially the downtown are important to me.

The first time I walked over the Citadel and into downtown Halifax, I was struck by how downtown Halifax had managed not to screw things up. Passing down Carmichael Street and crossing the Parade Grounds to Barrington, I saw a mix of older buildings and relatively well-scaled newer ones, with a great mix of shops, restaurants, and offices. The waterfront was full of tourists eagerly taking pictures of everything, and every patio on Argyle Street was packed. "Wow," I thought, "it's a living downtown! I could really settle down here."

There were a few blemishes on what was otherwise ideal - mostly large, concrete blemishes like Scotia Square and the Metro Centre. But these were from an earlier age of 'urban renewal' when 'slums' were 'improved' by being flattened and replaced by brutalist concrete high-rises. Heck, back then, they seriously considered building a freeway along the harbour - right where all the tourists are now. It's a good thing those days are over and we know better than to make those kinds of mistakes ... right?

The big news over the last while has been the plan to build a giant multi-block Convention Centre on Argyle street, topped with two large towers containing offices and a hotel. It's such an ambitious project that it requires funding from all three levels of government, along with a private developer. A related issue is the ongoing story of the 'death' of Barrington street, especially the boarded up block between Prince and Sackville streets. I spend a lot of time on Barrington - in fact I have an office in the Roy Building, in the middle of the 'dead' block, with a great view of all of the empty storefronts. 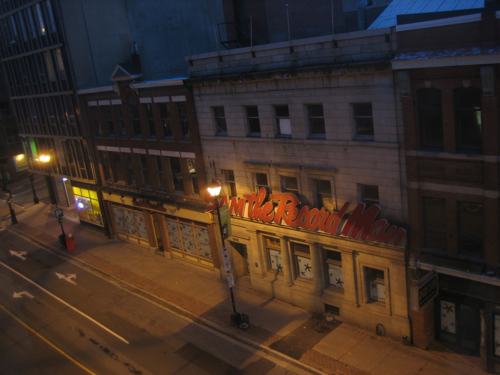 I have a lot of specific points I want to make, but I'm worried that we're already getting into TL;DR territory. I'm going to follow up with more details in their own posts - but I want to close for now by saying this:

Halifax already has one of the best downtowns in North America. It wasn't hollowed out like so many U.S. downtowns, and it hasn't succumbed to manic growth and developer speculation like Toronto or Vancouver. It has a great mix of street-level life, from bohemians to bureaucrats, and the shops and restaurants to serve them. People tell me that Halifax is a much more exciting, livable city now than it was even ten years ago. I feel like the downtown right now could go either way: hollowed out and lifeless, or the kind of place that people want to move to from across the country and around the world. Downtown Halifax has 250 years behind it - let's not mess it up.