Istanbul: Overwhelmed by History in the Hippodrome
Posted on: 2010-07-17

I've lived most of my life in North America, in places where built history only goes back about 200 years, and written history only about 400, so I've tended to put the places and events of the ancient world into the same part of my mind as those of well-defined fantasy worlds, like Middle-Earth or Majipoor or Azeroth.

I had also recently been hearing a lot of outrageous tales about Istanbul/Constantinople. I have recently been using the audiobook version of Gibbon's Decline and Fall of the Roman Empire to help go to sleep (it's the perfect mix of interesting and monotonous) - and Gibbon spends a lot of time talking about ancient Constantinople. Many of the events he recounts that took place in the city sounded so fantastical that I would wonder if I had dreamed them - but I would look them up the next morning and they would turn out to be part of the historical record.

Finding myself in the place where these things actually happened gave me a sense of temporal vertigo.

Istanbul - especially the old town - is saturated with history. The stories are piled densely on top of each other, much like the architecture. The most densely-packed site of ancient connections is now a pleasant tree-lined park with benches: the site of the ancient Hippodrome, or chariot-racing track. The site has fantastic artifacts, and a fantastical story. It's difficult to say which are more stunning to someone who has lived without a lot of history around him. I'll start with the story: the Nika Riots. The sixth-century Emperor Justinian was one of the last great Roman/Byzantine emperors, but he had come from a peasant background and did not have a lot of support from the aristocratic families in Constantinople. The fact that his influential wife Theodora had previously been an exotic dancer and a courtesan didn't help. The various factions in the city coalesced around certain political and theological positions - and each also became connected to one of the four chariot racing teams: blues, greens, whites, and reds. The chariot races became an outlet for the general antagonism between these factions, and riots would often occur after the games. The hippodrome was right next to the Imperial Palace (where the Blue Mosque is now), and so the crowds could shout things at the Emperor watching from his private balcony. In 532, the violence changed from football-hooligan rioting to the brink of civil war, with the two biggest factions, the Blues and the Greens, joining forces behind a new candidate for Emperor, and burning down much of the city. Justinian considered fleeing the city, but the Empress famously said "Those who have worn the crown should never survive its loss. Never will I see the day when I am not saluted as empress," and that "royalty is a fine burial shroud."

Justinian eventually managed to placate/pay off the Blues - so as the rebel emperor was about to be crowned, all of the Blues left the Hippodrome, Justinian's top general Belisarius then closed off all of the exits, brought in his army, and killed all 30,000 members of the other factions. 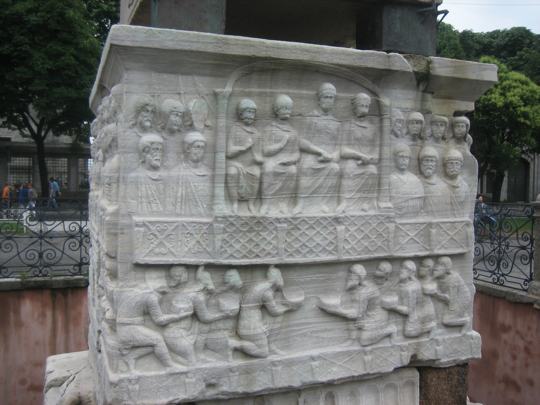 (This is how people treated Justinian after the Nika riots.)

Supposedly, the bodies were all buried on the spot - meaning that this pleasant park is dense with corpses several meters below the grass.

If that wasn't enough history for one place, there are three monuments here, which marked the central spine of the racetrack - they were important enough to be brought here from across the ancient world. 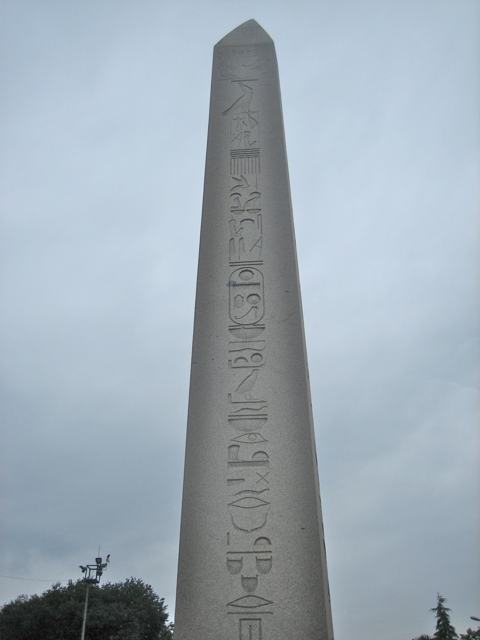 The north end of the park has a granite obelisk, with beautifully stylized hieroglyphics along the sides. I at first considered this some kind of modern addition, since it is in remarkably good shape and the design of the carving is so clean and minimalist and still so sharply delineated in the rock - especially compared to the faded marble sculptures at the base. It turns out I was wrong - very wrong. It is a real Egyptian obelisk, raised by the Pharaoh Thutmose III in 1490 B.C.. It is perhaps the oldest thing in this antiquity-laden city. There is only a little sign of wear at the top, presumably from several millennia of weather. The Egyptians sure knew how to build for the long term. Supposedly this is only the top third of the original monument, and even so it took the best-in-the-world Roman engineers 30 days to get it erected. 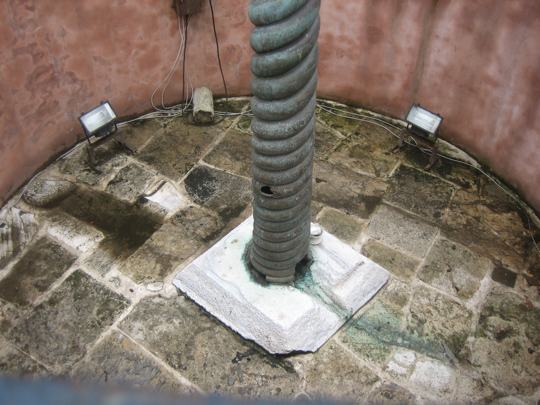 The middle monument is a small coil of bronze, mostly below ground-level. Not very impressive in itself, until you find out that it is the remains of a statue of three intertwined serpents that was in the Temple of Apollo at Delphi, one of the holiest places in the ancient world. Then you find out that it was a gift to Apollo from the Greek city-states to thank him for their victory against the invading Persians in the fifth century B.C.. Yes, those invading Persians. Then you find out that it was made from melting down the bronze from the actual shields and armor of fallen Persian warriors. So instead of just a piece of bronze in a hole in the ground, you realize you're looking at the physical remains of one of the most significant incidents in history.

There was a head to one of the serpents here for a long time, but it was removed by a Polish diplomat in 1700 - probably still giddy from their defeat of the Turks at the Siege of Vienna only a few years earlier. The third monument is a tall column, but it is in much rougher shape than the Egyptian one. Its provenance is unclear, but for much of its history it was clad in bronze, which must have made it look quite impressive. It seems a little sad now.

This is the end of my writing about Istanbul. I am already back from Europe, and still have a lot to say about Berlin and Edinburgh - which I hope to do before I go to Alaska and get even more things to write about.