When I travel, I often find it hard to figure out what is the 'real' place and what is the 'tourist' version. In many places, the historical events and fictional stories (sometimes they're the same thing) that have been set there give a certain 'aura' to a collection of streets and buildings and people.

Cities have a sense of themselves and their stories, and this is reflected in not only what they build but what they preserve. This self-image comes out even more strongly in how the city presents itself to visitors and tourists.

The northern part of Edinburgh is the 'New Town', planned and built in the late 18th century, and one of the finest examples of Georgian architecture and city planning. At the time, Edinburgh was one of the capitals of the Enlightenment, and the rational, geometrical, classically-inspired architecture reflects its vision of itself as "Athens of the North".

The biggest influence on Edinburgh's (and Scotland's) self-image would come a little later than the New Town, but end up looking earlier. It is difficult to understate the importance of Sir Walter Scott.

Sir Walter Scott was a hugely popular poet and novelist in the late 18th and early 19th centuries. He was born in the Old Town of Edinburgh and raised on a farm in the Scottish/English Borders region. His poetry and later his novels were almost exclusively about Scotland and its history, including Waverley (yes that's what they named the train station after), The Heart of Mid-Lothian, Rob Roy, and The Bride of Lammermoor. These novels set off a worldwide fascination with Scotland, and popularized the image of the claymore-wielding, bagpipe-playing, be-kilted Highlander.

Funnily enough, the Highlander image became hugely popular a few decades after the real Highlanders had mostly disappeared, due to a combination of political, economic, and social pressures. This Highlander mania peaked in 1822, with King George IV's royal visit to Scotland. The king personally asked Sir Walter Scott orchestrate the entire visit to make him seem as Scottish as possible (making the argument that he was as valid a Stuart King as Bonnie Prince Charlie). The pageantry for this visit was all about kilts, especially at the "Grand Highland Ball" - every family in Edinburgh, regardless of their background, E'discovered' their Highland heritage and their 'ancient' Tartan (many of which were made up on the spot by their tailors). Those kilted bagpipers you see and hear in the streets of Edinburgh (so much so that after a day of touring you can still hear their ghosts still at the edge of your hearing) are almost entirely because of this royal visit almost 200 years ago.

Sir Walter Scott keeps showing up in Edinburgh's cultural history like some kind of super-hero. For example, he personally re-discovered the Scottish Crown Jewels in 1818. 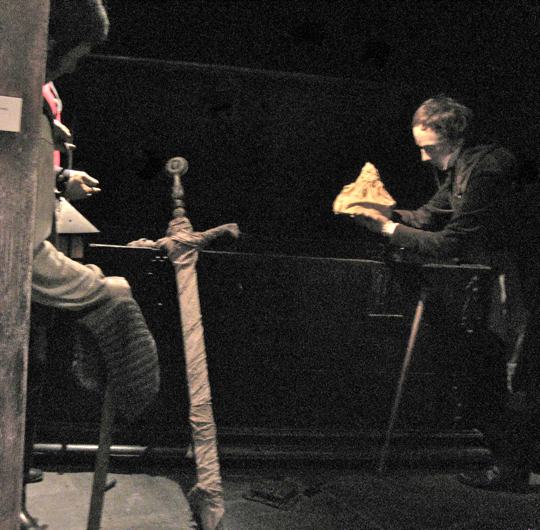 Scott had another big cultural contribution: In 1819, he switched from writing about 17th and 18th century Scotland and came out with Ivanhoe, set in 12th century England. This hugely popular novel helped fuel the 19th-century fascination with the Middle Ages, which continued through people like John Ruskin and William Morris to fuel the Gothic Revival in architecture. This comes full-circle in the Sir Walter Scott Monument in downtown Edinburgh: a 200 foot tall steeple that is so crammed with gothic detailing that the structure itself is almost invisible - wrapped organically around a statue of the man who directly inspired that style. 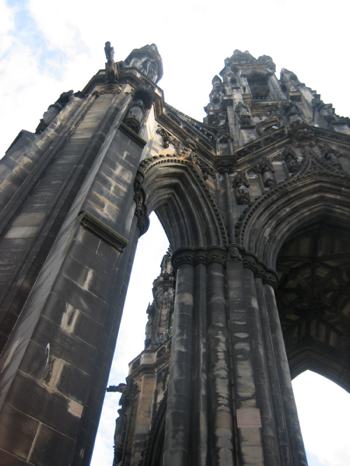 Of course, our culture is still fascinated with the Middle Ages - from Disney animated fairytales to the Society for Creative Anachronism - which explains quite a number of those 1 million visitors that come to Edinburgh every year.

A city's idea of itself is not just in what it builds, but also in what it keeps: it's highly likely that without Sir Walter Scott's influence on the manias for all things Scottish as well as all things Medieval, Edinburgh's now hugely popular Old City would have been 'cleaned up' and 'modernized' long ago.

The cultural influences sometimes go both ways. When we were in town, the front esplanade of Edinburgh Castle was set up with large flag-topped grandstands for the Royal Edinburgh Military Tattoo: I can't imagine that I'm the only person who saw this and was immediately reminded of the Quidditch pitch in front of Hogwarts School for Witchcraft and Wizardry from the Harry Potter series. J. K. Rowling is from Edinburgh, and wrote the first volumes of the series in various cafes around town - there must have been at least some kind of influence on her imagination.

So the looming Scottish castle, founded in the 12th century but mostly from the 16th century, and given fictional meaning by Sir Walter Scott in the early 19th century and consequently preserved in its 'original' state several decades later, ends up influencing other popular authors in the late 20th century, which then further colours how people see it in the early 21st century.