On the tip of the peninsula of Old Istanbul, Seraglio Point, is the Palace of the Ottoman Sultans, Topkapi. It is a large walled complex, including pleasant parks and courtyards, the throne room, various museums, the Divan council chambers, and the Imperial Harem.

Yes, that's right, I've been inside the Ottoman Sultan's Harem. I was even inside the harem's bath-house. In the fevered Orientalist dreams of the West, Istanbul is a magical place, the Imperial Palace is a source of unimaginable luxury, the harem is home to decadance and exotic sexuality, and the bath-house of the harem is just plain NSFW.

Well, the real-world version is quite pleasant, with a lot of white marble highlighted with gold and pretty skylights. They even have hot and cold running water. 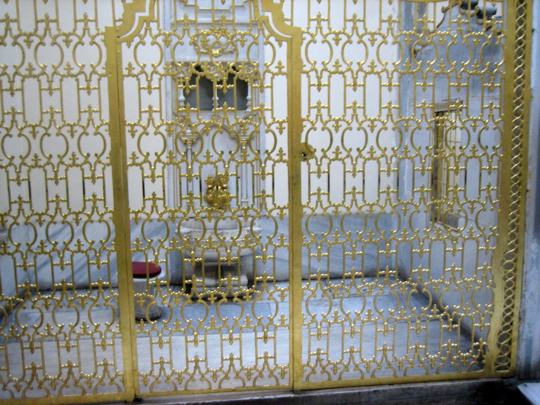 (Fill in your own blanks!)

Conversely, many of the people in the harem didn't get to see the outside world very much. Some of the paintings and frescoes in the harem depict landscaped parks and waterfront pavilions, which might have seemed just as exotic to the harem dwellers as the harem would to outsiders. In fact, I'm sure there are real waterfront pavilions out there somewhere that have fanciful frescoes of the Ottoman harem on their walls - sort of a two-way connection of idealized imagination. We were lucky enough to see the palace on a beautiful sunny day. Many locals visit the outer parks, picnicking on the lawns and enjoying the view. The easternmost point of the grounds seems to be a favourite place for young couples to meet and cuddle. There is also the inevitable open air cafe on the point with the best views of the water.

The first inner courtyard reminded me a lot of the campus of Stanford University. One could spend a lot of time figuring out the complex architectural cross-relationships between Topkapi and Stanford, which would probably involve Muslim Spain somehow, but now I can say with authority that Stanford's grounds are literally 'palatial'. Only some of the harem complex is accessible to visitors, but the rooms and courtyards that you can see are pretty. The chambers of the princes are brilliantly decorated in tile and paint and wood inlay and stained glass, with a nice view of the city just over the walls. The royal chambers are also dense with decoration - it was interesting to see how much European classical and baroque style there was mixed in with the intricate Arabic calligraphy and fine Iznik tile work. We almost missed the throne room as we passed into the inner courtyard - mainly because it has no throne. It has a large canopied square space that looks a bit like a large bed, where the Sultan would sit, surrounded by luxurious carpets and cushions, and receive representatives and make executive decisions.

The palace has several museums, featuring weapons and armour, jewelry, touring art collections, and priceless Ottoman miniatures. We decided to go into one that had many Islamic relics - there are many places where one can see fine jewels and art, but not many museums are also holy pilgrimage sites. One of the interesting contrasts between Christianity and Islam is that, while Jesus was unknown outside of a small group of followers at the time of his death, the prophet Mohammed was a powerful leader within his lifetime. This means that there was much more interest and care in preserving Mohammed's relics, even when he was still alive. This museum has, among other things, his sword, his bow, and an impression of his footprint, as well as, under wraps and only brought out on very special occasions, his cloak. It is quite something to see such personal items of such a famous figure, especially when they're 1400 years old.

This museum also has what it claims to be King David's sword, the prophet Joseph's turban, and Moses' staff - although they were vague about the provenance of these particular items (a little bit of further research says they came from a collection in Egypt but I haven't been able to find more information) David's sword is of a suspiciously similar design to the other much later swords in the collection (and wasn't he in the Bronze Age?), and Moses' staff is quite small and seems to have been covered in gold (presumably at a later date) - even if these aren't what they claim to be, the provenance I was able to figure out makes them at least a thousand years old and fascinating on their own.

As we made our way back through the courtyards and parks, the late afternoon sun lengthening the shadows and giving everything a golden tint, I was again reminded a bit of Stanford - but then I saw a flock of parrots fly past a half-ruined ancient Roman column and nest in a gnarled old tree, and remembered where I was.