This is part 5 of a series of blog posts describing my trip from Fairbanks Alaska to my great-grandfather's research cabin on Flaxman Island.

We had finally made it to Flaxman Island. Even in late July the temperature was barely above freezing. There were chunks of ice floating just off shore. We could see the cabin and outbuildings in the distance across the tundra. 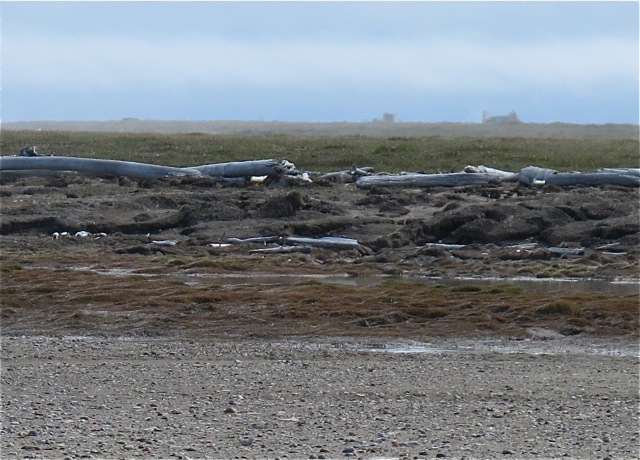 Unfortunately, it would have been too difficult to make it across the land to see them more closely - also Kirk was concerned that the fog would roll back in soon and make it dangerous to take off.

There was a surprising amount of life up there - sea birds flew by, and little fish swam in the tide pools.

We also saw, just on the horizon to the west, some kind of large island-based complex - presumably connected to the oil industry. 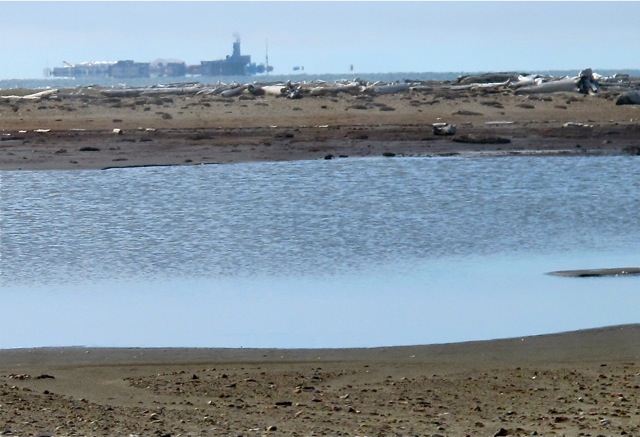 My great-grandfather was the first person with geological training to suggest that there might be oil up in this area, and he was certainly right - Prudhoe Bay, just 60 miles to the west, is the largest oil reservoir in the United States (the Alberta Tar Sands have a lot more oil, but it's much more difficult to get at). The area we flew over was the Arctic National Wildlife Refuge, but up here we were closer to oil country - funnily enough, up here at what seemed like the edge of the world, we were much closer to 'civilization'.

The tensions between the oil industry and naturalists have been growing, and I predict that we'll be hearing a lot more about this part of the world in the next decade or so.

This trip took place in the middle of the BP Gulf Spill fiasco, so oil was certainly on my mind. Flying over, we saw occasional oil barrels sitting on the tundra that had presumably been washed down rivers or over ice (supposedly there's a stimulus fund project to tag and retrieve all of these wayward barrels).

On Flaxman, I saw this patch of rainbow-shininess on the edge of one of the tide pools (the red is just the colour of the mud): Of course, I don't know if this was from an artificial oil leak, or simply some oil that had seeped out naturally nearby (which is known to happen around here occasionally), or if it was something else entirely (bird poop?). All sorts of random stuff floats around up here, and I didn't see any more evidence of oil while I was up there - so who knows?

Here's a panorama video I took while on the island, to give you a better sense of the space:

This had been quite the summer of new experiences. Less than a month ago, I had been in Istanbul, a 2500-year-old megalopolis of 15 million people and past capital of two empires, and now I was 4500 miles away on Flaxman Island, often completely uninhabited and just off the edge of the continent.

So, when I was in Istanbul I bought a box of Turkish Delight, and brought it with me all the way to Flaxman Island, to tie the two places together. Here it is, along with a stone I picked up on the beach and brought home with me (it now sits on my desk). Soon the fog started looming on the horizon, so we had to leave Flaxman Island. We took off and got a last look at my great-grandfather's research station before heading south.

(If you haven't bothered looking at the videos yet, this is one worth making an exception for. It's pretty spectacular).

Now we just had to make it back to Fairbanks.