I enjoy writing up blog posts about my trips, and various friends and family members seem to enjoy reading them. However, even small posts take quite a bit of time and energy to put together - so I've been writing about my Europe trip while on another trip to California, Nevada, and Alberta. I'll get back to posting chronologically (Montolieu has several posts worth, not to mention Carcassonne), but I saw some things in Las Vegas a few days ago that connected directly to my time in Europe.

Walking down the Strip, we just had to investigate The Venetian, since we had seen the European original only a few months before. The Venetian includes an authentically maze-like shopping and dining mall with canals and gondoliers under a painted sky, but the most striking feature is the front facade of the complex, which manages to look like all of the highlights of Venice compressed into a city block:

(I couldn't fit the Campanile replica into the frame, but it's just to the right.)

When we were in Venice, we dealt with the overwhelming art and history in Saint Mark's Square by focusing almost exclusively on the column capitals of the Doge's Palace. These turn out to have a rich history all by themselves, and were well worth investigating.

I noticed that the Venetian's facade also includes a shortened version of the Doge's Palace. I decided to check out what they had done for their capitals. They're a detail that most people wouldn't really notice but they're also a key element in the design, so it makes a good reference for the entire replication project.

For reference, here's some of the originals, mostly from the 14th and early 15th century: 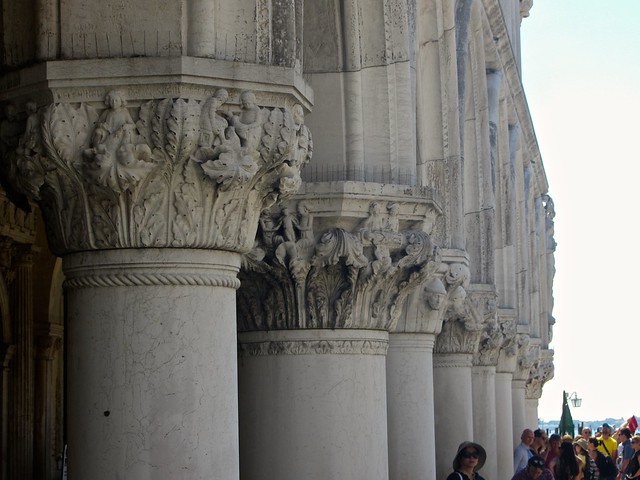 Each capital is unique, although in several cases certain designs are duplicated. Some have figures or little scenes representing the Virtues and such, while others have dramatic collections of surprisingly life-like faces. Several columns even have animal heads on them. A number of the columns are larger than the others, and these have more elaborate designs on the capitals.

One section of the colonnade was done several decades later than the rest, and these are mostly copies of the older designs - done, as John Ruskin forcefully points out, by less skilled hands who removed the life from the originals by trying to make them more "classical".

The colonnade at the Venetian was all done at once some time in the late 1990s. 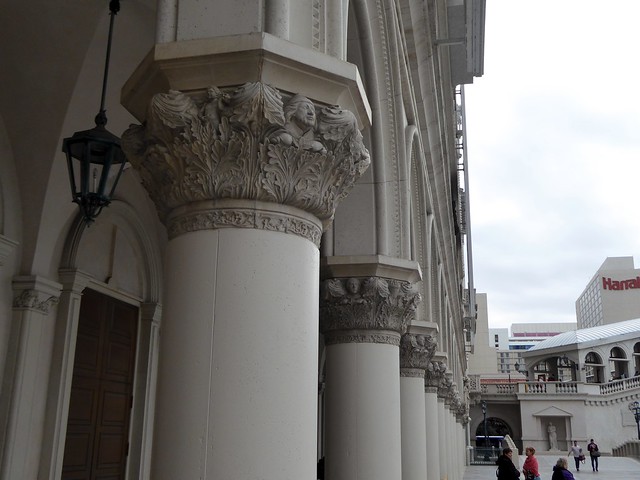 As you can see, the general effect is not too bad at all. On closer examination, though, it's clear that the Las Vegas columns are from multiple assembled elements instead of single pieces of stone. They didn't make a perfect facsimile of each of the capitals in the original. Instead, they took some of the notable elements from the originals and combined them into a few repeating capital designs:

Also, all of the columns at the Venetian have the same ring patterns underneath the capitals, while the originals in Venice are each different.

I'm no expert, but the repeating patterns lead me to guess that the modern versions were made from poured moulds rather than individually carved by hand. However, the moulds are quite detailed and give a strikingly similar impression to the original.

There is even a set of capitals that look like the "Virtues" in the original, complete with Latin writing on top. Here's a six-hundred-year-old Italian original: 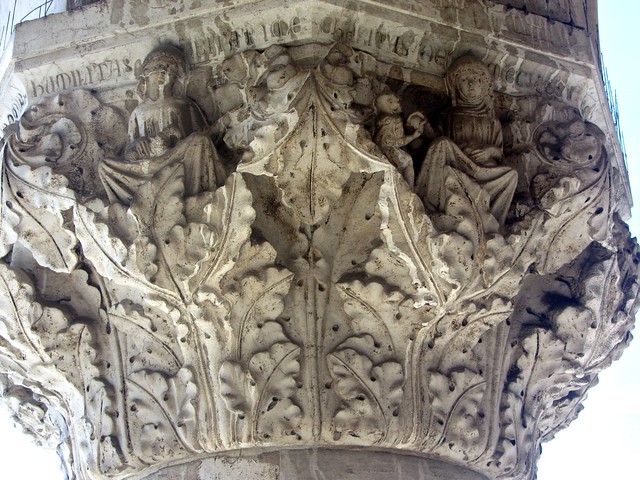 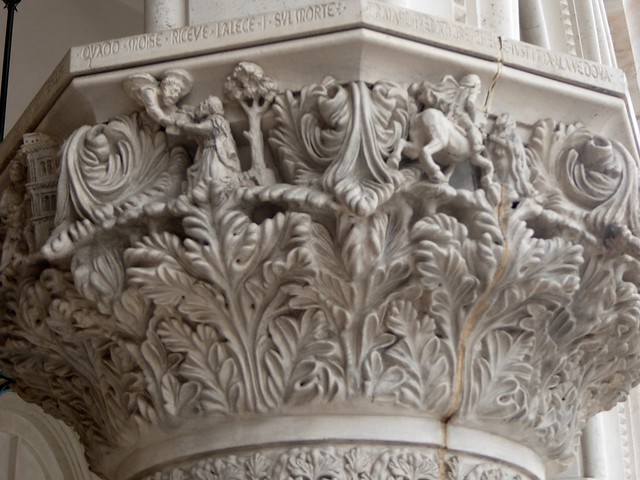 Interesting to note that the replica has moved the text to a higher point on the capital, where it's easier to see and was presumably easier to write. The text doesn't seem to entirely mimic the originals, nor does it seem to match up with the figures below - but I'm impressed that they put text in at all, and even more so that they kept the same letter style.

Interestingly, the new capital is already cracking, while the old one is still in one piece (if a bit dirty).

So it is perhaps an imperfect copy, but I have to admire the effort the designers at the Venetian took to at least give a strong impression of the original. To be honest, they could have just stuck some Corinthian capitals on this and most people wouldn't have noticed at all.

There were times, though, while wandering the outside of the Venetian, that I could fool myself into believing I was in the original place. 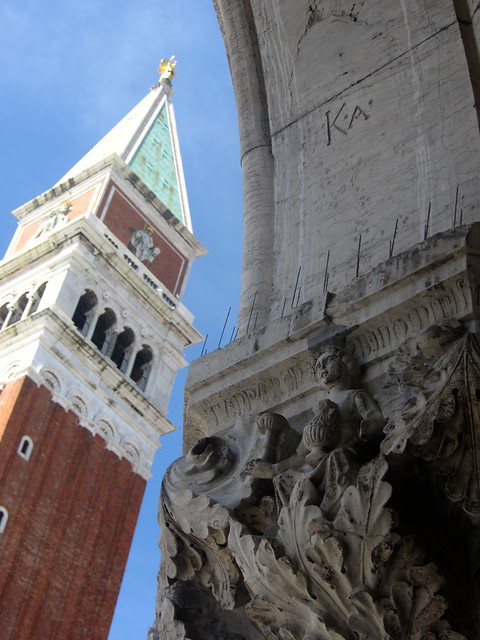 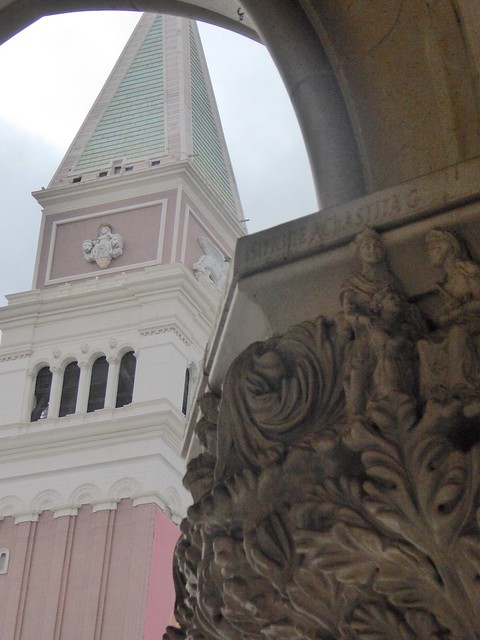 If John Ruskin considered the later work on the original Doge's Palace to be debased copies of the original from a fallen age, I wonder what he would think of these copies of copies? I imagine he would be shocked and outraged. Of course many things shocked and outraged him. But he valued balance, taste, human scale, and individual craftsmanship reflecting real life - so I think the Las Vegas Strip as a whole would have given the poor man a serious breakdown.

Of course, one could seriously argue that the original Venice in its current form is not a whole lot more "real" than the replica version in the desert. But that's a discussion to have with Jean Baudrillard at some other time.

While the colonnade itself is an impressive simulacrum of the original, the far end of the colonnade in Las Vegas touches a canal - more like a swimming pool than a marshy extension of the Adriatic. Behind, the canal passes under the Rialto bridge, but ahead it rather belies its identity as a simulacrum, by ending abruptly at a wall, covered with a hopeful trompe l'euil of the Italian Venice: 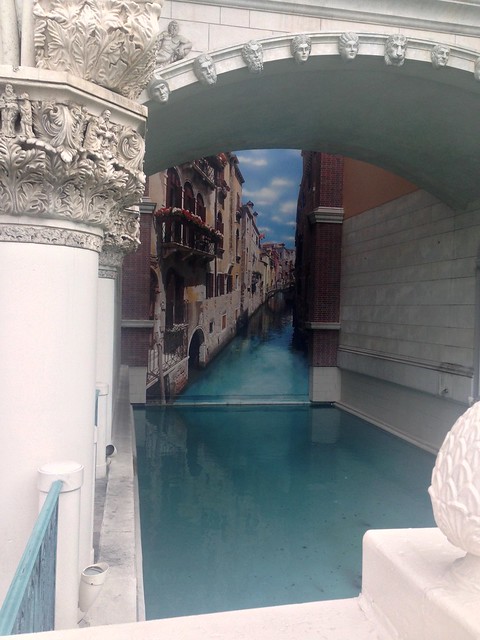