After a restful night in a real bed for a change, we were treated to a full and perfect French country breakfast: orange juice, croissants, fresh bread, jam, fruit, cheeses, and - most important of all - big carafes of coffee and hot steamed milk to be poured into large bowls. I've only seen this style of coffee in Italy, southern France, and Venezuela (although I hear it's popular all across Central and South America) and it's by far my favourite way to drink it. It's smooth and warm and somehow feels like chocolate and I could drink it all day long.

The clouds that came in yesterday didn't bring much rain, but instead settled down overhead, locking in a mass of humidity over us. The first part of our hike was all up-hill along a narrow winding road, with frequent cars and trucks zipping past - nerve-wracking, although at one point an entire small travelling circus drove past. 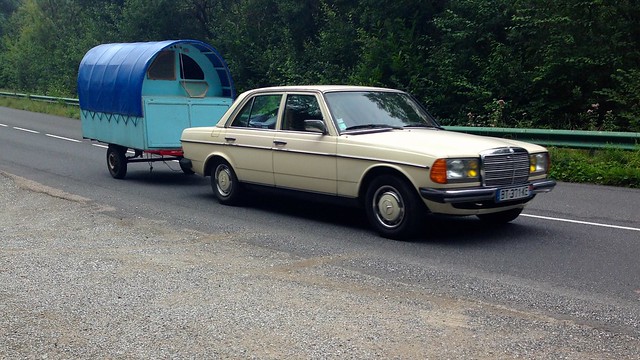 Finally we came upon a path that went into the forest to our left. From our highly detailed topographical maps, we figured that this would get us to where we were going - and if not, at least it would get us off of the road. Over our days of hiking we had already coined a term for picking a Road Less Traveled By: "Robert Frosting" - as in "let's Robert Frost this way." It has indeed made all the difference. 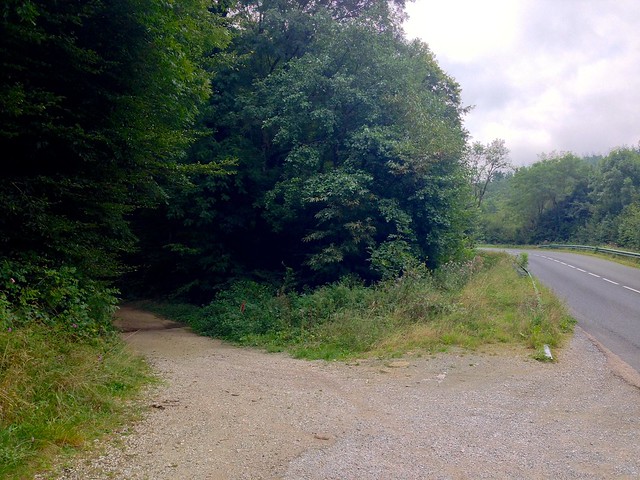 With the overcast skies, the countryside felt much more like the U.K. than south-west France.

Soon we came upon Les Cammazes. It was a bit bigger than some of the other towns we had passed through, although it still had some pristine lovely houses. 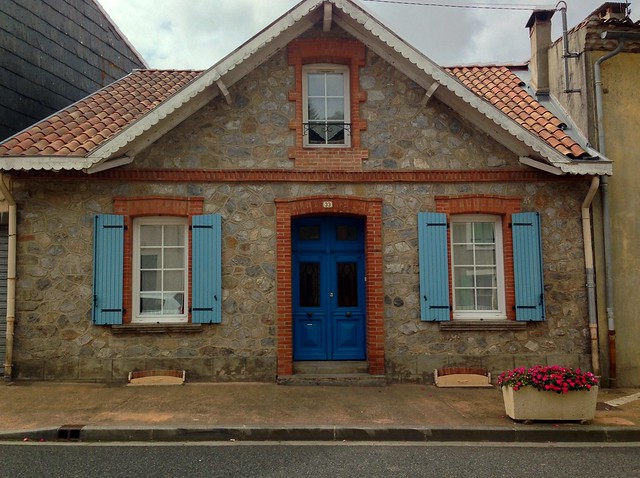 And of course the Mairie had the phone booth, the post box, and the Town Defibrillator. 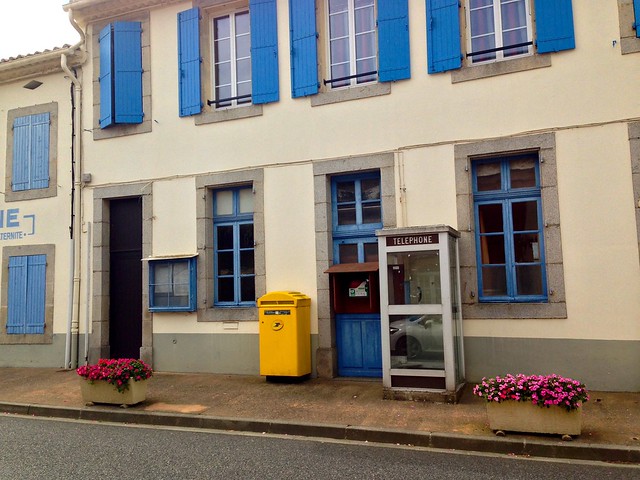 We then came upon a small rectilinear stream, another part of the "rigole" network that supplies water to the canal system in the valley. At Les Cammazes, it cuts through a steep ravine, but instead of going around the main hill in town, it runs underneath in its own neoclassical-looking tunnel. 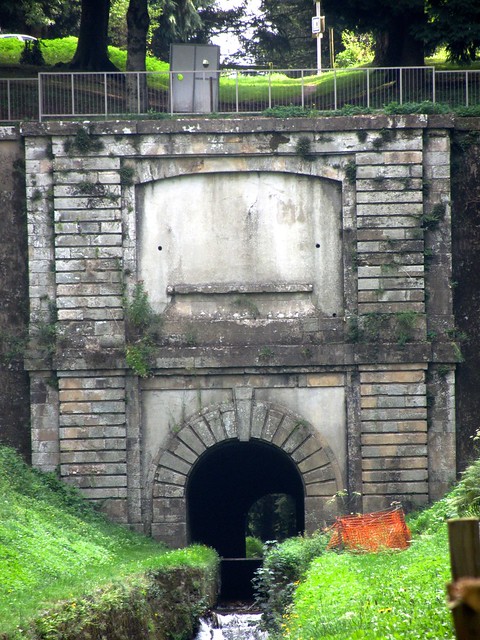 We climbed over the hill and then back down to the water. We noticed that there were footpaths on either side of the rigole into the tunnel. It was only a few hundred metres and the other end was clearly visible, so I decided to see how far I could get inside. 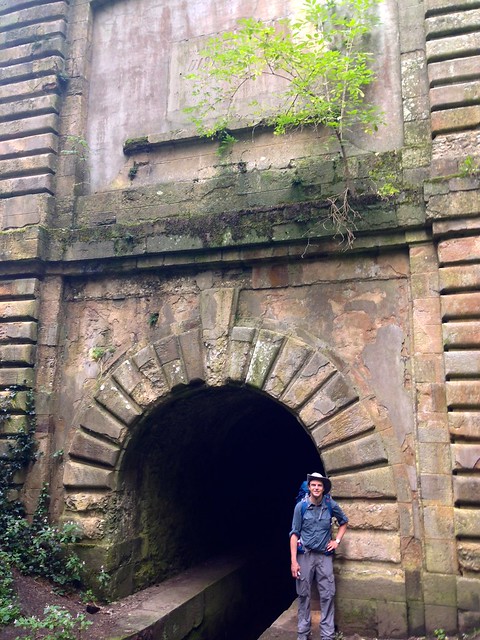 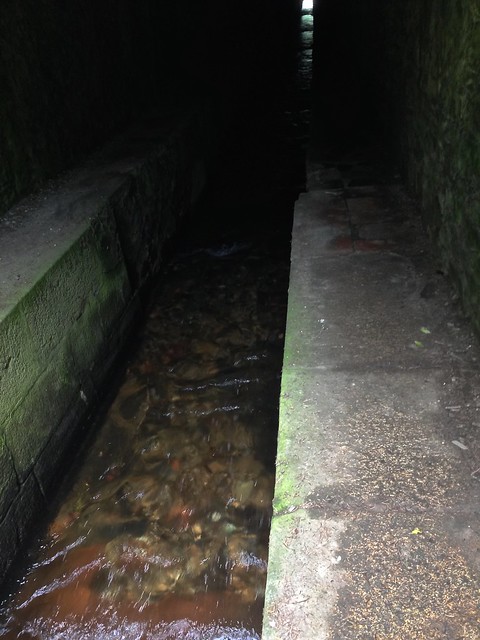 The tunnel was dark and rather noisy with the running water, but the stonework was excellent and the path was sure and stable. I definitely felt like I was in a real-life Dungeons & Dragons game, though. At any moment, I expected to see kobolds or something. 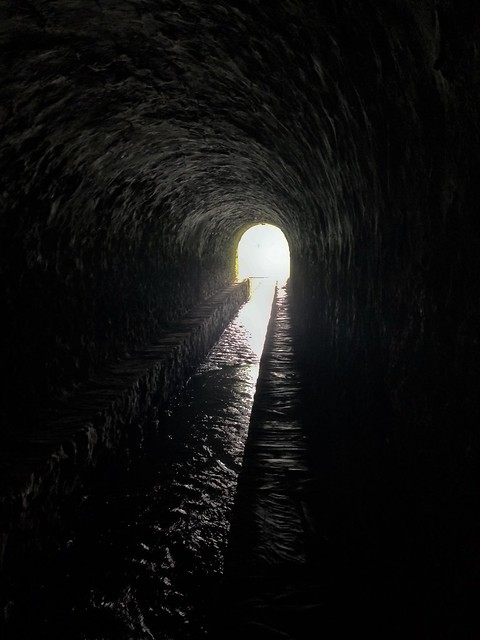 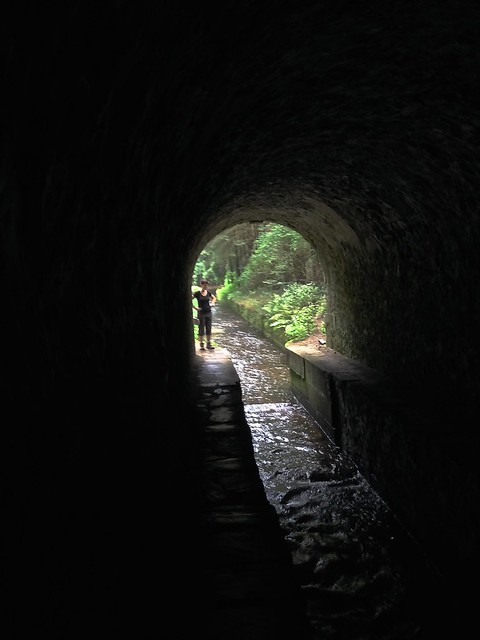 I reached the far end of tunnel, and discovered a small metal platform crossing the water. 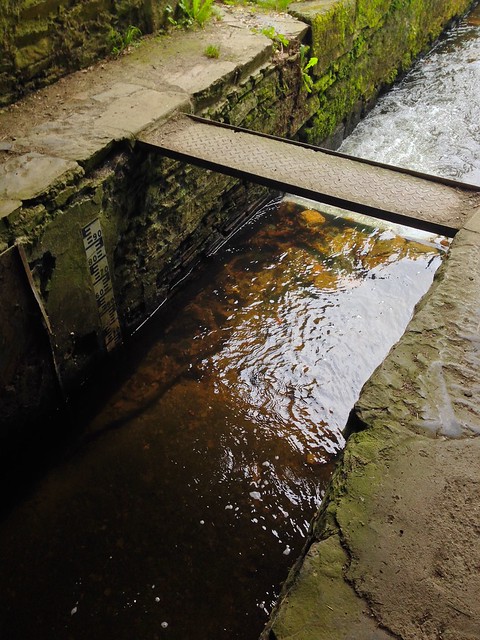 I stood on the middle of it and saw it: The Age of Reason: 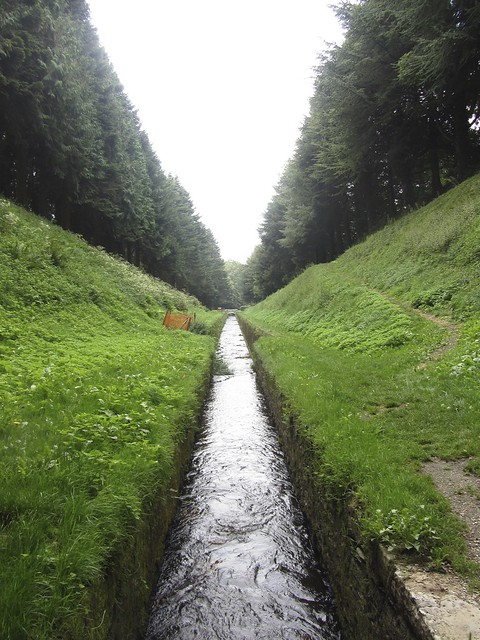 Here was nature tamed and adapted into symmetry and useful order. Of course, the edges have been smoothed and softened by several centuries of nature taking some of her own back.

I turned around and carefully made my way back to the other end of the tunnel and we continued onward.

Our campground for the night was further down along the rigole, so we followed the path alongside it through the woods. 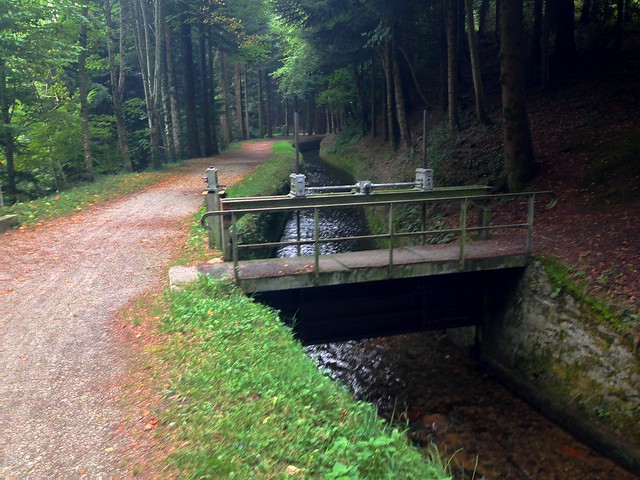 This made for a lovely walk, under the tall trees and with the rigole burbling along beside us on its flagstone and brick bed. 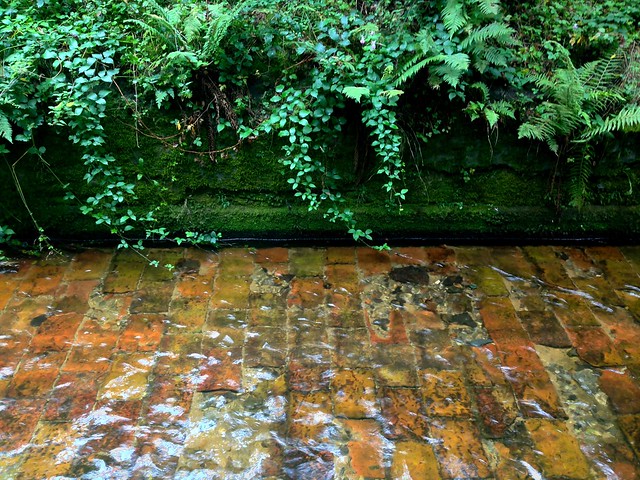 We made it to our campground in good time, set up our tent, and relaxed for a while with "a loaf of bread, a jug of wine, and thou". 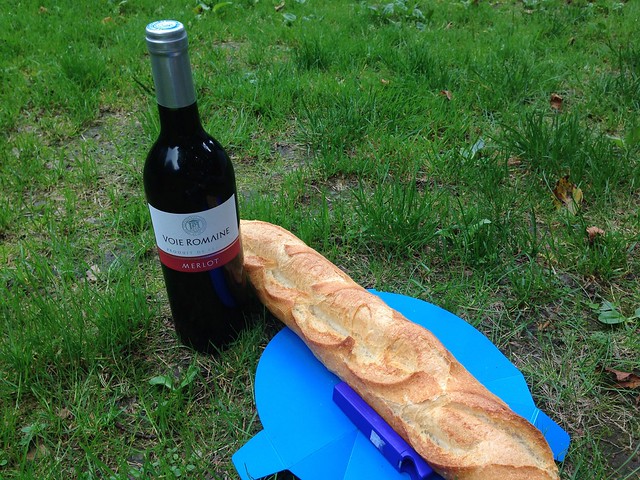 We then went back into town, passing yet more beautiful houses, all covered with vines and flowers. 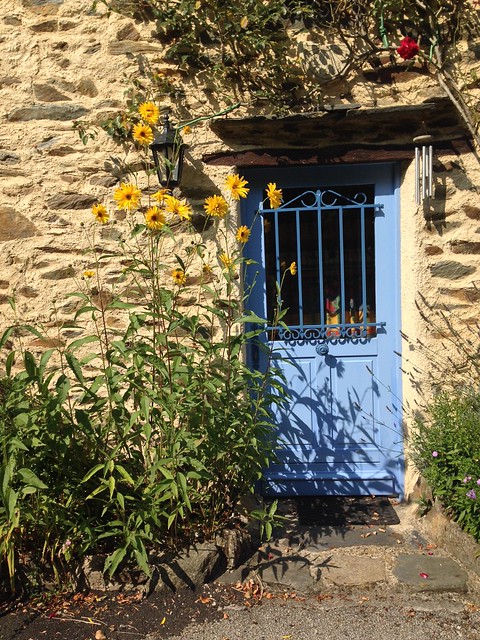 We had a late afternoon tea and fine bread with finer spreads at the delightful Salon de Vauban. 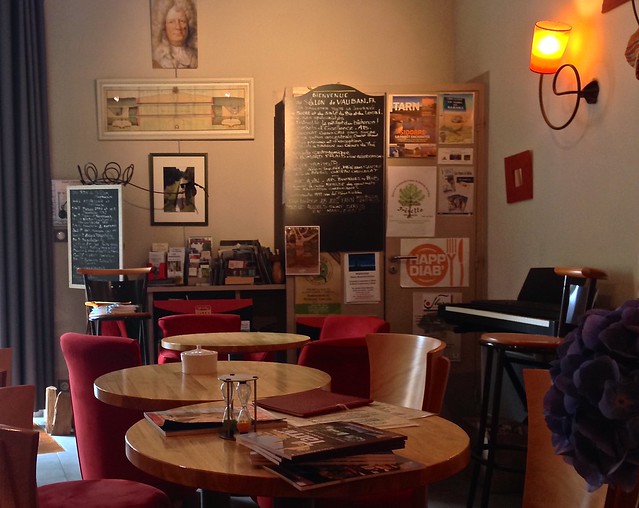 (Note on the wall you can see a poster of the plans for the tunnel I had gone through earlier in the day. We even bought a copy to bring home, along with some excellent cocoa mix.)

Back at the campsite, I spent the evening near the "Acceuil" trying to sync my photos via very slow wifi (not unusual for France, it turned out), and catching up on my diary in Remembary. 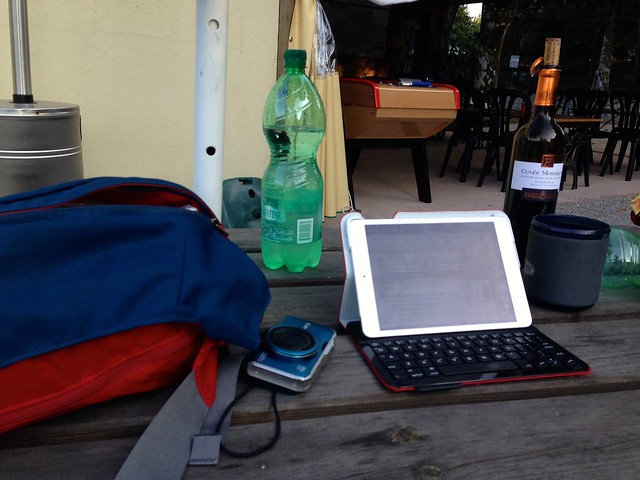