If this article seems too TL;DR for you, just full-screen this Flickr slideshow instead.

The whole set can be found here - check out the map, where I've managed to figure out where most of the pictures were taken. Don't forget to use the arrows near the bottom of the map page to page through the picture sets.


This past July 21st, I had one of the most amazing days of my life. I took a trip in a single-engine plane from Fairbanks Alaska across mountains, plains, and tundra, to Flaxman Island in the Beaufort sea, where my great-grandfather Ernest de Koven Leffingwell had an exploration base 100 years ago.

This trip capped off a month of extraordinary travels for me, starting in Istanbul, almost two weeks in Berlin, and a long weekend in Edinburgh, Scotland. Because of complicated scheduling, I only had four days in Halifax in between returning from Europe and flying across the entire North American continent to Alaska. A lot of people find the midnight sun in Fairbanks disconcerting, but I had been in so many different time zones in such little time that I didn't really know what time it was anyhow.

The trip came about because Janet Collins, a recently retired map librarian who is doing research on Leffingwell, contacted my mother to see if she had any papers of his at home - and when she mentioned "you should come up to Alaska some time and actually see your grandfather's cabin," my mother said "sure - how about next summer?"

So, at around 8am on July 21st, we drove out to the small plane section of the Fairbanks airport where we met Kirk Sweetsir of Yukon Air Service and his fat-tired Cessna 185. 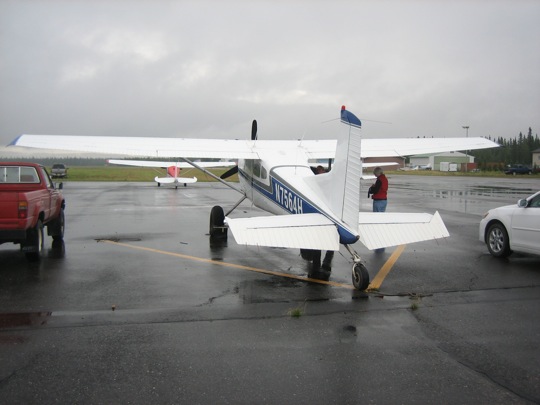 Among the many firsts on this day was the fact that this was the first time that I had ever been in a small four-seater plane like this. I sometimes get nervous flying, and I had been worried before the trip that I would find it nerve-wracking to be in such a small plane - but as it turned out I had no problem with it at all. A lot of this is probably due to Kirk, who is a great pilot with a huge amount of experience flying all around Alaska, Northern Canada, Greenland, and even Antarctica - and a summer day-trip under sun and partial cloud was, I think, hardly a great challenge for him. (So if you ever need someone to fly you around northern Alaska, Kirk is your man - a highly capable flyer and a great conversationalist).

Here we are taking off from Fairbanks Airport:

Fairbanks is the only airport I've seen with separate runways for commercial jets and private planes - and a man-made lake in between them for float planes.

We flew north out of Fairbanks through spotty cloud. This part of Alaska reminded me a lot of rural Nova Scotia - rocky hills with short evergreen trees - so I felt like I was on a Porter flight out of YHZ. We saw the edge of cottage-country and some still-operating open-pit gold mines. Within about fifteen minutes, we were past the world of roads - from here on the only ways to get around were on foot, with a boat, or in the air. The sky started clearing, giving the landscape below us a mottled look. Eventually, the hills started getting taller, and bits of naked rock started poking through the tops. The high-latitude angled sunlight cast dramatic shadows on the hillsides below: By this point of the day, I had already had several first-time-in-my-life experiences, had seen some spectacular vistas, and had taken over 100 photographs.

We had only been flying for about 40 minutes.

There was over seven hours more to go.


To keep from having one gigantic post, I'm breaking this out into several smaller posts over this week. Here is part 2
Check out my iOS app: