There's a lot of discussion in Halifax these days about downtown - especially in relation to the Convention Centre debate.

Just last week in a Chronicle-Herald editorial in support of the Convention Centre, it was mentioned that this part of downtown sorely needs the new centre because it is dying. The new phrase for Convention Centre supporters seems to be "reviving downtown Halifax". What most of these comments are really about is the sad current state of Barrington Street - specifically, the block between Sackville Street and Prince Street. Shop windows on both sides of the street are papered over, and many of the buildings are empty. It looks like a textbook example of urban decay, like something from the U.S. Rust Belt.

I know this stretch of Barrington well - because I work there. I have an office in the Roy Building. Here's my view: 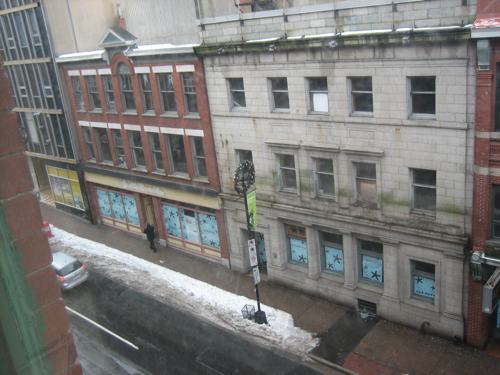 Barrington used to be Halifax's Main Street. All of the downtown life was here - the major retailers, movie theatres, bars. Everything happened here - even the V.E. Day rioters headed straight for Barrington, where all the good sacking was to be had.

When I arrived in Halifax two years ago, this stretch of Barrington had recently had the shock of losing its anchor in a two-building-wide Sam the Record Man. Soon after, Ginger's Tavern closed. A notable used record store closed a block away a few months later. Then a clothing shop at the corner. Then the popular "Peepshow Girly Boutique" across from the church. Then the large Carsand-Mosher photo store a few blocks away closed down. The worst sign was when the Tim Hortons at the corner closed. On the surface this seemed ludicrous: how bad does a Canadian downtown have to get to have a Tim Hortons die?

A pretty clear case of a dying downtown that nobody wants to live in? Like what happened to so many U.S. cities in the 1960s? Is Halifax turning into Detroit? Should it all just be turned back into farmland?

Actually, Barrington is a victim of a combination of factors - none of which have anything at all to do with a 'failing' downtown.

Besides, only half of this block of Barrington is dead. Here's my view in the other direction: 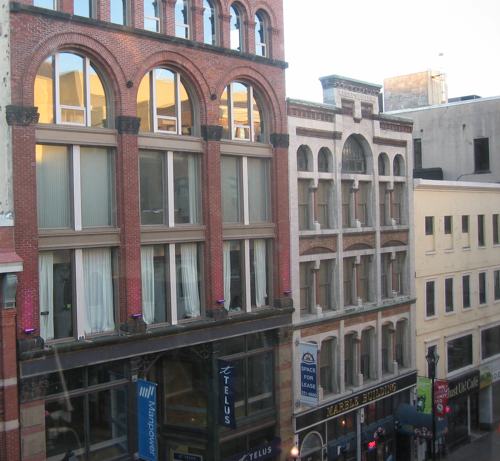 In the last few months, the old Tim Hortons space has become a Starbucks Coffee, and just last week the Obladee wine bar opened up across the street and - according to their Tweets - have been packed every night. The 'girly boutique' space is now home to Oddjects, the flagship first store of a chain started by the ex CEO of the giant A&P grocery chain. Crowded wine bars and Starbucks and shops opening here before they open in Toronto and NYC are not exactly a sign of urban decay. While I wish Starfish would open the ground-level shop spaces to small-scale retailers, they are at least using the space for public art and innovative advertising.

The trend these days is that lots of 'Creative Class' professionals enjoy living and working in vibrant downtowns. Once this Convention Centre situation is resolved and building actually starts - either of a Convention Centre or something else, Barrington will do just fine. In fact, I can see it in five to ten years as once again the heart of the city. Condos will mean that lots of people (rich people, no less) will be living and working on the street. It will be a lot more like Spring Garden and Dresden Row are now - but with prettier building fronts.

So don't let the false impressions of Barrington get to you - and certainly don't let anyone use its current state as an argument for somehow 'saving' downtown with some expensive oversized taxpayer-funded project.