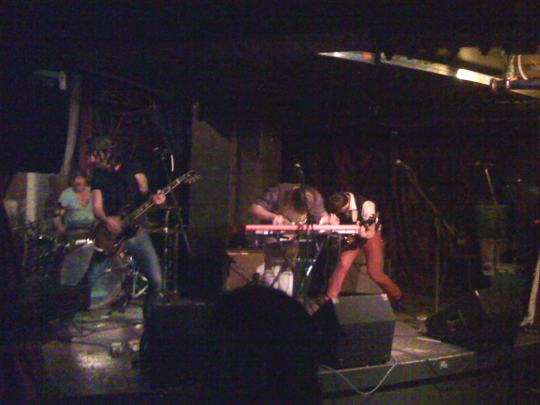 I've liked Bend Sinister a lot, ever since discovering them in early 2009 - but after seeing them live, I like them even more.

While most Indie bands these days are going back to the New Wave sounds of the 80s, the no-fi alternative of the early 90s, or the folk-rock of the 60s, Bend Sinister (the name refers to either a heraldry term or the title of a Nabokov novel - or both - awesome, whichever it is) harken to the smart power-pop of 70s, of performers like Queen, Elton John, Supertramp, Meatloaf, Steely Dan, and Boston.

Some indie rock types may think this sounds like a middle-of-the-road classic rock nightmare - but I think Bend Sinister are just shameless about their enthusiasms. Besides, hipsters, this is the music that was big when people were wearing porn-staches and leather vests without irony.

Bend Sinister manage the rare trick of clearly showing its musical inspirations while still sounding fresh and interesting. Listening to their full-length LP Stories of Brothers, Tales of Lovers, you sometimes feel like you're listening to a mash-up artist like Girl Talk: you recognize the shape of a Pink Floyd chord progression, and then a Steely Dan jazz sound, then the Rhodes piano of Supertramp, then the backing 'whoop' of "Who Are You", Brian May's double-tracked guitar, and even touches of the Beatles' "She's so Heavy".

This pastiche could get annoying after a while, but Bend Sinister don't just mimic the styles of this era - they've also picked up the quality songwriting chops. Like many of their forebears, they come from a progressive rock background and still value nimble musicianship, but instead of indulging in flabby 20-minute epics, they use their chops to add variety and excitement to sharp and catchy pop songs.

In the current Indie-rock world, there's a strong push towards muddy playing and production (I'm not going to name any names, but listen to CBC Radio 3 any time), probably because it seems more 'alternative' and 'authentic' - and while I can respect this at some level, I just don't find it very much fun to listen to (if I want bad singing to out-of-tune guitars, I can do it myself at home). Bend Sinister, on the other hand, are shamelessly tuneful. Their recent albums also have really great-sounding, rich production that brings out the fullness of their sound (another 70s throwback?)

Consider "The News", which opens Stories of Brothers, Tales of Lovers. It starts with a lone whistle, and then explodes into an energetic overture before settling down into a jaunty piano tune, punctuated with stabs of guitar and tight harmonies. The lyrics begin, unsurprisingly enough, with a direct quote from the Beatles.

You can hear the whole song on their found-footage YouTube clip.

I don't know about you, but this music makes me giddy - when I first got the album, I listened to it on repeat to the exclusion of all else for several weeks.

Music like this belongs on a big stage - I could imagine it opening a Rock Opera or some kind of stage musical. It would sound great filling a stadium, accompanied by a laser light show and maybe some flash bombs. I saw it performed in a low-ceilinged underground tavern on Argyle street with maybe about 60 people.

I was concerned that they might be disappointing live - or maybe wouldn't give much of a performance, since they were the first slot in a three-band lineup and probably didn't have that many fans in town. I've fallen hard out of love with some bands because of sloppy, tired live shows - and I hoped I wouldn't be disappointed this time.

Well, I was happy to be wrong. Bend Sinister brought their A game to the Seahorse. They started with huge energy and kept it throughout their set. They each played super well as individual performers, and were psychically tight as an ensemble. I had worried that Bend Sinister wouldn't be able to recreate the sound and the musicianship of their albums - but they sounded even better. When they played CT, one of their trickier songs, with a fearsome drum part and lots of tempo changes, they played it faster than on the album. They were making an awesome sound, and you could tell that they knew it, and were having a great time.

The crowd, which had probably come to see one of the later, more local bands, was quickly won over, and had swarmed the space in front of the stage by the second song. I have to make a quick comment on Halifax crowds: they actually seem to be there to enjoy the music. I've been to a lot of Toronto shows where the crowd seems to consist mostly of hipsters standing around either with their arms crossed wondering what Pitchfork will say about the band, or blocking everybody else's view with their smartphones or fancy DSLRs, too busy filling up their Flickr and Facebook feeds to actually enjoy the show. I like to think that the Halifax crowd was more engaged just because Bend Sinister was awesome - but it probably has something to do with east coast music audiences.

They finished with a cover of Supertramp's "Logical Song" - yes it's a classic rock radio staple with a soccer-mom-friendly chorus, but it also finishes with an extended jam over a great rhythm pattern - which Bend Sinister ran with all the way.

After the show, we bought some CDs and T-Shirts directly from Dan, the frontman of the band, and even had a friendly chat with him. I don't think I've ever had a band that I like so much play such a small venue and be so approachable.

Anyhow - Bend Sinister are coming out with a new album in the next few months (they played some songs from it at the show, and they're really good), and they are doing a lot of touring. If they come to your town, you should definitely check them out.